Harry Truman to Donald Trump: "If You Want a Friend in Washington, Get a Dog!"

Suzy Evans is a literary agent, attorney, and author who holds a Ph.D. in history from UC Berkeley.  Her books include "Machiavelli for Moms" (Simon & Schuster) and "Forgotten Crimes: the Holocaust and People with Disabilities."  Find Suzy on Twitter @thehistorychef and at suzy@dijsktraagency.com 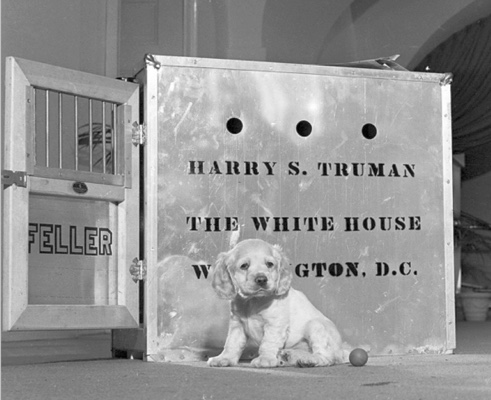 In terms of character, conduct, temperament, and malignantly narcissistic tendencies and tone, Donald Trump is like noother American president — and he differs from his more dignified predecessors in another simple but significant way: he is the only chief executive since Harry Truman who doesn’t have a family pet in the White House.

Ever since Thomas Jefferson brought his singing mockingbirds into the Executive Mansion, pets have humanized and revealed the unique personalities and character traits of our chief executives. At times, presidential pets have even forged new White House traditions and found themselves embroiled in political controversy and scandal.

Abraham Lincoln and his wife Mary were great animal lovers and allowed their young sons to keep all sorts of pets on White House grounds. Among other animals, they had three cats, a dog named Fido, rabbits, horses, and two rambunctious billygoats named Nanny and Nunko.

Another was a wild turkey named Jack with whom Lincoln’s young son Tad played with daily. When it came time for Jack to be sacrificed for a holiday dinner, Tad supposedly begged his dad to spare the turkey’s life, and, to this day, the White House maintains the tradition of pardoning a turkey each holiday season.

Calvin Coolidge and his wife Grace also allowed dozens of pets to roam freely on White House grounds. In addition to dogs, cats, and dozens of exotic birds and wildlife, including thirteen Peking ducks, two African lion cubs (named Tax Reduction and Budget Deficit), a donkey, canaries, a wombat, and an Australian wallaby, the Collidges had a rambunctious pet raccoon named Rebecca.

Rebecca had been sent to the Coolidges to be part of their Thanksgiving dinner but the president was so delighted with her that he had a little house built for her on the White House lawn and he could often be seen walking her on a leash after his afternoon paperwork was done. 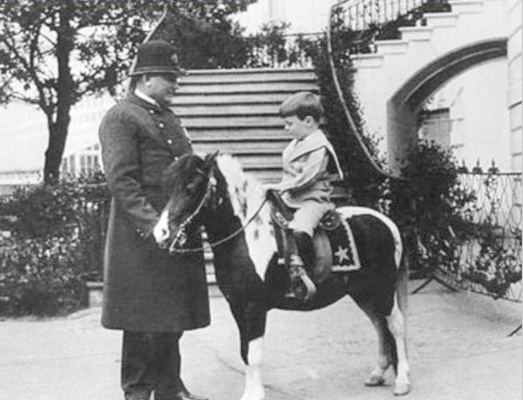 When Theodore Roosevelt and his rambunctious young family moved into the White House in 1901, they brought along a menagerie, including a black bear named Jonathan Edwards, a badger named Josiah, a blue macaw named Eli Yale, a one-legged hen named Baron Spreckle, a garter snake named Emily Spinach, and a pony named Algonquin that took a ride in the White House elevator.

In November, 1940, a cute, black Scottish terrier puppy arrived at the White House as a gift for Franklin Roosevelt and his family. At first, the dog’s name was "Big Boy," but the president soon renamed him “Murray the Outlaw of Falahill” after a distant Scottish ancestor.

One of the most famous presidential pets, Fala, as he was nicknamed, accompanied the president just about everywhere and quickly became a part of his public image. Fala even travelled overseas with Roosevelt and was often seen meeting world leaders, including Mexican President Manuel Camacho and Winston Churchill.

Thrust as he was into the national spotlight, it’s not surprising that Fala became embroiled in a political controversy. During the 1944 presidential campaign, Fala accompanied his master on a diplomatic trip to the Aleutian Islands. Shortly after Roosevelt returned home, rumors began circulating that Fala had been left on an island and that the Navy had to send a destroyer to retrieve him.

Capitalizing on this rumor, Republicans accused Roosevelt of wasting millions of taxpayers' dollars in the effort to bring his beloved dog home. Responding to these accusations, FDR delivered his famous “Fala Speech” at a campaign dinner in Washington D.C., before the International Brotherhood of Teamsters, Chauffeurs, Warehousemen and Helpers of America.

“These Republican leaders have not been content with attacks on me, or my wife, or on my sons,” Roosevelt quipped. “No, not content with that, they now include my little dog, Fala. Well, of course, I don't resent attacks, and my family doesn't resent attacks — but Fala does resent them…I am accustomed to hearing malicious falsehoods about myself... But I think I have a right to resent, to object, to libelous statements about my dog.” 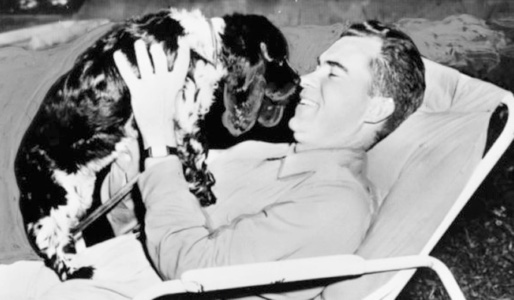 And then there's Richard Nixon’s famous Checkers Speech. As Dwight Eisenhower’s running mate in the 1952 campaign, Nixon had been accused of accepting illegal gifts and he later appeared on television to deny the allegations.

In his nationally televised speech, Nixon described his finances and revealed that his family had received a black-and-white cocker spaniel named Checkers as a gift.  “And you know, the kids, like all kids, love the dog,” Nixon said, “and I just want to say this right now, that regardless of what they say about it, we’re gonna keep it.”

The speech was an instant hit as it helped “Tricky Dick" mend his public image and gain support from Republicans who had been calling for his head. When Eisenhower later greeted him at an airport in West Virginia, he said, "Dick, you're my boy.” Six week later, Eisenhower and Nixon defeated the Democrats in a landslide.

As dark clouds of controversy and suspicions of Russian collusion — and even treason — swirl around the White House, our increasingly embattled and isolated “president” might be well-advised to adopt a family pet to help deflect criticism from enemies who are calling for his removal or impeachment. Or, as Harry Truman would wisely advise, “If you want a friend in Washington, get a dog!”