What Has Happened in Detroit Comprises a National Emergency

Scott Kurashige is the author of The Fifty-Year Rebellion: How the U.S. Political Crisis Began in Detroit (University of California Press, 2017) and a professor at the University of Washington Bothell. 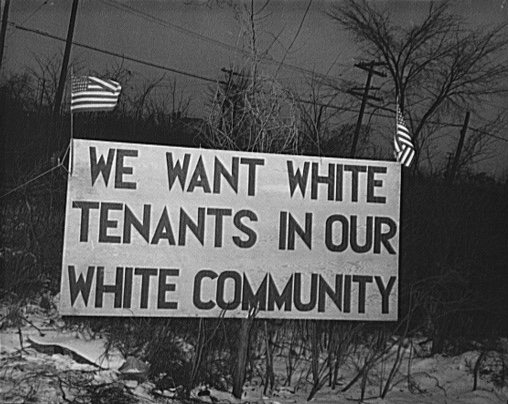 The racism that blacks fought against in 1967.  A sign from suburban homeowners in Detroit 1942.

The records indicate that a civil disorder began in Detroit on July 23, 1967 and ended July 27. The reality is that shockwaves still reverberate throughout the city, the region, and the nation a half-century later. While we must remember what occurred during that four-to-five day period, it is crucial to recognize that our society has never resolved the underlying contradictions that tore the city apart. 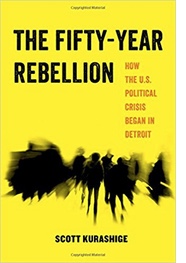 Racial discrimination. Police brutality. Economic dislocation. The issues deemed to be at the root of dozens of 1960s uprisings remain at the center of the nation’s political and cultural divide. This chasm is reflected in the “riot” versus “rebellion” debate.

“We in Detroit called it the rebellion,” said the late philosopher-activist, Grace Lee Boggs, “because we understand that there was a righteousness about the young people rising up.” Although it was neither coordinated nor linked to a specific agenda, Boggs saw it as the political expression of a community fed up with police they saw as an occupying army and of workers deemed disposable by an economic system seeking increased profits through automation, outsourcing, and union-busting.

Prompted in large measure by the Detroit uprising, President Lyndon B. Johnson announced the creation of the National Advisory Commission on Civil Disorders—better known as the Kerner Commission—on July 27, 1967. A bipartisan body selectively composed of elites, the commission shied from explicitly labeling the disturbances in Detroit, Newark, Cincinnati, or elsewhere “rebellions.”

Nevertheless, the Kerner Commission surprised and irritated LBJ by calling for sweeping reforms to combat “white racism” and expansive, unprecedented social investments in employment, education, welfare, and housing. To many observers, it signaled the need for nothing less than a domestic Marshall Plan to uplift millions living in impoverished urban ghettos and finally create a true notion of equal opportunity.

Much of the nation, including President Johnson, ignored the commission’s recommendations. For Richard Nixon and an ascendant group of conservatives, the civil disorders were “riots” that exposed the fallacy of bleeding heart liberalism and necessitated a restoration of “law and order.” Long after the fires were extinguished and the so-called subversive groups disbanded, the rightward policy drift away from social democratic measures and toward the repression and incarceration inherent in the “war on crime” brought new levels of devastation to deindustrialized urban communities. Detroit’s poverty rate—16 percent in 1967—now stands at 40 percent.

Far from “saving” the city, the 2013-14 Detroit bankruptcy has been widely misperceived as a “bailout.” Instead, it comprised the ultimate triumph of right-wing policy over a city that is over 90 percent nonwhite and has regularly voted over 90 percent against GOP candidates for president.

Working-class neighborhoods have been devastated as nearly 140,000 property owners suffered foreclosures from 2005 to 2014,. The bankruptcy, however, guaranteed that over $250 million in federal funding were directed toward demolition rather than supporting distressed homeowners. For too many Detroiters, this is a replay of the postwar “slum removal” measures that critics blasted as “Negro removal.”

The closure of nearly 200 Detroit public schools under a separate state takeover begun in 1999 has further reinforced a sense that black and working-class residents are under siege. On balance sheets, children have become the key source of revenue for Michigan’s $1 billion charter school industry that is managed predominantly by for-profit corporations. While the Obama administration did not do enough to staunch the bleeding, Betsy DeVos pushed aggressively for these outcomes. As Secretary of Education, she now hails Detroit as a model of success for her national agenda.

As in 1967, Detroit serves as the ultimate symbol of a nation at a crossroads. One path leads toward authoritarian plutocracy. A group of investors has even hatched a plan to turn the city’s iconic Belle Isle Park into a private city-state for millionaires.

Grassroots organizers are blazing an alternative path. Going beyond resistance and rebellion, they are advancing visions of participatory democracy in practice by creating socially-responsible businesses, urban farms, nonprofit cooperatives, housing collectives, and education modeled on the “freedom schools” of the civil rights movement.

Fifty years ago America made a fateful choice. It’s now our turn to decide.