Yanek Mieczkowski is a Visiting Assistant Professor at the University of Central Florida.  His books include Eisenhower’s Sputnik Moment:  The Race for Space and World Prestige (2013), Gerald Ford and the Challenges of the 1970s (2005), and The Routledge Historical Atlas of Presidential Elections (2001). 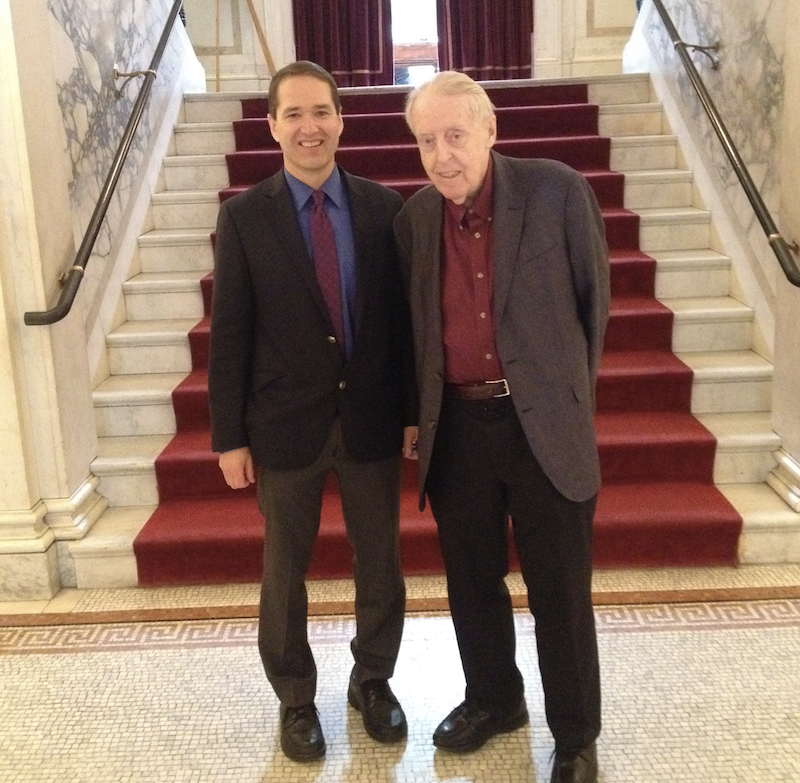 ● Historian and Novelist Thomas Fleming Has Passed Away at Age 90

One of America’s most prolific historians is gone.  On July 23, 2017, Thomas Fleming died at his home in New York City, just three weeks after his 90th birthday.  Tom was a wonderful friend and mentor to many historians, including me.

Whenever I traveled and witnessed history, I liked to communicate it to Tom, and he often reciprocated with a tale that enriched my own experience.  When I toured the Harry Truman home in Independence, Missouri, for example, I mentioned my visit to Tom, knowing that he had worked with the 33rd president in that residence.  I remarked that I was struck by Truman’s 1970s-vintage Chrysler that remains parked in the garage.  Tom replied that he remembered that car:  Truman had handed him the keys and allowed him to use it.  When Tom was returning to the house one evening, a Secret Service agent stopped him, demanding identification and asking why he was driving the former president’s car.

That story encapsulates Thomas Fleming’s profound relationship with history, and he contemplated penning a memoir on what he called his “encounters with history.”  His life embodied the craft—he lived through history, reflected deeply on it, and wrote about it with passion.  Friendship with Harry Truman was one of Fleming’s encounters with history that has deepened Americans’ understanding of their past, adding insights that most history books have missed.  For instance, although the conventional wisdom is that Truman never regretted his decision to drop atomic bombs on Hiroshima and Nagasaki, the former president once told Fleming that he indeed harbored misgivings.

Fleming’s own World War II experience provided a personal angle to that conflict’s denouement.  In 1945, while still a teenager, he enlisted in the navy and served in the Pacific theater.  When the war concluded, his cruiser, the U.S.S. Topeka, steamed into the bay below Tokyo, where he saw gun batteries that would have pummeled American troops during an invasion.  Glimpsing those weapons, he and his crewmates agreed that they were lucky for those terrible atomic bombs.  As he surveyed Tokyo, Fleming saw just four stone houses that stood intact.  The city’s wooden buildings and homes were all obliterated.  “They paid a huge price for that war,” he observed.

Fleming’s wartime experience and work with Truman enhanced his appreciation for military and political leadership, staples in his historical scholarship.  He also gained a collaborator.  Fleming became friends with Truman’s daughter, Margaret, and he ghostwrote two books for her, the best-selling biography, Truman, and The President’s House, a history of the White House.

Fleming’s encounters with history and deep knowledge of it made his books a treat for readers, who got to enjoy brisk prose and historical figures so richly described that Fleming seemed to breathe life back into them.  (I assign his books in my courses, and one graduate student remarked that the prose was so gripping and fast-paced that he had to make sure the Fleming he was reading was “Thomas” and not “Ian,” who wrote the James Bond spy novels.)  In both writing and conversation, Fleming always summoned the right anecdote.  When I mentioned to Tom that the media treat twentieth-century presidents like Franklin Roosevelt, John Kennedy, and Ronald Reagan charitably in part because their charisma and wit created a “fun factor,” he observed that George Washington generated good political theater and might have fared well in today’s media age.  As Washington addressed Congress during the fallout after Jay’s Treaty, when the press lacerated his administration with criticism, the president spoke cordially, showing a serenity that stunned his audience.  Tom called it “the most extraordinary performance of George Washington’s life.”  But he added that even frail, soft-spoken James Madison had colorful moments.  During a dinner party at Thomas Jefferson’s Monticello home, Madison laughed so hard at one of his own stories that he fell backward out a window (he landed safely on the lawn).

Fleming’s knowledge of all presidents illustrated his tremendous versatility as a historian, and his protean interests went far beyond the White House.  He loved the U.S. Army—perhaps ironic for a naval veteran—and he researched West Point and interviewed generals to produce a book, West Point:  The Men and Times of the U.S. Military Academy.  He ventured further afield by writing a historical novel, The Officers’ Wives, which became one of his best-selling books, basing characters on real army officers’ wives whom he consulted.  Eventually, he wrote two dozen historical novels, every one requiring meticulous research.  To gather background material for a World War II novel, Fleming traveled to Guadalcanal, site of one of the Pacific’s bloodiest battles.  While surveying the scene that once screamed with fighter planes, ships, and combatants, he heard a voice behind him murmur, “It’s terrible to think of all the men who died here.”  He whirled around to see a stranger dressed entirely in white.  “He looked like a ghost,” Fleming recalled, but the man explained that he was a battle veteran who had returned for a reunion.  It was another encounter with history, and the man provided firsthand insights for Tom’s subsequent novel, Time and Tide.

But it was nonfiction where Fleming made his greatest mark.  His specialty was the American Revolution and its aftermath, and he churned out numerous works on that era, including Liberty!, which accompanied a PBS mini-series, and Duel, about the fateful encounter between Alexander Hamilton and Aaron Burr.  His versatility enabled him to tackle other time periods deftly, including the antebellum era (A Disease in the Public Mind:  A New Understanding of Why We Fought the Civil War) and the twentieth century (The Illusion of Victory: America in World War I and The New Dealers’ War:  FDR and the War Within World War II).

Fleming was extraordinarily prolific.  He published a new book every two to three years, each one exhaustively researched, and he wrote dozens of articles for magazines such as American Heritage and Military History Quarterly.   I once asked him how he achieved such productivity.  When he worked as a journalist (Tom had majored in English at Fordham University), he fell in love with history writing, getting up early and working late into the night to write.  His editor at Cosmopolitan magazine, Fulton Oursler, advised him to write four pages a day.  “Imagine all the food you consume in a year,” Oursler said.  “You can’t eat it all at once.  Instead, you eat it little by little, every day.  So write four pages a day.”  That quota became Fleming’s baseline, spurring him to produce a large canon of works, totaling nearly fifty books in his career.  He became a celebrated and beloved figure in New York City’s literary community (where his wife Alice is an author of young adult books), writing in Manhattan during most of the year and repairing to his Connecticut home during the summer.

While Fleming is now gone, his books remain, and their special value is the fresh insights they offer.  As an independent scholar, Fleming could defy historical consensus.  Whereas some history books view George Washington as an uninspiring general, Fleming maintained that he was more effective than his battlefield defeats suggest: he crafted a deliberate strategy to wear down the British, sticking with it until it worked.  (Fleming’s final book, A Strategy for Victory—which he completed just before his death—addresses this concept.)  A Disease in the Public Mind offers precisely what its subtitle proclaims—A New Understanding of Why We Fought the Civil War, arguing that abolitionists’ stirrings exacerbated southern fears of a race war and propelled the nation toward conflict.  Fleming’s The Illusion of Victory and The New Dealers’ War challenge the accepted historiography on the wartime leadership of Woodrow Wilson and Franklin Roosevelt, respectively.

Fleming could even tear down the edifice of his own, earlier constructions.  His first biography of Thomas Jefferson, The Man from Monticello, which he published in 1968, was an admiring portrait of the Virginia statesman (“Jefferson practically walked on water in that book,” Fleming remarked).  But new historical evidence and careful deliberation forced Fleming to reappraise his opinion.  Nearly a half-century later, The Great Divide: The Conflict Between Washington and Jefferson That Defined a Nation, presents a scalding view of Jefferson, showing him a schemer who was “ready and willing to demolish George Washington’s reputation” even while serving as his secretary of state.  Fleming understood an important duty of historians:  we should rethink what has been written about the past, including our own views of it.

I once told Tom that reading his books was like looking at historical events through a prism, bending light in new, different directions.  It was an intriguing experience, and for him to arrive at such conclusions required courage and conviction.  How, I asked, did he manage such bold interpretations?

Tom reached into his pocket and pulled out a small, antique device.  I had never seen anything like it before.  “This is a baseball umpire’s clicker,” he said.  “It belonged to my father, and I carry it with me for good luck.”  Tom went on to say that he lived by the ideal that the clicker embodied.  When it came to rendering historical judgments, he followed the umpire’s creed: “I call them as I see them.”  Historians will always do well by following Thomas Fleming’s example.