When the USSR Waged War Against Israel. (No, that’s Not a Misprint.) 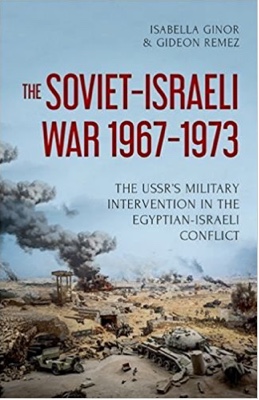 An interview with Gideon Remez.

Isabella Ginor and Gideon Remez are Associate Fellows of the Truman Institute, Hebrew University of Jerusalem. Their previous book, Foxbats over Dimona: The Soviets’ Nuclear Gamble in the Six-Day War (Yale, 2007) won the silver medal in the inaugural book awards of the Washington Institute for Near East Policy. Their latest book is The Soviet-Israeli War, 1967-1973: The USSR’s Military Intervention in the Egyptian-Israeli Conflict (Oxford University Press, 2017).

Karl Pfeifer: The Soviet-Israeli War? Isn’t the title of your book exaggerated? It’s well-known that the USSR supported Egypt in its conflict with Israel, but was there really a direct clash between Soviet and Israeli forces at the level and duration that can be termed a full-scale war?

Well, that is precisely what our book is aimed to prove, and it :oes differ radically from the conventional notions about this period in this and other major respects. The Soviet military presence in Egypt is usually described as “advisers” or “technicians.” But the chief adviser, at the rank of lieutenant-general, also doubled as “commander of the Soviet forces group.” A total of over 50,000 Soviet servicemen, in integral Soviet formations up to a full air defense division, were posted to Egypt during this period. They operated the USSR’s most advanced weapons – some of them still experimental, not yet supplied even to Warsaw-Pact allies – in a head-on clash with Israeli forces, which turned the Suez Canal front into the hottest arena of the Cold War. So we think it was no less than a Soviet-Israeli war, the only time when Israel was directly pitted against a global superpower.

So, by the way, think the Soviet veterans who took part in this conflict, and whose memoirs we first introduced into western scholarship as source material for historical research. This literature appeared, after the demise of the Soviet Union, as part of these “internationalist” soldiers’ struggle to gain recognition as combat veterans, as well as proper honors for the dozens of their comrades who died in this war. They had been denied this recognition because the USSR never admitted it had an expeditionary force in Egypt.

So maybe they are over glorifying their exploits? Can you be sure of their veracity?

Of course this is not the only body of sources that we have relied upon. We have been gathering the veterans’ accounts for over 20 years; their number and detail are sufficient to cross-check them not only against one another, but also against newly accessible Israeli, American and other sources. For example, many of the testimonies before the Israeli commission of inquiry about Israel’s disastrous unpreparedness for the Yom Kippur War were only recently declassified, and there were thousands of pages to sift through – yielding some important information. There were also otherwise inaccessible Egyptian documents that were captured by Israel in the 1973 war. Overall, the Soviet veterans’ accounts proved to be remarkably reliable, once we applied some critical tools. For instance, journals that they kept at the time –in violation of standing orders – turned out to be more accurate than recollections written down after decades.

As a rule, the veterans recorded accurately what they actually did or witnessed; what they were told by their superiors or politruks (political officers) about things that the servicemen themselves couldn’t know first-hand is another matter. The latter is very interesting in itself as a reflection of Cold War politics, but factually spurious. Thus the Soviets were told, and evidently believed, that the Israeli planes they were fighting against, and sometimes shot down, were piloted by American volunteers or mercenaries – which was a propaganda lie. But the Soviets’ descriptions of the actual battles checks out very well against the Israeli versions.

What was the Soviets’ impact on the outcome of the fighting?

It determined the outcome in large measure. The period that our book covers is conventionally considered as including three distinct wars: the Six-Day War in June 1967; the War of Attrition from March 1969 to August 1970; and the Yom Kippur War in October-November 1973. We found these to have been one continuous conflict, at varying degrees of intensity. The debacle that Egypt suffered in 1967 with the loss of Sinai to Israel was also a major setback for its patron, the USSR’s standing among its clients as well as a blemish on the reputation of Soviet weapons. So within days, both leaderships – each for its own motives – resolved to score a military revanche before any political settlement with Israel. The planning, training and rearmament for this purpose went on systematically until preparations

Israel, and particularly the government of Golda Meir, are often blamed for ignoring or rejecting Egyptian initiatives for at least an interim settlement.

Israel can’t be absolved of responsibility – as a result, in part, of hubris after the 1967 triumph – for not taking its own initiatives or not calling the Egyptians’ bluff. But as we found, the supposed peace feelers were mostly a smokescreen for war preparations. The War of Attrition, for instance, was launched as part of these preparations for Egypt’s ultimate offensive across the Suez Canal; when it did not go well for Egypt, the massive Soviet intervention (whose codename, Operation Kavkaz, we were first in the west to document) was launched, and within a few months it had achieved its purpose. Soviet SAMs were shooting down Israeli planes – and especially their irreplaceable crews – at an unsustainable rate. Israel not only had to accept a ceasefire in August 1970, but it (and the United States) could do nothing when the Soviets and Egyptians advanced the SAM batteries to the canal bank, thus creating a no-fly zone for Israel over the canal and into Sinai. This was an essential precondition for the Egyptian cross-canal offensive, which was launched three years later with full Soviet collusion and support.

That’s another myth which our book debunks: that due to détente with the United States, which peaked at the Moscow Summit of May 1972, the USSR denied Egypt the offensive weaponry for the attack on Israel. This supposedly caused a rift with Sadat, who kicked the Soviets out and shifted to the US camp. But we prove that this never happened. The flow of Soviet offensive weapons never stopped. Thousands of Soviet servicemen did leave Egypt in 1972, but these were the regulars of the Soviet expeditionary force, who – as we just mentioned – had accomplished their mission and were amicably repatriated. This was negotiated for months not only between Cairo and Moscow, but also with Washington, that is with Henry Kissinger. The Soviet advisers with the Egyptian armed forces remained, to continue training and weapons induction for the offensive. Both the Soviets’ own accounts and Egyptian documents prove this conclusively. The “expulsion” canard was inculcated by means of an elaborate deception exercise, which our book describes in detail. As in other cases that we address, two of the main culprits for spreading such misleading concepts as “fake news” and then for establishing them as “fake history” were Kissinger and Egyptian propagandist Mohammed Hassanein Heikal.

Now that you mention the US role, this is beginning to sound like the present-day Russian reentry into Syria and US response, or lack thereof.

Indeed, Russia’s action to ensure its naval bases – and now, air and land bases too – in Syria has a lot in common with its role in Egypt in the ‘60s and ‘70s, mutatis mutandis. In terms of a power base in the Mediterranean opposite the US Sixth Fleet, the Syrian ports of Latakia and Tartus now are quite analogous to Alexandria and Port Said as Soviet/Russian bases. The political-propaganda cover techniques are also remarkably similar. But the focus on Syria has deflected attention from the reestablishment of a Russian military presence in Egypt too. Sadat did turn against the Soviets well after the 1973 war, when he needed the US for the peace as much as he needed the USSR for the war. But at least two of the old Soviet bases in Egypt have been reactivated in the past year, so far on a modest but not at all negligible scale. Plus ça change…