T.J. Stiles has received Pulitzer Prizes for Biography and History, and a National Book Award for Nonfiction. A member of the Society of American Historians and a past Guggenheim fellow, he serves on the Executive Board of the Organization of American Historians. He was interviewed on HNN in March. 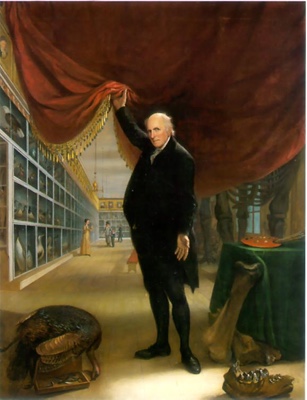 It is time we built a Museum of the History of American History.

If Donald Trump's comments on the Charlottesville march and murder did nothing else, they awoke much of America to the ongoing battle over the public memory of the Civil War. The resulting outrage shows that memory matters. Memory makes meaning. Memory makes politics.

And politics makes memory. So does the formal study and writing of history, of course, but the relationship between the discipline of history and memory—or broadly shared cultural assumptions—is complicated. Conventional wisdom shapes historians, who often reinforce it with their work; on the other hand, many challenge it by marshaling evidence and arguments that, on occasion, change the public mind and seep back into politics. I don't mean, then, that we need a historiography museum, but one that traces the intertwining of the popular imagination and the professional study of history. It would go beyond the question, "What happened?" to ask "How did we come to believe that this is what happened?" The answer to the latter can be just as important as to the first.

I'll give an example. During my research for my first biography, Jesse James: Last Rebel of the Civil War, I interviewed the great-grandson of Adelbert Ames, an intended target of the James-Younger Gang in their raid on Northfield, Minnesota, on September 7, 1876. That descendant was George Plimpton. In his cluttered townhouse on a cul-de-sac in Manhattan, as far east as the East Side goes, he told me a story of disputed historical memory.

During John F. Kennedy's presidency, Plimpton recalled, he attended a private function at the White House, the sort of dinner party usually described as "glittering." Afterward Kennedy led Plimpton and a small group on a private tour. At one point he pulled Plimpton aside and said, "George, I need to talk to you about your grandmother."

That was not a sentence Plimpton ever expected to hear from the president, but it resonates in 2017, as we struggle with the memory of the Civil War and its repercussions. Plimpton's grandmother, Blanche Ames Ames, had been pelting Kennedy with letters complaining about his treatment of her father, Adelbert Ames, in his Pulitzer-winning book, Profiles in Courage. The bombardment, Kennedy said, was beginning to "interfere with state business." (Plimpton relished the choice of words.) The writer promised to ask her to stop.

Ames was a remarkable man. He graduated from West Point in 1861, and received a promotion to brigadier general of U.S. Volunteers while still in his 20s. He fought with distinction in the Civil War, earning a Medal of Honor for his valor at First Bull Run. In Reconstruction, he served as military governor of Mississippi, where he appointed the first black officeholders in that black-majority state. He resigned from the army to become a U.S. senator and later governor of Mississippi, emerging as a leading voice for racial equality as he worked closely with such black allies as state legislator Charles Caldwell.

But a rising tide of white-supremacist violence overwhelmed this experiment in multiracial democracy. In 1875, the state's Democratic Party essentially staged an insurrection—led in part by Lucius Quintus Cincinnatus Lamar, whom Kennedy would choose for a profile in courage. Caldwell took up arms against Lamar's forces and was murdered, along with countless of other black Republicans. Ames reluctantly resigned and left Mississippi in 1876.

Kennedy praised Lamar as a leader in healing the nation after the Civil War, and condemned his foe Ames as a corrupt carpetbagger. It infuriated Ames's daughter Blanche, who better knew the truth. Kennedy could not ignore her; as a suffragist, ally of Margaret Sanger, and philanthropist, she was a formidable figure in Massachusetts. But at Plimpton's request she relented, and wrote her own biography of her father.

But here's a twist. Kennedy drew on a stereotype in describing Adelbert Ames; he clearly did not consult what was then the standard history, Reconstruction in Mississippi, published in 1902 by James W. Garner. That work did not depict Ames as venal or corrupt. "His political opponents testify to his personal integrity, courteous demeanor, and his education and refinement," Garner wrote. "No well-informed Democratic politician ever accused him of peculation and plunder." The historian condemned Ames for different sins: an "over-confidence in the mental and moral ability of the black race, so far as their ability to govern themselves was concerned. He did not know that a superior race will not submit to the government of an inferior one."

Garner wrote his book as his dissertation for his doctorate in history from Columbia University. He worked with William Dunning, one of the nation's foremost historians, who established a school of interpretation that condemned Reconstruction in blatantly racist terms. Today historians believe that evidence, let alone humanity, proves that the Dunning School was terribly wrong. Yet it influenced Kennedy, and the public imagination to this day, layered with white Southern political rhetoric as well as such popular entertainment as Gone with the Wind. The stark racism of historians and Klansmen is mediated through the more palatable carpetbagger stereotype, which casts African Americans as ignorant dupes of wily Yankee manipulators, a myth that still undermines racial equality.

Would Kennedy have pushed more aggressively for civil rights if he had had a more accurate grasp of black politics during Reconstruction—or if he understood that his assumptions originated in bigoted history and the self-serving rhetoric of Southern "redeemers"? We can never know, but clearly a distorted notion of the South's past defined much of the political debate of the 1950s and '60s.

The opposite is also true. The histories crafted by W. E. B. Du Bois and others in the depths of the Jim Crow era helped to prepare the way for a new understanding of America. The writing of history has political—and moral—repercussions, which makes it so fraught. To discuss the role of slavery in the Civil War even now is guaranteed to result in a fight with descendants of Confederate soldiers who see any such talk as an insult to their forefathers' memory.

It's only natural to desire a reassuring history that tells us our ancestors did right and that all is as it should be, to resent "revisionist" historians who uncover what is dark and unpleasant. But if we are to do better, to understand what must change, we need the truth, as best we can find it—and an understanding of how it is that we hid that truth from ourselves.

A museum of memory need not be a Museum of Why America Is Terrible, either. Many aspects of our past have undergone bewildering gyrations of interpretation and regard. The stories of Alexander Hamilton the man and of his oscillating fortunes in national memory would make a fascinating exhibit. Nor should the museum pretend to present a definitive account. Rather, it might express the idea that all history is revisionist. It could be a museum that celebrates the questioning of assumptions and the search for more and better evidence.

It's even possible that some might find it rather uplifting. Distortions in our history have obscured many of our achievements and idealistic, even heroic figures. The Lamars of our imagination still hide the Caldwells and Ameses. A museum that looks at how we remember would help us to see distortions for what they are, and so better understand who we are, for good and ill.