Found at Last: A Real-Life East German Stasi Officer Who Sabotaged His Own Deadly Operation

Greg Mitchell's book The Tunnels: Escapes Under the Berlin Wall and the Historic Films the JFK White House Tried to Kill has just been published in a paperback edition by Broadway Books. 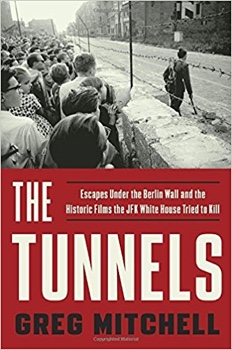 Many citizens of Germany, especially those who lived in the Communist-controlled eastern half of the country during the postwar decades of division, remain haunted by the excesses of the Stasi secret police. Probably no secret police network was ever as pervasive as the Stasi's, not even the Gestapo's, with informers within every factory and major business, at countless schools, and in some neighborhoods inside most apartment buildings. Listening devices and secret cameras were deployed widely. Brutal interrogations were common.

When the Berlin Wall was finally breached in 1989, Germans from east and west alike trashed the Stasi headquarters in Berlin and liberated millions of pages of files. This is how obsessed many Germans remain concerning the crimes of the Stasi: As the Wall fell, Stasi staffers literally blew out shredding machines in destroying millions of pages of confidential documents—and dedicated teams of researchers, all these years later, continue to try to piece together documents from heaps of bags of shredded papers.

For most Americans, however, the day-to-day crimes of the Stasi came into focus only with the release of a 2006 movie. That movie, The Lives of Others, won the Academy Award for Best Foreign Language Film, among other international prizes, so it may surprise many Americans to learn that it suffered significant criticism in its home country.

The movie brilliantly depicts the insidious, sometimes fatal, harassment of freedom-minded East German citizens in the 1980s. At its heart: a veteran Stasi officer who finally experiences a crisis of conscience and attempts to protect a well-known playwright and his actress wife, after spying on them (even their lovemaking) from an attic perch for months.

The movie certainly doesn't pull any punches about the evils of the East German regime and the Stasi, but some Germans were outraged by the suggestion that Stasi officers were capable of moral actions. Anna Funder, author of the well-regarded account of her years in Germany titled Stasiland, captured criticisms of the movie in a 2007 article for the Guardian. She revealed that some of her old German friends had refused to see The Lives of Others, a film she considered a work of art but with a "fantasy narrative that could not have taken place (and never did) under the GDR dictatorship." Why? "No Stasi man ever tried to save his victims, because it was impossible. (We'd know if one had, because the files are so comprehensive.)" She cited the director of the former Stasi prison endorsing this view, partly because of "the internal surveillance of the Stasi making it physically impossible for a Stasi man to try to save people."

I found, however, in researching my book The Tunnels that these critics are quite wrong in claiming there were "no" such cases, not even one single attempt to "save people." On the contrary, there is a least one clear case, we now know thanks to recently released files.

The year was 1962. The Wall had just been erected in August 1961, met almost immediately by desperate attempts by East Germans to flee to the west, from swimming across canals to busting through the concrete in large trucks. Dozens drowned or were shot by guards, so in 1962 young men in the West started digging tunnels under the Wall to bring out friends, lovers, family members and strangers.

My book focuses on two tunnels that year, each partly funded by U.S. television networks. Under pressure from the Kennedy administration, CBS killed its coverage, by Daniel Schorr, of a tunnel that August. Then JFK and Secretary of State Dean Rusk tried to do the same when NBC completed a 90-minute primetime special on its tunnel. The network dropped the program from its schedule. A few weeks later, however, it dared to air the film, which would go on to win three of the top Emmy Awards.

The final major tunnel operation that year was set for mid-November. The cavern, on the rural outskirts of Berlin where the Wall was merely a series of fences and barbed wire, would be 230 feet in length, but barely two feet high, with no wooden supports. It was dug mainly by three of the most active tunnel builders, the brothers Boris and Edward Franzke, and Harry Seidel, one of East Germany's most-wanted men. Seidel was a former East German cycling champ who had leaped to the West in 1961, then led dozens to freedom over, under, and through the border barrier.

The tunnel was to break through after dark just outside a house at Wolfswerder, one block from the border where two dozen or more would-be refugees were to gather. But someone had tipped off the Stasi to the operation (there are several suspects, none confirmed), which would have made it a high priority for them even without the chance to capture, or kill if need be, Harry Seidel. The agency's longtime director, Erich Mielke, approved the plans, and the use of explosives to blow up the tunnel and, perhaps, its creators.

Explosives chief Lt. Richard Schmeing, 53, a Stasi veteran of more than a decade, took charge of the lethal preparations. On November 12, Schmeing’s team dug a hole between two houses across the street from the escape house, right at the border, directly over what they surmised was the path of the tunnel. They inserted two packs of explosives and covered them with autumn leaves. The explosives—2.5 kilograms of TNT, the same amount of RDX—were powerful enough to destroy many yards of property.

On November 14, Schmeing determined via listening devices that the diggers were moving equipment to the front of the tunnel, indicating an impending breakthrough. He adjusted the placement of the explosives and ran the copper wire 200 feet into the basement of the house, linking it to a 12-volt dry battery attached to the detonator he would likely, that night, finally activate to destroy the tunnel and everyone in it.

By 8 p.m. darkness had fallen. Schmeing stood at the basement windows facing West, watching and waiting, as his Stasi comrades flashed one of the all-safe signals to the tunnelers.

As was his wont, Harry Seidel, armed with a pistol, took charge. When someone opened the door, Harry saw not an anxious escapee but a squad of heavily-armed Stasi in civilian clothes and soldiers in uniforms. Faced with machine guns, Harry dropped the pistol. He was shoved to the floor, kicked, and pummeled. Stasi agents frog-marched him out to the tunnel exit and stood a few feet behind him in the dark, weapons aimed at the jagged hole in the ground.

Seidel, hearing a stir inside the tunnel, suddenly shouted, “Go away! The tunnel is betrayed, soldiers will shoot you!” The Franzkes took the hint, and immediately began a mad scramble to the West.

Inside the laundry room in the basement it was time to blow up the tunnel. The Stasi commander on the scene, Lt. Col. Siegfried Leibholz, ordered Schmeing: Sprengen! “Ignite!” There was just one problem: Two teenagers from the neighborhood were talking and maybe kissing in the dark no more than a dozen yards from where the powerful explosives had been planted. It didn’t look like they were in any hurry to go home.

Schmeing, his back to Leibholz, hesitated. The explosives expert had survived two Nazi death camps, and was slated to be part of a deadly typhus experiment at Buchenwald when the war ended. He may have had more moral qualms than many knew. Finally he pressed the detonator.

Nothing happened. He tried again—same result. This produced much consternation in the basement. Schmeing, defying an order from a superior, went out to investigate why his bomb charge had fizzled. He picked the copper wire off the ground and followed its path across the yard—until he came to where, he later reported, it had been crudely cut, perhaps with a knife or piece of glass, and pulled apart. Someone on the Stasi team had apparently engaged in an act of humanitarian sabotage.

Despite the arrest of more than two dozen, including Seidel, the bust had not been widely celebrated by the East German media (a rarity in these cases) due to the spectacular act of sabotage at its climax. The Stasi probed, but did not quickly solve, the mystery of the tampered explosives. Investigators interviewed or demanded written reports from all of the Stasi operatives in the basement of the escape house, and the Stasi guards and soldiers on the perimeter of the property. No one confessed to sabotage, pointed a finger at a suspect, or provided fresh evidence—a rarity in Stasi probes.

Experts had determined that the explosives’ wire had been cut by a dull knife or piece of glass, then violently yanked apart, far out in the garden area of the site. It had to be deliberate, but they could not piece together who might have visited that area between the placing of the wire and the failed detonation a few hours later.

Lt. Schmeing, the Nazi death camp survivor who had set the wire and then, when it didn’t work, inspected a dark corner of the property, was a suspect, but investigators could find nothing to pin on him. The Stasi never did find out for certain who sabotaged the detonation of the tunnel at Wolfswerder the night Harry Seidel was arrested. In his recent book Wege durch die Mauer, former escape helper Burkhart Veigel makes a persuasive case for the explosives expert, Schmeing, himself. Veigel’s analysis of the Stasi’s official probe concludes that Schmeing fiddled with the detonator to prevent the explosion, then went outside (alone) and cut the cable himself—to throw off any investigation.

In any event, those claiming that a documented case of a single Stasi operative acting morally to save lives does not—indeed, could not—exist are clearly wrong. Still, my own scanning of thousands of pages of Stasi documents uncovers no other example. One of the leading characters in my book, in fact, is Siegfried Uhse, a young Stasi informer whose actions led to the arrest of dozens and the shooting or one of more tunnelers. There is no record that he ever expressed any regrets.