The Missing Piece in the Democrats’ Plan to Victory

Ed Simon is the associate editor of The Marginalia Review of Books, a channel of The Los Angeles Review of Books. He holds a PhD in English from Lehigh University, and is a regular contributor at several different site. He can be followed at his website, or on Twitter @WithEdSimon. 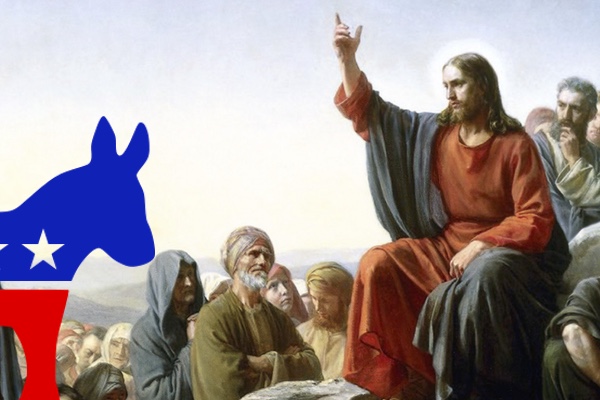 A German intellectual once wrote that “All property should be held in common’ and should be distributed to each according to his needs, as the occasion required.” This wasn’t first said by the German intellectual you might expect, but rather was written four centuries before Karl Marx. They were the sentiments of Thomas Müntzer, a fiery preacher embroiled in the Peasant’s War of 1525, the largest mass working class uprising in Europe until the French Revolution. By the end of the rebellion some 100,000 Germans were dead, and Müntzer executed.

This October saw commemorations of the 500th anniversary of Martin Luther’s 95 Theses, with the supposed nailing of that document to the cathedral door in Wittenberg popularly understood as having initiated the Protestant Reformation. Most people are less aware of all of the disparate implications of Luther’s act, chief in those early years (and to Luther’s horror) being the rebellion of German peasants. Müntzer’s activism took place in the context of a Europe wracked by divisions, and new nationalisms, with rapidly altering social, cultural, and economic concerns: a world not so different from our own.

Much as all that which was solid melted into air during Müntzer’s day, so too has our own conventional wisdom been upended. This is most visibly and troublingly seen on the right, but the electoral successes of a Bernie Sanders or Jeremy Corbyn demonstrate a similar realm of imaginative possibility on the left. In popular discussion, where a stark distinction between left and right is often assumed, religion is seen as the provenance of the right. But the increasing visibility of various forms of left-wing religion not only proves that assertion to be spurious, it also demonstrates that theology never really left progressive politics. The contemporary British philosopher John Gray claims that “Modern politics is a chapter in the history of religion.” Any consideration of our politics in this moment which doesn’t address religion will be lacking.

Müntzer’s theology, firmly grounded in his reading of scripture, seems uncannily “left-wing.” His movement advocated for common ownership of land, abolition of the class system, and redistribution of wealth. Similarities between left wing thought and past theologies aren’t superficial – there is a direct historical connection between them, as argued by historians like Norman Cohn and Christopher Hill. While not wanting to misread the past, one can note that though Müntzer couldn’t have held the materialist economic diagnosis of the left, he did certainly share much in terms of practical prescription. Müntzer’s ideology was not in spite of his Christianity, but directly because of it – if not identical for him.

Nor is he an anomaly within Christianity. There were precedents in the English Wycliffites of the fourteenth century who initiated their own peasant’s rebellion, as well as the numerous Catholic reform movements of the Middle Ages such as the Franciscans, or the dissenters and non-conformists of the seventeenth and eighteenth century, and the progressive Christian reformers of the nineteenth century who were involved in radical movements from utopian intentional communities to abolitionism.

All of these groups are varied, and it’s important not to collapse them into the comforting binaries of contemporary politics. Still, in our current moment, as we consider all of the ways in which class, gender, and race impact ideology, it’s important not to forget the role of religion as well – and not just on the right. As Müntzer himself would have argued, Christian political radicalism is based in a reading of scripture. One imagines that if he had the opportunity to parse the baroque and secret intricacies of the Affordable Health Care Act (Obamacare), he wouldn’t see much of the Sermon on the Mount reflected. And one imagines that his rhetoric would be sharper than to just critique that nihilistic legislation as “bad.”

Indeed many of the progressive faithful are finding a more pointed rhetoric. A June 11th cover piece in the New York Times by Laurie Goodstein featured members of the loose coalition that has been dubbed the “Christian left.” Liberal Protestants, Catholics, and Jews were centrally involved in the progressive struggles of two generations ago, from anti-Vietnam war resistance to civil rights. Relatively recently the word “Christianity” has acquired a conservative gloss to many in the wider secular culture. Yet as Goodstein explains, “left-leaning faith leaders are hungry to break the right’s grip on setting the nation’s moral agenda.”

Those leaders certainly have ample historical precedent in justifying the combination of left politics and religion, even if some more contemporary liberals aren’t as familiar with the vocabulary of faith. In a June 22nd piece in the New York Times, scholar Daniel K. Williams explicated on the Democratic party’s “religion problem,” arguing that younger Democrats are “are not able to speak the language of a communally based faith because it does not inform or shape their political views” which in his view has led to electoral defeat.

Müntzer was much more radical than the business friendly Democratic party. Yet for any one on the left, a consideration of figures like Müntzer and other Christian radicals may provide a guide for how progressives, both religious and secular, can think of themselves. Religious rhetoric is among the most potent vocabularies in the human experience. Whether wed to conventional religious belief or not, scriptural and theological language gives us a tongue to discuss injustice, inequality, and inequity – and to condemn them in no uncertain terms. The wonkish terminology of secular liberalism doesn’t hold the imagination of people in the same manner.

If progressives are to ever discover a strategy out of the wilderness of political defeat it will have to be, in part, written in the language of faith. Furthermore, this can be done while respecting the integrity of secularism, for one must also acknowledge the “religious” roots of that particular worldview. Modern secular politics is a continuation of religion by other means. That’s true whether we’re individually “religious” or not. Forgetting that score is to trade one’s birthright for a mess of pottage.