Will Trump’s Election One Year Ago Prove to Be a Turning Point for Women’s Equality?

Katrin Schultheiss is an Associate Professor of History at George Washington University. 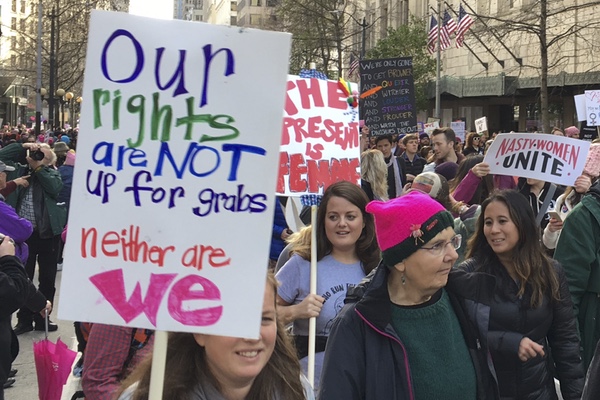 Women have tended to make the greatest strides toward political, social, and economic equality during times of turmoil and unrest. Is the era of Trump such a moment?

We’ve all seen the numbers:  millions of women around the world protesting in the aftermath of the inauguration of Donald Trump; thousands organizing political action groups around issues and candidates; and hundreds running for office. Across the country, unprecedented numbers of women are entering political races, vying for election to everything from local school boards to the governor’s mansion to Congress.  Is this the beginning of a profound gender transformation of the political sphere? Or is this a temporary shake-up, a short-lived challenge to the regular, masculine domination of the public arena?  History offers some cautionary lessons, but also some reasons to hope that real change is possible.

The most sweeping histories of women’s access to power  – social, economic, and political – in Western civilization invariably offer tales of centuries of male dominance more or less unmitigated until the late eighteenth century. Women have, of course, had some access to circumscribed forms of power and authority – female mystics had considerable influence in medieval Europe; women contributed to the economy in the pre-industrial as well as industrial period; and women’s role within the family has in many religious and cultural traditions been recognized, at times even venerated.  Yet female authority has historically always been situated within a broader story of male control over the major institutions that shape society: government, the marketplace, and organized religion.

Significant change, when it occurred, has until relatively recently happened not gradually, but in sudden leaps. These were the moments when the status quo was shaken and women were suddenly able to claim a good deal more power than they had even a decade earlier.  Historically, such moments have taken place during times of upheaval, when the major institutional structures were shaken or upended by larger forces such as revolution, war, or other political crisis.  When cracks began to appear in these structures, women often benefitted.  Not all women, to be sure, but more than just the handful of notables like Cleopatra, Joan of Arc, or Queen Elizabeth, whose power is understood as an aberration rather than an example of women’s role in society.

Nothing shakes the foundations of institutional authority more violently than revolution. While the most famous female voice from the American Revolution is undoubtedly Abigail Adams, who demanded that her husband, John, “remember the Ladies,” less widely noted is that white women during the Revolution also made unprecedented claims to property and economic authority in the absence of their husbands. And even less known is the fact that for a brief period of time, in the aftermath of the war, white women in New Jersey were granted the right to vote.

The American Revolution was hardly unique in opening spaces for women to enter the political sphere.  During the most radical phase of the French Revolution, women seized upon the institutional chaos that followed the downfall of the monarchy to open their own political clubs through which they demanded rights and the political authority to have their voices heard in the new republic. But as soon as Jacobin rule was firmly established, those clubs were shut down and women were explicitly deemed to be “passive” rather than “active” citizens.

Half a century later, the revolutionary wave of 1848 threatened or, in some countries, swept away autocratic monarchies across Europe. Once again, women seized the moment of institutional uncertainty to make new demands for political power.  Women’s rights groups were established in several cities; women edited new political newspapers expressly aimed at an expanding female readership; and a few women threw their hats into the ring for political office.

Although the 1848 revolutionary wave did not reach the United States, American women nonetheless seized the democratic moment to demand equal rights (including the vote) at Seneca Falls.  Significantly, it was the burgeoning abolitionist movement – itself a potentially radical destabilizer of the social and political order – that had provided women with the opportunity to take on leadership roles and had led directly to the organizing of the Seneca Falls Convention.  Yet while that event is commonly said to mark the beginning of the American women’s rights movement and the suffrage movement in particular, it would take more than seventy years before the Nineteenth Amendment was passed.

In the United States, World War II is probably the most oft-cited example of a moment when social turmoil opened significant opportunities for women. Every school child learns of the thousands of Rosie the Riveters who took skilled, well paid jobs in the defense industry, jobs that were reclaimed for men when they returned from military service. Here again the re-establishment of conventionally gendered economic and social roles after the war signaled the return of the old order. In the decades that followed, women would enter the workforce in ever greater numbers but the jobs in heavy industry that had temporarily opened up to them remained largely the province of men.

The 1960s and early 1970s were arguably the most recent period of social and political upheaval to threaten men’s domination of the institutions of power. Unlike during the earlier periods of destabilization, women in the ‘60s and ‘70s played a significant role in creating – rather than just taking advantage of -- the conditions of instability. Together with activists in the Civil Rights Movement, the Gay and Lesbian Rights Movement, and the anti-Vietnam War movement (groups with which they significantly overlapped) feminists overturned institutionalized norms of employment, education, marriage, sexuality, and even, to a degree, organized religion.  In so doing, they helped further destabilize the institutions whose continuing weakness allowed the new norms to take hold.  It is no accident of history that when the political backlash of the 1980s (inevitably) arrived, the significant changes of the 1960s and 70s were not shut down, rolled back, or overturned.

Is the current moment of women’s political activism likely to suffer the fate of the women of the revolutions (American, French, and, for that matter, Russian) who took advantage of cracks in the edifices of power only to see them plastered over a few years later?  Or will it, instead, follow the more sanguine example of the feminist movement of the’60s and ’70s, when women themselves wielded the hammers that produced enough cracks that some of these edifices actually fell?  The flood of women currently running for (and winning) political office; the ongoing organizing efforts of groups like the Women’s March; and the recent high-profile exposure and condemnation of sexual harassment and assault in the workplace, are all grounds for optimism. But history cautions us that the openings (like those trumpeted in the Washington Post below) afforded by a period of political uncertainty can close quickly unless those openings are transformed into occasions for fundamental change.