David L. O'Connor received his Ph.D. in history in 2000 from Stony Brook University, and is a history teacher at Paul D. Schreiber High School in Port Washington, NY. 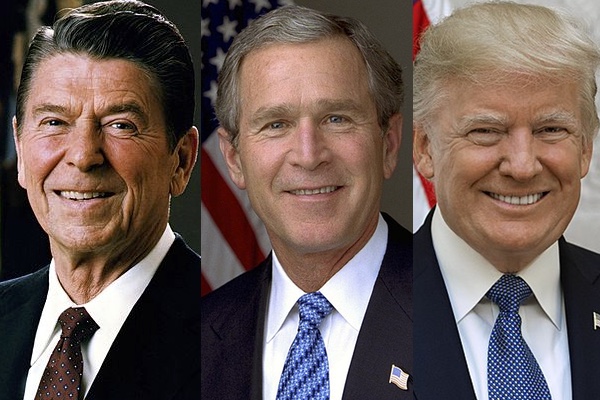 “The fabled revenue feedback of the Laffer curve had thus slid into the grave of fiscal mythology fort days after the supply-side banner had been hoisted up at the GOP convention.”— David Stockman, The Triumph of Politics

On August 13, 1981, President Ronald Reagan signed into law the Economic Recovery Tax Act at Rancho del Cielo, ushering in one of the most ambitious changes to fiscal policy in the post-war era. The law made numerous changes to American tax policy, including a decline in corporate taxes, cuts to the estate tax, a reduction of the lowest tax bracket from 14% to 11%, and a steep decline in the top marginal tax rate from 70% to 50%. Concerns about reductions in federal tax receipts were dismissed in the belief that these changes would unshackle the American economy and generate so much growth that the tax cuts would simply pay for themselves, as predicted in the so-called Laffer Curve, named after economist Arthur Laffer. Since the Tax Cut and Jobs Act (TCJA), signed into law on December 22, 2017 by President Donald Trump, is predicated on the same contention that tax relief will lead to the expansion of tax receipts, it is important to examine the historical record to assess the potential impact of tax cuts on fiscal policy.

Defenders of the TCJA correctly point out that federal tax revenue increased in the 1980s. In the August 3, 2017 edition of the Wall Street Journal, former U.S. Senator Phil Gramm (R—TX) and Michael Solon of U.S. Policy Metrics, boasted about the effects of the Reagan tax cuts. “Reagan Cut Taxes, Revenue Soared” reads the headline of their op-ed piece. In 1981, federal tax receipts totaled $599 billioni and by 1988 the total was $909 billion, a seemingly impressive increase of 52%. This is a fact, however, that can be used to obscure the truth, for federal tax revenues have increased every year for the last seventy years, save 1959, 1971, 1983, 2001, 2002, 2003, and 2009. So the issue should not be whether or not a specific tax rate increases revenue; instead policymakers need to consider how tax policies influence the rate at which revenue grows. For example, during what Gramm and Solon call the “economic malaise” years of Jimmy Carter’s presidency, tax receipts increased from $355 billion in 1977 to $517 billion in 1980, a 46% increase, which is significantly higher than even the best four consecutive years in the Reagan era. (Federal revenue went from $734 billion in 1985 to $909 billion in 1988, an increase of 24%.) An examination of tax receipts can also take into account the year after a president leaves office because the budget for the fiscal year is established before a president takes office. Even then, however, the growth under Reagan from 1985 to 1989 was 35%, far below the 69% growth under Carter when 1981 is included. If we control for the high inflation in the late 1970s, tax receipts in the 80s still fell short of the trends in the years of Carter’s administration.

As the Revenue Reconciliation Act of 1993, promoted by President Bill Clinton, was being debated in Washington, opponents of the bill raised the specter of the possible catastrophic consequences of the tax increases under consideration in the bill. On May 27, 1993, Representative Christopher Cox (R—CA) asserted: “This is really the Dr. Kevorkian plan for our economy. It will kill jobs, kill businesses, and yes, kill even the higher tax revenues that these suicidal tax increasers hope to gain.” Fortunately, this doomsday scenario did not come to fruition. Clinton’s raising of the top marginal tax rate from 31% to 39.6%, and the increase in the corporate rate to 35% did not “kill” tax revenues at all. Tax receipts went from $1.2 trillion in 1993 to $2 trillion dollars in 2000, an increase of 67%, which played a significant role in the creation of federal budget surpluses from 1998 to 2001, the first surpluses since 1969. This surge in tax receipts was reversed during the presidency of George W. Bush; tax receipts totaled $2 trillion in 2001 and $2.5 trillion in 2008, a rise of only 20%. The declining revenues contributed to the change from the $128 billion surplus Bush inherited from Clinton into the projected $1.2 trillion deficit bequeathed to President Barack Obama. (According to Politifact: “On Jan. 7, 2009, two weeks before Obama took office, the Congressional Budget Office reported that the deficit for fiscal year 2009 was projected to be $1.2 trillion.”)

To be sure, budget deficits are produced by tax receipts and outlays. It would be wrong to assert that the deficits of the Reagan and Bush eras were simply a function of tax cuts, and the surpluses of the Clinton era only the result of his tax increases. Ronald Reagan and George W. Bush’s presidencies oversaw declining rates of tax receipts and the steepest increases in federal spending since President Lyndon Johnson launched the Great Society programs. What the historical record shows, however, is that tax cuts have not paid for themselves as promised in the past, and that the Tax Relief and Jobs Act that will go into effect in 2018 may lead to shortfalls in tax revenue projections and a return to the trillion dollar deficits of recent years. This is even more likely when you consider that President Trump has promised to “build a wall,” leave Social Security and Medicare alone, increase spending on infrastructure, and sharply increase defense spending. If history is any guide, tax revenues will increase, but the nagging question remains: “By how much?” Low taxes and high spending have not managed to produce surpluses in the past, and it takes some magical thinking to assume it will happen now. It seems we have returned to an era of free-lunch conservatism.