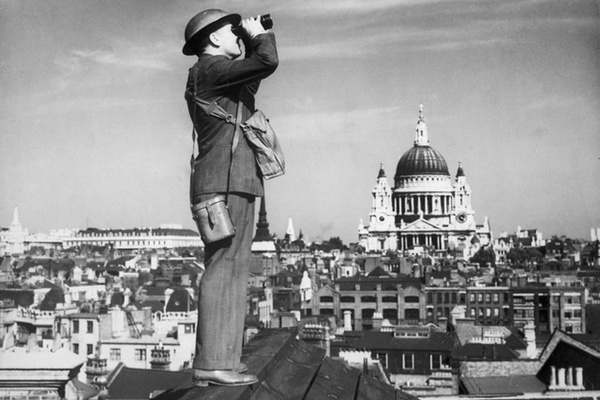 The recent motion picture, The Darkest Hour, the World War II story of British Prime Minister Winston Churchill and the Battle of Britain, has raised the question, Were American pilots in this historic battle?

Indeed there were, The number most often cited is “nine,” but the number is elusive as some volunteers declared themselves to be Canadian: Yankee participation would have violated American law.

In those dark days in the spring of 1940, following the defeat of France and the British forced evacuation at Dunkirk, some British leaders led by the aristocrat Lord Halifax, proposed reaching an accommodation with Hitler. Winston Churchill, supported by the British “lower classes,” declared, “We shall never surrender.” The American pilots who volunteered for service with the Royal Air Force (RAF) placed their lives on the side of Churchill.

The first American pilot known to have flown—and died—with the RAF in the Battle of Britain, according to Alex Kershaw in The Few: The American “Knights of the Air” Who Risked Everything to Fight in the Battle of Britain, was William Mead “Billy” Fiske III. Born in 1911, the scion of a wealthy Connecticut family, he apparently spent more time in Europe than in the U.S. At the age of 16 he won a place on the U.S. Olympic team and became the youngest male to win a gold medal as the captain of the American bobsled team in the 1928 competition.. A second gold medal was achieved at the Lake Placid Winter Games in 1932, but Fiske declined to participate in 1936 as that might mean being honored by Germany's leader Adolf Hitler

When not pursuing Olympic gold medals, Billy Fiske found time to earn a degree in economics and history at Cambridge University, spend some time in Hollywood where he produced a movie and learned to fly; and, later, to court and marry Rose Bingham, the ex- wife of the Earl of Warwick.

With a passion for flying as well as sports, Billy Fiske sought membership in RAF Reserve Fighter Squadron 601. Its pilots were “predominantly wealthy young Londoners” and it became known as the “millionaires squadron.” To the ire of RAF leaders, the pilots distinguished themselves by wearing a brightly patterned silk scarf and leaving the top button of the tunic opened. (It was even rumored that their tunics were lined in red silk.)

First denied membership as “not in the interests of Britain,” that obstacle was overcome by Fiske recreating himself as a Canadian (fooling few due to his Olympic gold medals) and he was formally admitted into the RAF on September 18, 1939, eighteen days into the Second World War.

Short on solo hours, Fiske was first assigned to a pilot training unit and it wasn't until April 12, 1940 that he was awarded pilot's wings. (Fiske distinguished himself from other pilots by arriving in a super-charged Bentley faster than any other motorcar.)

RAF Reserve Squadron 601 was equipped with Hurricanes, a British fighter often in the shadow of the more popular Spitfire. In fact, the Hurricane was quite capable of taking on the excellent Luftwaffe fighter the Messerschnitt-109 (Me-109). Pilots favored the Hurricane's wide landing gear and the immense firepower from eight wing-installed Colt-Browning machine guns. RAF leaders praised the Hurricane because it was much easier –and cheaper—to produce. As a result more squadrons were equipped with Hurricanes than Spitfires.

Considering the merits of the two fighters, RAF Fighter Command assigned Spitfire squadrons to take on the Me 109s while the Hurricanes went after the Luftwaffe's' Me-110 heavy fighters, the Stuka dive bombers and twin-engined bombers. It was this strategy that deprived the Luftwaffe of achieving control of the air thus ending Hitler's planned invasion of England.

For a time the 601 squadron rarely encountered enemy aircraft, a situation that troubled Billy Fiske. Finally, as the battle became intense on August 15, 1940, Pilot Officer Fiske began engaging the enemy. No victories achieved but on August 16, while battling Stukas, his fuel tank was hit and a fire ignited. Rather than bailing-out, Fiske chose to crash land near his airfield in an attempt to salvage the aircraft. Fiske was pulled from the aircraft by a fellow pilot. The fire had gone out but Fiske was badly burned though conscious. An ambulance rushed him to a hospital and, following emergency treatment, “began to make a remarkable recovery.” When 601 Squadron's adjutant visited the hospital later that afternoon he found Fiske “sitting up in bed, perky as hell.” The physicians concluded: “He will survive.” He did not; in the night he went into shock and died.

Nine—even twice that-number—of American volunteer fighter pilots had no impact on the balance of power between the opposing forces. But the symbolism of American lives at risk to defend the freedom of the English could hardly have been lost on the English appeasers led by Lord Halifax and his followers.

William Meade Fiske III was given a hero's funeral, not due to heroic action in combat but because he had come to the aid of Britain in its darkest hour. In the Boxgrove graveyard in Sussex, England his headstone reads:

AN AMERICAN CITIZEN WHO DIED THAT ENGLAND MIGHT LIVE.