The last American "trade war" didn't work out so great 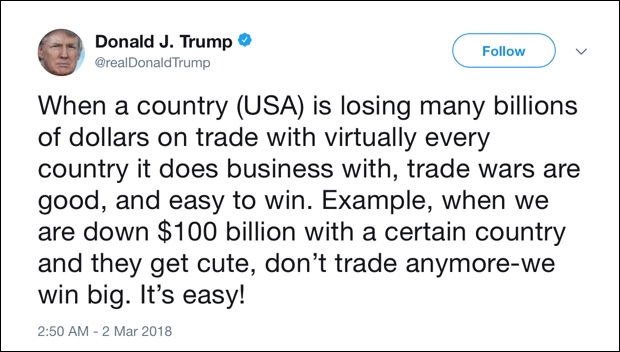 What's the theory behind Trump's case? And what's the history of starting just these sort of "trade wars" (in Trump's words)? I reached out to Patrick Gillespie, an economics reporter for CNNMoney, to get some answers.

Our conversation, conducted via email and lightly edited for context, is below.

Cillizza: Let's start with Trump's tweet this morning that "trade wars are good, and easy to win." How much basis in fact is there for that claim?

Gillespie: America's last trade war exacerbated the Great Depression in the 1930s, when unemployment rose to 25%. Claiming it was protecting American jobs, Congress passed the Smoot-Hawley Act in 1930. The original bill was meant to protect farmers. But to build political support, many lawmakers asked for tariffs -- or taxes -- on all sorts of goods in exchange for their vote.

Several nations, such as Canada, slapped steep tariffs -- or taxes -- on US goods shipped and sold abroad. For example, US exports of eggs to Canada fell to 7,900 in 1932 from 919,000 in 1929, according to Doug Irwin, a Dartmouth professor and former trade adviser to President Reagan.

The result: US imports fell 40% in the two years after Smoot-Hawley. Banks shuttered. Unemployment shot up. Surely, there were a litany of factors at play. But economists widely agree Smoot-Hawley made the Great Depression much worse than otherwise.