How We Got Trump 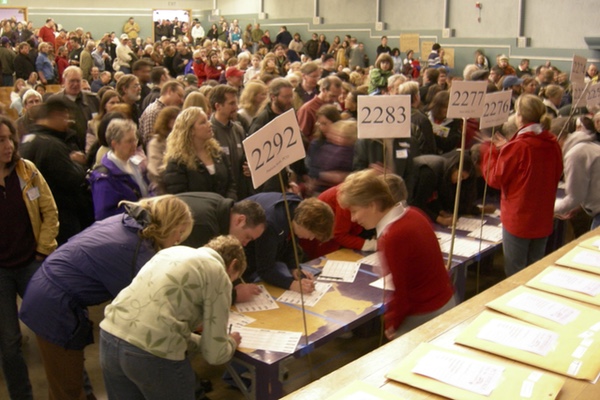 Voters checking in at a 2008 Washington State Democratic caucus held at the Nathan Eckstein Middle School in Seattle - By Joe Mabel, CC BY-SA 3.0

America and its political world has been rocked. A bombastic, businessman, reality television actor with unstable, unsavory characteristics is president. Many Americans whether Republican, Democrat, or independent find it unbelievable. Journalists and pundits have tripped over their tongues or fumbled with their computer keyboards trying to explain what happened. To understand the Trump nomination, we must realize that it did not come out of the blue. Its seeds were planted and nurtured.

It began with the process by which both parties choose their nominees. Until the 1970s, the party bosses or activists became or at least hand-picked the delegates to the national conventions. These party leaders chose largely mainstream candidates devoted to their party and in most cases they chose candidates who had proven their acumen or respectability usually in politics or in some cases, the military. These were presidential candidates who could go into a general election and appeal to a broad segment of the American people geographically and economically. Parties such as the Socialists or Dixiecrats never had a chance as they were too far from the mainstream to compete in a general election. A minority of states held primaries or caucuses, but they were irrelevant to the process of picking presidential nominees. For example in 1920 Warren Harding entered a few primaries and did not do well, but that made no difference to the party GOP bosses who would nominate him for president

Then came a sea-change for the Democrats in 1972 and the Republicans in 1976 with primaries and caucuses determining the convention delegates bypassing the party leaders. This generated an unintended consequence.

Presidential primaries and caucuses have attracted notoriously low voter participation allowing the extremist party base to dominate the process. James Madison, Father of the U.S. Constitution, warned that small scale democracy can lead to extremism or even demagoguery. This is exactly what happened. Although Trump and other Republicans boasted of an increased voter turnout in their 2016 primaries, the GOP primaries and caucuses attracted a mere 17 percent of the eligible voters. The activists including the Christian right and those blaming immigrants for their tenuous economic status voted in great numbers.

One more factor was needed for Trump to succeed. A change in American culture served that purpose. The change has been a coarsening or “meanness” and extremism asserting itself into our lives. Curse words and crude insults are now heard in once polite society.

This harsh trend infiltrated politics. This political coarsening and meanness spawned the rise of talk radio which can better be termed “hate radio.” Through this forum, millions listen to ugly insults on a daily basis. Fox News, often the highest rated cable news network, replaced for millions of Americans the mainstream CBS News with Walter Cronkite or NBC News with Huntley and Brinkley. Unsubstantiated accusations are treated as facts. Crude remarks about a person’s physical appearance are considered clever humor. Compromise and working together to achieve solutions to problems have become heresies to many Republicans and anathema to the religious right. Not as many people are offended by a candidate who resorts to name-calling, uncouth language, and vitriol.

Along came Trump at this opportune time for a political career. He originally became a national political figure by making an appeal to racism by questioning President Barack Obama’s birthplace. In another era, that alone would have disqualified Trump from the presidency. But in 2016, party bosses were in no position to stop him. Trump went on to call Mexican immigrants rapists and murderers when announcing his candidacy.

Furthermore, with the coarsening of American society, Trump was not stopped by the voters either. When announcing his candidacy, Trump called Mexican immigrants “rapists and murderers.” Do his supporters know that the incident of violent crimes among undocumented residents is much lower than that of the general population? From the mouth of Trump we would go on to hear such name-calling as “Low-Energy Jeb,” “Lying Ted,” “Crooked Hillary,” and most recently, “Low IQ Maxine” (Rep Maxine Waters of California). In another era, that rhetoric too would have disqualified Trump.

Also in the campaign we heard about an unrealistic wall between the U.S. and Mexico to be absurdly paid for by Mexico. We heard about a total ban on Islamic immigration, which is clearly unconstitutional and religiously bigoted. In another era, those two ideas would have meant disqualification.

It is clear that Trump took advantage of a political system that enabled him to win the presidential nomination of one of our great political parties. In the general election, he won the votes of enough people fearful of the present and future. To enough voters, the new diverse America with its economic changes was no longer a great county. In this era in which vitriol is commonplace, a crude candidate with bromides tinged with racism and the backing of one of the major parties can garner enough votes to win (with an assist from the Electoral College).

We don’t know the future. But it is safe to predict that the method of choosing presidential nominees will not revert to the party bosses being dominant again. American history does not flow in an undemocratic direction. However, there is hope that the unethical, immoral, scandalous Trump era will generate a revulsion among enough Americans to augur change. During the Monica Lewinsky scandal, columnist George Will predicted that the American people will want to take a shower by the time of the election of 2000. In other words, clean off from the Clinton era. That prediction was not wholly accurate as Clinton’s vice-president won the popular vote. Yet, it is likely that the American people will want to clean off from the Trump era. Even in the Republican Party, there is a growing number who want that.