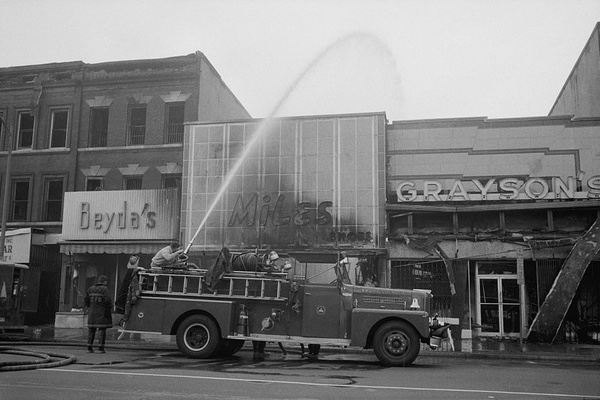 Even though I was only eight years old at the time, a moment fifty years ago in a neighborhood park in Washington, DC continues to speak to me.

I lived with my parents in the suburbs of Maryland, but we were often in DC because my dad owned and operated an automotive repair shop in the northeast part of town. The garage was sometimes boring, so after school I would walk to Loomis Park where I, a white boy, was often the only person who was not African American.

I still remember the toothpick in his mouth, how it moved about as he predicted the burning of the nation’s capital. His warning stunned and frightened me. He may as well have said an asteroid was about to impact our planet and end civilization forever.  I probably was whimpering when I asked, “Why?”

In answer to my question, the teen sat down with me at a picnic table, lit a cigarette, and while slowly smoking proceeded to tell about King and what he meant to African American people.

The teen offered calm but frank instruction. He explained that blacks were saddened and ticked off about King being gunned down. King preached nonviolence, but what did it get him? So this is why Washington was going to burn.

More than anything what I remember was the sentiment, the sentiment of hurt and disappointment. I could feel his feelings. Though I was white, I found myself in agreement.  Though I was confused and not in favor of the predicted torching, I got it. Outrage is a logical reaction to the gunning down of a people’s hero.

Prior to that I had vaguely heard of King, but the adults I regularly interacted with (mostly white) seldom spoke of him. Thanks to the teen in the park, King emerged in my mind as someone important.

To this day I am amazed by the gentle patience the teen showed me while expressing indignation over the murder. In response to my question, he could have roughed me up and called me a stupid white boy. Instead, he acted like a big brother, taking time to explain to one who otherwise had no way of knowing.

Washington did indeed burn. My parents’ business was spared, but that was just random chance. Some white businesses prepared by having “Soul Brother” painted on the outside of their shops. The idea was that arsonists would spare black businesses, so the thing to do was pretend to be non-white.

The car body shop down the street, owned by a white family, had the “Soul Brother” designator. My dad did not mark his shop. I will go the rest of my life wondering if his refusal to do so was honesty alone.

On Christmas of that same year, one of the gifts I unwrapped was a set of checkers. My mother had purchased the game set at a drug store that had been burned during the riots. It was part of the damaged merchandise that was afterwards sold at reduced price. The checker board had some brown scorched markings and a few of the plastic game pieces were slightly melted.

That checker set is no longer part of my possessions. And the DC riots are barely remembered. But that moment in the park remains for me a living history. How I wish the spontaneity and civility of that chance encounter would be repeated across our nation today as we continue to grapple with the problem of race.