What we didn’t know about Trump on Election Day 2016 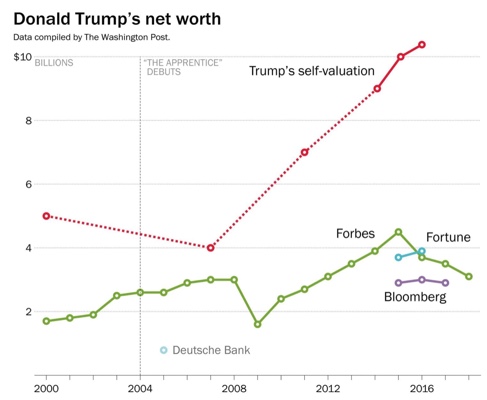 For decades, Trump has presented his own net worth as substantially larger than it actually is. Last month, The Post reported on an incident in 1984 in which Trump, posing as his own publicist, called Forbes and made the case for being much wealthier than the magazine calculated. This subterfuge continued, in various guises, for years. Even when he announced his candidacy for the presidency in 2015, Trump claimed to be worth more than $10 billion — up to three times the estimates of his worth from independent analysis.

Why is this important? In part because it was Trump’s only credential. He pitched himself as a dealmaking, problem-solving business expert, but the numbers presented for his net worth (and the failure to release income data from his tax returns) meant that we had no way of evaluating whether he was actually much good at business. Sure, various buildings have his name on them, but it’s not clear what that means in terms of his business acumen — even granting that business acumen is transferrable to governance.