The Notre Dame and Harvard of the Christian World?

Adam Laats is Professor of Education and History (by courtesy) at Binghamton University (SUNY). He is the author, most recently, of Fundamentalist U: Keeping the Faith in American Higher Education (Oxford University Press, 2018). He blogs about education, history, and religion at I Love You but You’re Going to Hell. 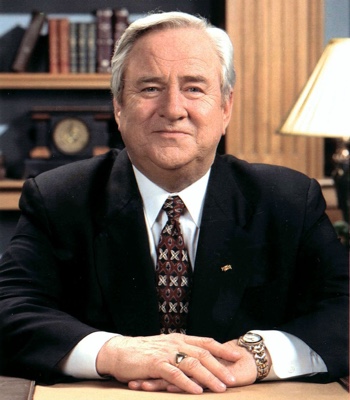 The story is bigger than the Jerry Falwells and older than the Moral Majority. As I found in the research for my recent book about the history of evangelical higher education, the smashing recent successes of the Falwells’ Liberty University are fulfilling dreams that go back a century; dreams that have been shared by generations of conservative evangelical college leaders. 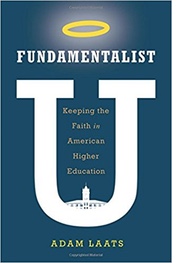 Back in 1971, when Jerry Falwell Sr. opened Lynchburg Baptist College, he had big ambitions for his little school. As one leader put it, their college wanted to be “the Notre Dame of the Christian world athletically and the Harvard of the Christian world academically.” In the 70s, such dreams seemed preposterous. At the time, Liberty students often didn’t have classrooms to meet in and, as one alumni reminisced, “would meet . . . at the old trash dump road above the present campus.”

In terms of public exposure and notoriety, Jerry Falwell Jr. seems close to achieving his father’s dreams for Liberty University. For those who know the history of conservative evangelical higher education, however, it is apparent that those dreams have a much longer history. The network of evangelical colleges, seminaries, institutes, and universities that came together as part of the fundamentalist movement of the 1920s has always wanted to be more than just a conservative religious refuge. Since the 1920s, leaders of evangelical universities have always yearned to reclaim their role as the intellectual and moral leaders of the United States.

Beginning in the late 1800s, conservative evangelical intellectuals and academics fretted about the changes that were sweeping American higher education. Too many schools, they felt—even evangelical Protestant schools—had adopted new, secular attitudes toward science, knowledge, and research. Too many colleges abandoned their traditional goal of guiding students toward evangelical beliefs.

By the 1920s, some of those conservatives joined together in what they called the fundamentalist movement. As part of their mission, they vowed to save higher education. As one evangelical college administrator explained in the pages of the Moody Bible Institute Monthly in 1923, fundamentalists needed a new kind of higher education. They did not want to retreat to self-centered church colleges, but rather create a superior network of religious schools—colleges that would, in his words, “ignore the whole worldly system, and organize courses independent of the world’s stereotyped curricula, engage the strongest conservative scholarship in America, raise the educational standard above the present unchristian philosophy, stablish [sic] it upon ‘the faith once for all delivered to the saints,’ and then challenge the world to meet the new scholarship.”

Several of his fellow conservative evangelical administrators agreed. Charles Blanchard at Wheaton College in Illinois pulled his college into the fundamentalist family. A few other institutions did likewise, such as the Moody Bible Institute in Chicago and Gordon College near Boston. Some fundamentalist leaders in the 1920s opened new colleges to fulfill the fundamentalist vision, including Bob Jones College in Florida (now Bob Jones University in South Carolina) and Bryan University (now Bryan College) in Tennessee.

The fledgling fundamentalist institutions made two paradoxical promises. On one hand, they promised to provide an intellectual and spiritual shelter for fundamentalist youth in secularizing times. On the other, they always insisted they would do more than protect students—they would reclaim their proper role as the best universities in America. They would establish their vision of conservative evangelical higher education as the premier type of higher education in the United States.

As school founder Bob Jones Sr. insisted in 1929, his new school would meet and exceed every academic standard of non-fundamentalist schools. He promised parents, “Your son and daughter can get in the Bob Jones College everything that they can get in any school of Liberal Arts.” Yes, students’ fundamentalist faith would be shielded and nurtured. But they would also get a premier academic experience. The goal was not merely seclusion; it was to provide a superior college education in every way. “It is our plan,” Jones explained, “to train and educate strong, outstanding Christian leaders. This is what America needs—lawyers, doctors, business men, teachers, preachers, all strong leaders.”

What could be done? Dean Armerding proposed raising a staggering sixty-five million dollars to create a multi-campus evangelical university. The scheme would combine existing evangelical colleges, all of which would offer two years of fairly generic higher education. After that, each campus would specialize. Armerding envisioned one campus specializing in medicine, another in humanities, and yet others in engineering and hard sciences. As one enthusiastic supporter put it, Armerding’s plan would create a “great Christian university,” similar in scope and prestige to Oxford and Cambridge.

What happened? For one thing, money was tight. Some of the charter members balked at the $1,500 membership fee. The coffers were far from the sixty-five-million-dollar treasure chest Armerding had proposed. Second, like all colleges, evangelical schools hated to give up any control. As evangelical intellectual leader Carl F. Henry noted privately in 1961, neighboring evangelical institutions had always stressed their differences from one another, not their similarities. Finally, member schools were generally far more interested in nuts-and-bolts campus issues than in creating a new academic powerhouse. By the 1970s, the early incarnation of the CCCU had come to focus more on lobbying for amenable tax policies than on combining academic programs. In 1976, it dropped the idea of a great federated evangelical university from its list of goals.

The failure of Armerding’s dream didn’t mean that the dream had died. Conservative evangelical academics always cherished the notion of re-establishing themselves as premier college leaders. These days, it has a new champion.

When Jerry Falwell Jr. hosts presidents and winning football teams, when he plows billions of dollars into chasing the dream of academic prestige and public acclaim, when he is appointed to a White House task force on higher education, he is far from the first conservative evangelical leader to strive to climb to the top of the higher-education ladder. Rather, Liberty University is merely fulfilling a century-old dream of all fundamentalist academics—taking back what they see as their proper role as leaders in American higher education.