Donald Trump’s Shameful Use of the “Star-Spangled Banner” Is, Alas, an American Tradition

Michael J. Pfeifer is Professor of History at the CUNY Graduate Center and at John Jay College of Criminal Justice. He is the author or editor of five books, including The Roots of Rough Justice: Origins of American Lynching (University of Illinois Press, 2011). 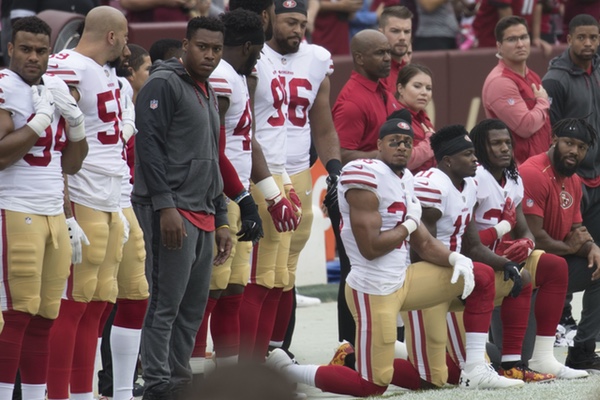 Members of the San Francisco 49ers kneeling during the National Anthem before a game, By Keith Allison from Hanover, MD, CC BY-SA 2.0

The National Football League's recent decision to compel players to stand for the national anthem if they are on the playing field highlights The Star Spangled Banner’s fraught and complex history as both a voluntary ritual of American patriotism and as a means to coerce symbolic demonstrations of fealty to American nationalism, not only in sports but also in music. 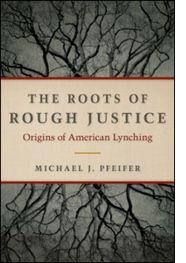 While the recent controversy involves the NFL’s desire to halt African American athletes’ publicly “taking a knee” on the field during the anthem as a protest of lethal, racialized policing, during the World War I era jingoistic Americans sought to compel German and German American musicians to demonstrate their loyalty to the United States by performingThe Star Spangled Banner. One of the outcomes of The Star Spangled Banner’s significance in the culture wars of the World War I era would be the U.S. Congress and President Herbert Hoover’s designation of the song as the national anthem in 1931, more than a century after Francis Scott Key had been inspired during the War of 1812 to write new lyrics for an eighteenth century British song, “To Anacreon in Heaven.”

In the early twentieth century, many of the musicians that filled the ranks of American orchestras had either been born or trained in Germany or Austria, while many of the leading orchestral conductors had German or Austrian backgrounds and the music of Germanic composers predominated on the programs of American orchestras. Tensions over American vs. Germanic values in the concert hall mounted as conflict with Germany and Austria-Hungary unfolded in World War I, especially after the U.S. entry into the war in April 1917.

Perhaps the most well publicized case of the The Star-Spangled Banner’s deployment as a test of American vs. Germanic loyalties involved Karl Muck, the Boston Symphony’s German-born music director (Muck was a Swiss citizen). Muck’s troubles began with the false accusation that he had refused to conduct The Star-Spangled Banner at a concert in Providence, Rhode Island in October 1917. The Boston Symphony’s management had in fact, without consulting Muck, declined a request to play the anthem, deeming it music more appropriate for a “military band” and beneath the dignity of “a classical music organization.” The ensuing controversy over Muck’s supposed refusal to conduct the anthem would eventually lead to the discovery of a cache of letters, some containing anti-American and pro-German sentiments, written to a nineteen-year-old Boston heiress, providing grounds for Muck’s arrest, prosecution, internment at Fort Oglethorpe, Georgia, and deportation after the war.

The Star-Spangled Banner would similarly become a proxy for American patriotism among symphonic concert-goers throughout the United States. For example, Emil Oberhoffer, the German-born conductor who had founded the Minneapolis Symphony in 1903 and led it within a decade to national prominence, was compelled to adapt after April 1917 to a cultural climate in which German nativity and identity were suspect and scrutinized for possible disloyalty to the Allied war cause.

Although German-born, Oberhoffer had long been a U.S. citizen (since 1893), unlike several German and Austrian conductors of American orchestras who came under suspicion, most notably Muck and Ernst Kunwald, the music director of the Cincinnati Symphony who would also be interned at Fort Oglethorpe, and Frederick Stock, the music director of the Chicago Symphony, who was compelled to step down for a period to take care of his citizenship paperwork.

Alfred Hertz, conductor of the San Francisco Symphony who was similarly subject to accusations of loyalty to Germany, had good timing in becoming a U.S. citizen in March 1917. Oberhoffer strongly professed his American patriotism and his “abhorrence of Prussianism” and by the 1917-18 season had adopted the practice of beginning every concert with America and concluding every program with The Star-Spangled Banner, while also prominently displaying in performance the orchestra’s service flag of five stars (one of them gold).

While the Minneapolis Tribune music critic Caryl Storrs slyly noted that some questioned whether the “national hymn” belonged with “Mozart and Brahms,” the orchestra (with the exception, for practical reasons, of the tuba player and the harpist) rose to their feet to play it, and Oberhoffer enthusiastically conducted; the patriotic anthems that began and ended the wartime concerts invariably received the most fervent applause of all the works performed, with Civil War veterans sometimes throwing their hats into the air at the end of The Star-Spangled Banner as the orchestra concluded its programs while on tour. News of the Armistice in November 1918 reportedly reached the orchestra while in rehearsal, prompting the “elated Oberhoffer” to lead the musicians to their feet for a rendition of The Star-Spangled Banner before dismissing them for the day.

The Minneapolis musicians’ numerous displays of patriotism during the war took shape in a context where suspicion and coercion often undergirded insistence on loyalty and 100 per cent Americanism. The orchestra’s tour manager, Wendell Heighton, seeking to preempt doubts of potential audiences on the road, insisted that there “are no slackers in our orchestra—every man is an American citizen and we speak only the English language.” Oberhoffer reportedly prohibited his musicians from speaking German in public or even backstage.

All of the orchestral personnel were required to sign loyalty pledges at the beginning of 1918-19 season and the musicians collectively purchased $20,000 in bonds for the fourth Liberty Loan. Cellist Emil Schultz, investigated and cleared by the Department of Justice after pictures of what were actually deceased members of the Austrian royal family (less offensive apparently than the living Kaiser and his family) were reported to be on the walls of his home, purchased several Liberty Loan bonds and was allowed to rejoin the orchestra. The Minneapolis Symphony’s patriotic displays persuaded many, including the editor of the Decatur(Illinois)Herald, who contrasted Oberhoffer and the Minneapolis orchestra favorably with Karl Muck and the Boston Symphony: “The leader of one great orchestra has been jailed for sedition, and the Minneapolis Symphony orchestra is recognized as a great patriotic force. What a contrast!”

Oberhoffer’s final weekend of concerts after his resignation in 1922 were similarly shaped by the searing wartime experience. Among the works performed were Richard Strauss’s Death and Transfiguration and Tchaikovsky’s Symphony no. 4, reflecting long-term emphases in Oberhoffer’s programming in Minneapolis.

In short, both recent events and the long span of American cultural history reveal that The Star-Spangled Banner is a short piece of music with a complicated history, constructively stirring many with an evocation of admirable American values but also used time and time again as a means to compel a public performance of conformity to a particular understanding of American nationalism.