Snopes: Did Ronald Reagan Warn Against “demagogues" Willing to Declare a Trade War Against America’s Friends?

The move prompted swift opposition at home, including by some in the president’s own party who warned of the deleterious effects of a trade war between the U.S. and its allies. Within days of Trump’s announcement, Canada, Mexico, and the EU vowed retaliatory tariffs on American products.

Among the rhetorical weapons brandished by opponents of the tariffs was a quote attributed to President Ronald Reagan, a conservative icon, inveighing against trade protectionism and labeling those who defended instigating trade wars with friendly countries “demagogues”: 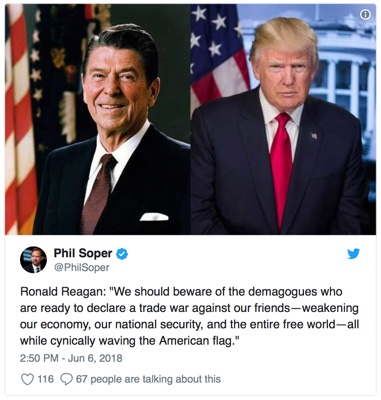 Our search for the provenance of the quote led us to a radio address delivered by Reagan (one of his last as president) on 26 November 1988. In it, he referred to protectionism as “a cheap form of nationalism” and told Americans that “[o]ur peaceful trading partners are not our enemies; they are our allies.”