The Overlooked Irony of the Red Hen Restaurant Incident

Wallace Hettle, Professor of History at the University of Northern Iowa, is the author of The Confederate Homefront: A History in Documents (LSU Press, 2017).

Recently, Sarah Huckabee Sanders was asked to leave the Red Hen, a small farm to table restaurant in Lexington, Virginia. After exiting quietly, Sanders unleashed a very uncivil right-wing outrage machine. She spread news of the incident via Twitter, leading Fox News and even the President to denounce the establishment. The restaurant had to shut down for more than a week in reaction to picketing and online harassment, ranging from death threats to hundreds of negative reviews on Yelp. 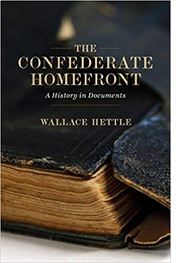 Sanders’s eviction happened in a week when she disingenuously defended the administration’s policy of tearing thousands of children from the arms of their parents, who had sought asylum in the United States. She even invoked the Bible to justify the cruelty. Immigration was not the only issue involved. Gay and transgender employees at the Red Hen objected to Donald Trump’s homophobic policies.

In the “Breaking News” coverage of this event, the media missed something that struck me as ironic. The Red Hen is across the street from the house of Confederate General Stonewall Jackson, which is still open to visitors.

The Red Hen, with its local cuisine, caters to a relatively new group: “foodies,” many of whom are liberals who deplore the industrialization of American agriculture. While not all visitors to Jackson’s house revere the Confederacy, it is a must see for the many tourists who romanticize the Lost Cause. Both establishments cater to tourists, but as Sanders discovered to her chagrin, not all tourist attractions are created equal.

Located in Virginia’s gorgeous Shenandoah Valley, Lexington is host to two colleges, Washington and Lee University and the Virginia Military Institute (VMI). Like most college communities, the town typically votes Democratic. But Lexington is not a typical college town. Robert E. Lee and Stonewall Jackson are both interred there, and Confederate heritage tourism thrives. The southern poet and literary critic Allan Tate once declared that Virginia’s reverence for Civil War heroes resembles “ancestor worship.” If Tate was right, Lexington is practically Mecca.

In the 1850s, Jackson taught optics—a combination of math and physics—at the Virginia Military Institute (VMI). He also oversaw artillery exercises. Famously, his teaching was so inept that the school nearly fired him. Following the war, Robert E. Lee spent the last five years of his life serving as president of the financially troubled Washington College. After his death, it was renamed Washington and Lee.

Local attractions include two statues of Jackson, one at his grave and another at VMI. A wall at VMI is inscribed with Jackson’s dictum: “you can be whatever you resolve to be.” Ironically, Jackson copied that modern phrase from a best-selling advice manual by William Andrus Alcott, an abolitionist and the uncle of Louisa May Alcott.

The VMI museum, which gets 50,000 visits a year, features Jackson memorabilia, including the mounted hide of Little Sorrel, his trusted warhorse. Its bones are interred on the school’s parade grounds, which also displays artillery from Jackson’s brigade.

At nearby Washington and Lee University, Confederate heritage abounds. In recent years, Confederate legacy has become more noticeably problematic than at VMI. The school has climbed in the rankings for liberal arts institutions. However, it is hard to imagine Washington and Lee attaining more national prestige without shaking off symbols associated with racism.

The University’s backers often package Lee as a man of “honor,” usually downplaying his antebellum activities in trading slaves and his brutal military tactics on behalf of a proslavery government. Instead, they try to market Lee’s college presidency and portray him, unconvincingly, as a figure of sectional reconciliation. Today, an institution of higher learning that celebrates such a person seems hopelessly out of date and tremendously callous.

Unfortunately, the school includes a chapel where Lee and his family are interred under a sentimental marble statue of the general in repose. Until very recently, the college held official events in the building, which included replica Confederate flags.

In recent years, the school has removed Confederate flags from the chapel, stopped conducting official events there, and installed a plaque tactfully recounting the “difficult, yet undeniable” history of slavery on campus. The school faculty voted to “suspend classes” on Martin Luther King, Jr. Day in 2016. This belated action rings in as less than a full-throated celebration of the holiday.

Both Washington and Lee and VMI are haunted by ghosts of the Confederacy. At the former, only 2% of students identify as African-American. In contrast, over 19% of students come from families in the top 1% of the nation’s income brackets. VMI is a public institution, but its student body hardly resembles the state of Virginia. About 5% of students are African-American, and female enrollment hovers a little over 10%.

Kicking Trump administration officials out of restaurants is not a viable strategy for change. It allows conservatives like Sanders to portray themselves as victims, even as they put children into cages without a fig leaf of due process. But while the restaurant’s action was politically off target, the impulse was courageous and humane. The irony that this controversy broke out in the shadow of Stonewall Jackson’s house would make him spin in his grave, and that’s a good thing.