Is Islam a Western Religion?

Juan Cole is the Richard P. Mitchell Collegiate Professor of History at the University of Michigan and the proprietor of the Informed Comment news site.  His most recent book is Muhammad: Prophet of Peace amid the Clash of Empires 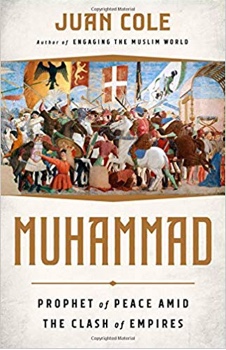 Donald Trump announced “Islam hates us” and then went on to exclude citizens of five Muslim-majority countries from the United States, on the grounds that they are inherently violent and require “extreme vetting.” In the language of critical social theory, Trump “othered” Islam, declaring it intrinsically un-American. It was Simone de Beauvoir (1908-1986) who introduced a new perspective on the distinction between self and other, arguing that women in her era differentiated themselves with regard to men, whereas men needed no such reference point. She wrote, “He is the Subject; he is the Absolute. She is the Other.” Her insight is just as apposite to the relationship of Christian European culture and Islam. But what if, as I argue in my new book, Muhammad: Prophet of Peace amid the Clash of Empires, Islam is not Other for those of European cultural heritage but very much Self?

The late Roman Empire with its capital in Constantinople had been unfairly neglected by historians until recently, when under the impact of scholars such as Averil Cameron and Peter Brown, the field of late antiquity has burgeoned. That empire made key contributions to our own world. Much law in Europe and the Americas is based on the Code of Justinian (r. 527-565). A legacy of intolerance could also be argued. The Christian Roman Empire outlawed the remnants of paganism and at some points in the sixth and seventh centuries attempted to prohibit the practice of Judaism. On its margins, German Arianism and Near Eastern Islam grew up.

As Peter Sarris, Garth Fowden and Glen Bowersock have argued, the Prophet Muhammad (c. 567-632) was much more a man of Roman late antiquity than most historians writing before the past decade had realized. Jacob of Edessa (640-708) observed that Muhammad went for trade from his native Western Arabia to Palestine and the eparchies or provinces of Roman Arabia and “Syrian Phoenecia.” The Iranian emperor Khosrow II invaded the Roman Near East in 603. In 614 his armies took Jerusalem, allegedly with the help of the large Jewish community in First Palestine, which had felt poorly treated by Constantinople. By 619 Egypt had fallen. Muhammad’s prophetic ministry for the most part coincided with this era of expansive Iranian rule and Roman retrenchment.

The Qur’an is a clear partisan for Rome in this era. In a passage likely stemming from the fall of Damascus in 613, the chapter of Rome 30:1–6 says: “Rome lies vanquished in the nearest province. But in the wake of their defeat, they will triumph after a few years. Before and after, it is God who is in command. On that day, the believers will rejoice in the victory of God; he causes to triumph whomever he will, and he is the Mighty, the Merciful. It is the promise of God; God does not break his promises, but most people do not know it.” This verse does not simply predict a Roman comeback (something expected by Muhammad’s contemporary, the early seventh-century historian Theophylaktos Simokates as well). It identifies this expected triumph of Constantinople over the Iranian capital of Ctesiphon with the “victory of God” at which Muhammad’s faithful will “rejoice.”

As Bowersock has recently shown in his Crucible of Islam, the Qur’an took sides with Emperor Herakleios (r. 610-641) against the aggressor, Khosrow II. In the teens, when Muhammad was based in the small West Arabian desert port of Mecca between his journeys to Gaza and Damascus, he preached monotheism and peace-making and turning the other cheek. Stories 28:52–54 says, “They will be given their reward twice over inasmuch as they patiently endured, and repel evil with good deeds and shared the provisions we gave them. And when they hear abusive talk, they turn away from it and say, ‘to us our deeds and to you yours; peace be upon you—we do not seek out the unruly.’ ” This ethos makes sense of the Qur’an’s opprobrium toward the Sasanians, who were clear aggressors in the war. Spoils 8:61 denounced belligerent warfare, saying, “If they incline toward peace, you must incline toward it.”

In 622 Muhammad and his followers were forced to emigrate to nearby Medina by militant pagans who had, as Bowersock pointed out, joined with Iran according to an eighth-century Muslim source. The pagan Meccans allied with local Bedouin to launch three wars on the nascent community of Muhammad in Medina. The Qur’an begins instructing the Prophet and his followers to defend themselves from lethal attacks, deploying arguments for just war in the Ciceronian tradition and sounding at times very much like Augustine of Hippo or Ambrose of Milan on that subject.

Moreover, the Qur’an depicts these small battles as helping to protect Christian churches to the north from the predations of the Arab tribes serving as foederati or military allies of the Sasanians. The Pilgrimage 22:39–40 observes: “He endorsed those who fought because they had been wronged, and in truth God is able to aid them—those who were expelled from their homes unjustly, solely for saying our lord is God. Had God not checked one people with another, then monasteries, churches, oratories and places of worship wherein God is much mentioned would have been razed to the ground.”

The ample evidence in the Qur’an for the alliance of Muhammad and his believers with the Roman Empire and with Christians was typically downplayed before Bowersock. This historical reality has been obscured by polemicists on both sides on Christian-Muslim conflict, whereas there has been a significant history of peaceful coexistence and political alliance between the two. The Qur’an’s preference for peace but allowance for purely defensive war has been little understood either by Western polemicists or Muslim extremists. It does not differ in any significant way from the stance of church fathers such as Augustine and Ambrose, and that it resembles in many particulars the positions of Cicero underscores the Roman context of the Qur’an. Imagining Muhammad back into the world of Roman late antiquity, as I urge we do in my book, erases the Self-Other divide and allows us to see in Muhammad and Islam a sibling with a common ancestor rather than an alien.