Four times as tall as the Statue of Liberty: India’s new monument to its ‘Iron Man’ 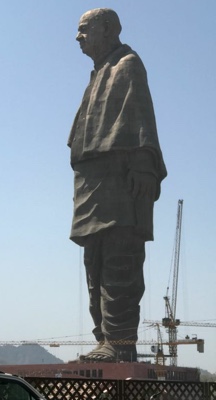 It is four times taller than the Statue of Liberty.

So big, in fact, that it will give India bragging rights to the world’s tallest statue — a nearly 600-foot creation that says as much about India’s global aspirations as it does about the political ego of its leader.

It may seem like a natural choice for an outsize tribute.

India’s new Statue of Unity, to be formally unveiled Wednesday, depicts Sardar Vallabhbhai Patel, an independence-era leader credited with uniting the fledgling nation in the 1940s when he served as India’s first home minister.