Derek Leebaert’s latest book is Grand Improvisation: America Confronts the British Superpower 1945-1957 (October 2018, FSG). For the first time an author and readers can discuss the book on an accompanying Knowledge Exchange platform. 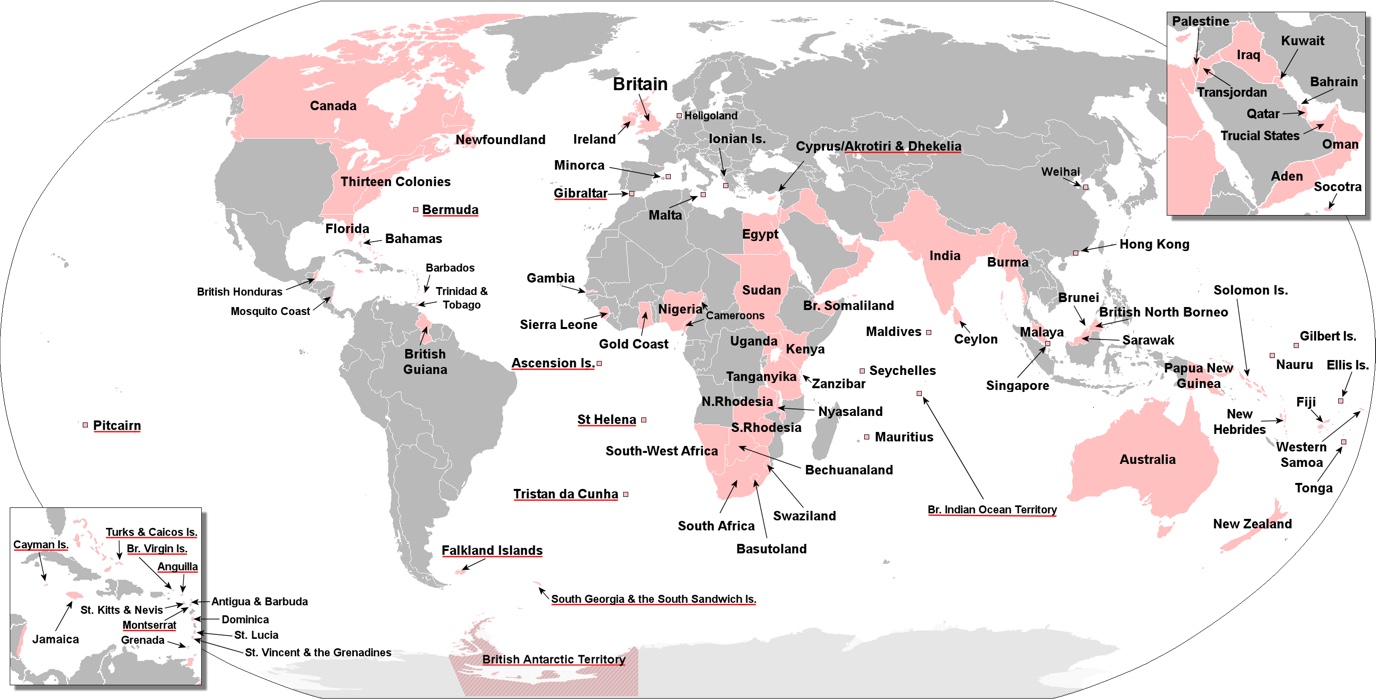 All areas of the world that were ever part of the British Empire. Current British Overseas Territories have their names underlined in red.

A frequently repeated tale about the twentieth century is this: At the end of World War II, the British Empire was too weak and too dispirited to continue as a global imperial power; thus a confidently prosperous, well-armed America assumed leadership of the West—and did so while creating a U.S.-led international order that we’ve lived with ever since. But it’s all a myth. Instead, the Americans ran smack into an Anglo-Saxon colossus whose war-hardened leaders wouldn’t step aside for anyone, let alone serve as junior partners. 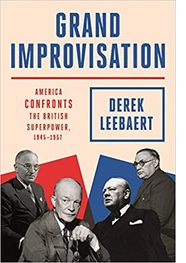 Not until December 1956 would the newly-reelected Eisenhower administration assert what it called a “declaration of independence” from British authority, and it did so amid a world order just taking form. As Richard Nixon recalled, only then did the United States explicitly take over “the foreign policy leadership of the free world.” At that point, Geoffrey Crowther, longtime editor of theEconomist, would finally admit that “Britain is no longer a Super-power.”

Today, as the world faces another time of historic geopolitical adjustment, it’s vital to understand what occurred during the dozen years after WWII when history’s largest empire battled to maintain its standing against an utterly novel form of global preeminence that loomed from across the Atlantic.

The British Empire and Commonwealth, after all, was the very definition of a “super power” when that term was coined in 1944 to categorize nations that possessed “great power plus great mobility of power.” The empire was planetary, with deep relationships nearly everywhere, including those of secret intelligence as well as a trading and currency regime which covered half the globe. Britain drew upon statecraft and experience that—as many U.S. officials, businesspeople, and generals believed—outweighed any nation’s.

With the war’s end, neither the Soviet Union nor the United States fully met that definition of “superpower.” The Soviet Union was the most massive unitary land power ever, yet it lacked overseas reach, except through spying and subversion. The United States was by far the world’s strongest nation, with an atomic monopoly and unprecedented industrial weight. But it was still a resolutely distant super-state, hesitant to assume a commanding political and military position. It took years to accept the need to garrison GIs in Europe and Asia, to develop a naval presence in the Persian Gulf, and to build an intelligence capability that offered more than amateurish adventuring.

Britain, in turn, was hardly “bankrupt” after WWII, as the myth as it. It retained a strong industrial base; its two great trading rivals, Germany and Japan, had been destroyed, and everyone expected that the huge American loan of December 1945 would provide a bridge to full and rapid recovery. In fact, Britain’s industrial productivity boomed beyond what anyone had imagined. To be sure, the searing balance of payments crises of 1947 and 1949 and 1952 threatened to pull down Britain’s economy by stifling trade, but even those dramas proved manageable as Britain led the world in jet aviation, life sciences, and civil atomic power—unquestionably the industries of tomorrow.

Meanwhile, the American press wrote of the Empire and Commonwealth deploying “a million men in a thousand garrisons worldwide.”

New materials show the British Empire’s importance to US policymakers and also the extent to which postwar dealings were confrontational. For instance, we now know that Foreign Office manipulations bluffed the Americans to intervene in Greece’s civil war during 1947, bringing forth the Truman Doctrine. In fact, the British were escalating in Greece.

By July 1950, when the United States was at war in Korea, President Harry Truman received a pivotal top-secret document: National Security Council Report 75, British Military Commitments. Historians have never seen it. In fifty-seven tight pages, NSC 75 concludes that the British Empire hadn’t retreated a whit since 1945, in contrast to decentralizing and adjusting, as in India and Palestine; that it was unlikely to retreat at all in the foreseeable future; and, in any event, that it would be impossible for the United States to replace the empire as a force of global stability. US views changed surprisingly slowly.

When Dwight Eisenhower became president in 1953, he acknowledged not only that Britain was dominant in the Middle East, as it was throughout this era, but also that it wielded a veto over U.S. decisions in Southeast Asia. Britain was a nuclear weapon state that possessed the strongest conventional forces in Western Europe. And, as is also known from new materials, it took much longer than has been believed for the CIA to overshadow MI6, Britain’s Secret intelligence Service.

Altogether, these dozen years were a time when top U.S. officials believed that America’s “biggest post-war difficulty”—perhaps more than the Soviet threat—was the inability to say no to the British Empire. In effect, serious people in Washington concluded that “no acceptable foreign policy” was available to the United States if it weren’t aligned with its sprawling, problematic ally. Eisenhower was, for the time being, candid in his awareness that global military ambitions, along with the attendant political involvements, were alien to the United States.

Yet frustrations accumulated in Washington—not least, over myopic British policies toward Egypt, culminating in the British/French/Israeli invasion of November 1956 at Suez.

The break point finally came in October 1957, when Russia launched the first Sputnik, a satellite propelled by an intercontinental ballistic missile that once and for all stripped America of its island security. Whatever happened, it was apparent that only the United States and the Soviet Union could compete at this level.

Americans, moreover, were gripped by dread that they would not be able to catch up. The were primed for the call of John F. Kennedy, the magnetic young senator from Massachusetts, who was soon to thrill the nation as he evoked “a struggle for supremacy” against Moscow’s “ruthless, godless tyranny.” We have been driven by such dangerous zeal until today, when a new array of irrevocable decisions presses upon us.