The Murky Origins of the Annual National Turkey Presentation

Suzy Evans is a literary agent, attorney, and author who holds a Ph.D. in history from UC Berkeley. Her books include "Machiavelli for Moms" (Simon & Schuster) and "Forgotten Crimes: the Holocaust and People with Disabilities." She can be reached at suzy@dijkstraagency.com and @suzyevans.jd.phd 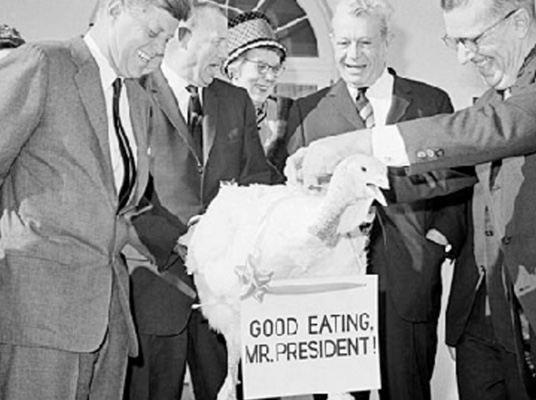 Some historians say that the origins of the National Thanksgiving Turkey Presentation date back to the 1860s, when Abraham Lincoln’s son Tad begged his dad to spare the life of a wild turkey that had been sent to the White House to be part of a holiday dinner. Others claim that the tradition began during the Truman administration. And while it's true that the National Turkey Federation has been providing holiday turkeys to the White House since 1947, there are no extant records to confirm that this is true. In fact, Truman joked to reporters that the turkeys he received were destined for the family dinner table. 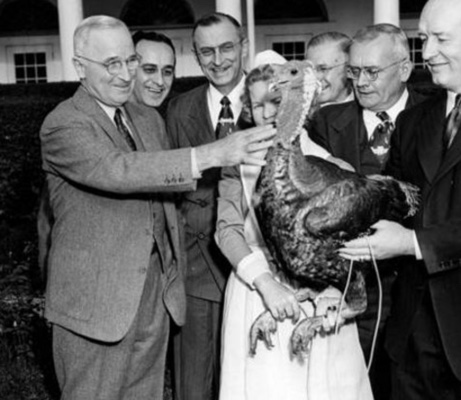 President Kennedy did “spare" a turkey's life on November 19, 1963, just days before his assassination, but didn't use the word "pardon." Instead, the fortunate fowl had a sign around its neck that read, "GOOD EATING, MR. PRESIDENT!”, which prompted Kennedy to quip, "Let's keep him going.” 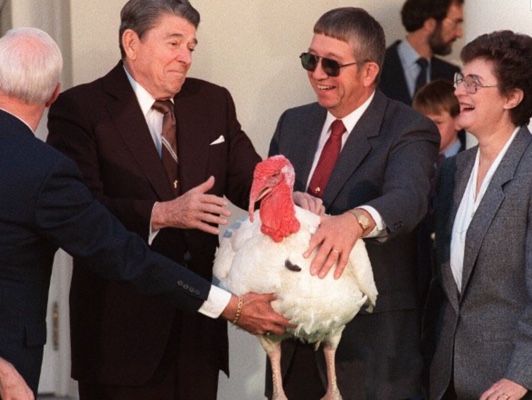 The first president to publicly utter the word "pardon" in reference to a holiday turkey was Ronald Reagan, who deflected questions in 1987 about pardoning Oliver North in the Iran-Contra affair by joking that he would also pardon a turkey named "Charlie," who was already heading to a local petting zoo.

Which brings us to George H.W. Bush, who was reportedly the first president to intentionally pardon a turkey. At the National Turkey Presentation Ceremony in 1989, Bush light-heartedly remarked: "Let me assure you, and this fine tom turkey, that he will not end up on anyone's dinner table, not this guy - he's granted a Presidential pardon as of right now - and allow him to live out his days on a children's farm not far from here."

Although it's difficult to say exactly when this tradition began, we do know where some turkeys were sent after receiving their presidential reprieves. From 1989 until 2004, the fortunate fowls were sent to live out their natural lives at "Frying Pan Farm" in Virginia.

The venue changed in 2005, however, when Disneyland was celebrating its 50th anniversary. That year, a turkey named Marshmallow and his alternate Yam, were flown first class to California, where Marshmallow became the Grand Marshal of Disneyland's Thanksgiving Parade with a sign above his float that read "The Happiest Turkey on Earth.” 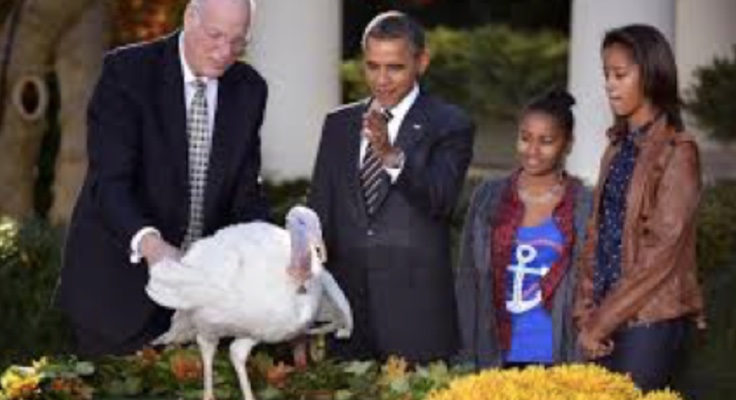 In 2009, the venue changed yet again. Instead of being sent to Disneyland, the 21-week-old gobbler that President Obama pardoned was sent to live out the rest of his short life at George Washington’s family estate at Mount Vernon in Virginia. Upon its arrival, he was driven to his pen "in a horse-drawn carriage and greeted with a trumpet fanfare."

And last year, two turkeys, named Drumstick and Wishbone, enjoyed a festive evening at a local four-star hotel and spent the moments before the pardoning being "serenaded by a band" and visiting the White House briefing room. After the ceremony, the birds were sent to Virginia Tech’s "Gobbler’s Rest" to "enjoy"the rest of their short lives in slaughter-free “freedom” and peace.