Steven C. Beda is a professor of history at the University of Oregon. 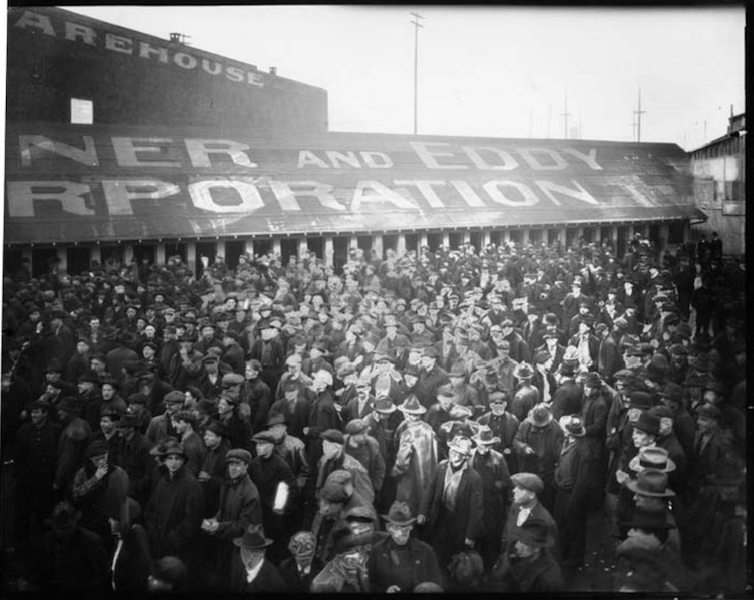 Seattle shipyard workers in 1919 as they walk off the job. Museum of History & Industry, CC BY

It shut down a major U.S. city, inspired a rock opera, led to decades of labor unrest and provoked fears Russian Bolsheviks were trying to overthrow American capitalism. It was the Seattle General Strike of 1919, which began on Feb. 6 and lasted just five days.

By many measures, the strike was a failure. It didn’t achieve the higher wages that the 35,000 shipyard workers who first walked off their jobs sought – even after 25,000 other union members joined the strike in solidarity. Altogether, striking workers represented about half of the workforce and almost a fifth of Seattle’s 315,000 residents.

Usually, as a historian of the American labor movement, I have the unfortunate job of telling difficult stories about the decline of unions. However, in my view, the story of this particular strike is surprisingly hopeful for the future of labor.

And I believe it holds lessons for today’s labor activists – whether they’re striking teachers in West Virginia or Arizona, mental health workers in California or Google activists in offices across the world.

The Seattle General Strike had its origins in the city’s many shipyards.

During World War I, workers flocked to Seattle to take jobs as welders, pipefitters, riveters and other dozens of jobs in the early-20th century shipyard. In 1918, there were about 16,000 shipyard workers in Seattle. Just a year later, their numbers had swelled to 35,000.

While work in the shipyards was plentiful, it wasn’t exactly lucrative. Throughout World War I, workers continually demanded wage increases, and employers routinely ignored them. As rents and the cost of living climbed, the workers finally announced that, absent higher wages, they were going on strike on Feb. 6. 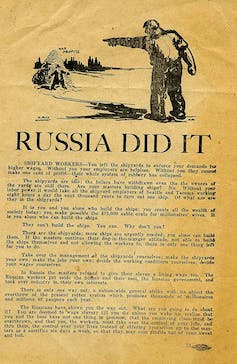 Many blamed Russian Bolsheviks for the strike. Tothebarricades.tk, CC BY

A few days before the deadline, the shipyard unions made a then-unprecedented request: They asked the Seattle Central Labor Council – which oversaw most of the city’s unions – to issue orders for a general strike, which brought out 25,000 cooks, waitresses, factory workers, store clerks and many others to join the 35,000 shipyard workers already striking.

Despite the usual divisions within unions along lines of race, gender, skill and citizenship, the majority of the locals belonging to the council voted to join the strike.

‘No one knows where’

Perhaps it was the rising cost of living that motivated workers across the city to walk off their jobs. Maybe it was a new culture of working-class solidarity emerging in post-World War I America.

Most certainly, it had much to do with the words of Anna Louise Strong.

A pacifist, feminist and welfare advocate, Strong made a name for herself reporting for Seattle’s Union Record, the major union newspaper in the city.

An editorial she authored on Nov. 4 encouraged Seattle’s workers to put aside their differences and embrace a new future in which all workers were united. Her editorial ended with what would become iconic lines in American labor history: “We are starting on a road that leads – NO ONE KNOWS WHERE!”

Strong’s point was to promote unity among Seattle’s workers, not advocate revolution, though that’s not how many politicians interpreted it. The Russian Revolution two years earlier still weighed on the minds of the city’s elite and many worried that Strong’s editorial was the opening salvo in a war to overthrow American capitalism. 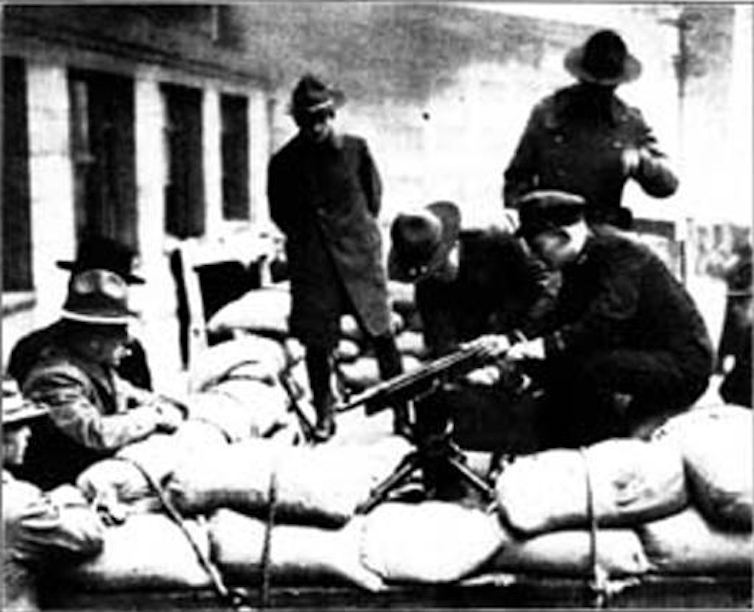 Police set up a mounted machine gun during the strike. The Town Crier Newspaper, CC BY

The violence that never come

Fearing violence, anti-labor organizations and the city’s politicians peppered the streets with pamphlets warning that Bolsheviks were behind the strike. Newspapers as far away as New York picked up Strong’s editorial and ran sensational stories of the strike that stoked alarm over a rising tide of radicalism.

While Seattle did lurch to a halt, the violence that Seattle Mayor Ole Hanson and others feared never came. Hanson called on the police force to maintain order in the city, through violence if necessary, and asked the governor to mobilize the National Guard. He even paid students from the University of Washington to patrol the streets.

But in the words of Earl George, a striking dockworker who went on to became the first African-American president of Seattle’s longshoremen’s union, “Nothing moved but the tide.”

What George and workers remembered as they walked away from their jobs was the peacefulness of the city. And with shops and restaurants closed due to the strike, the workers themselves pitched in to provide essential services, such as stocking food banks and washing sheets at hospitals.

A teacher at a public school in Denver participates in a march in January. AP Photo/David Zalubowski

The power of solidarity

What ultimately ended the strike, on Feb. 11, was the very thing Strong warned against in her editorial: divisions among workers.

Unions representing skilled workers began to fear that the general strike was undermining their prestige and began ordering members back to work. Other unions succumbed to the threats being made by Hanson and returned to their jobs.

In purely material terms, the strike was a failure. It also directly contributed to a new wave of repression and the “red scare” of the post-World War I era.

Yet, the strike was not without meaning. It’d proven to workers, both in Seattle and elsewhere, that there was power in unity, however fleeting. For five days, workers had shut down the city and then run it themselves.

For today’s workers tired of decades of wage stagnation and fleeting benefits in the gig economy, the Seattle General Strike offers an important lesson about the power of organized laborers: When united, workers can take on the most powerful foes.

Striking teachers, activists at Google and participants in the Women’s March, to name just a few examples, are today standing on the same road that Anna Louise Strong described 100 years ago.