How Do You Fire a Special Prosecutor? Ask Harry Truman.

Andrew Coan is a professor of law at the University of Arizona. This piece is adapted from his new book Prosecuting the President: How Special Prosecutors Hold Presidents Accountable and Protect the Rule of Law. 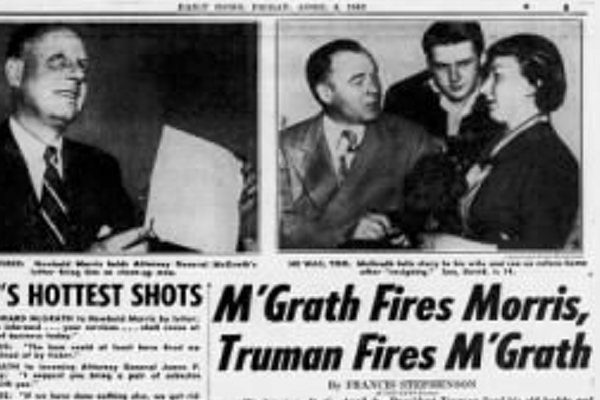 Who was the last President to fire a special prosecutor and get away with it?

Not Richard Nixon. When he fired Watergate special prosecutor Archibald Cox, public backlash immediately forced him to appoint a replacement who ultimately forced his resignation.

Not Bill Clinton or Ronald Reagan, both of whom endured seemingly endless special prosecutor investigations at the hands of Ken Starr and Lawrence Walsh.

No, it was the plainspoken, straight-shooting, modern folk hero Harry Truman.

By 1952, the final year of his final term of office, rumors of corrup­tion in Truman’s administration were swirling. The bulk of suspicion centered on the Justice Department and the Bureau of Internal Revenue, the predecessor of the Internal Revenue Service. Federal revenue collections had increased eightfold during World War II. The enormous expansion of the bureaucracy this required, virtually overnight, all but guaranteed that some bad apples would make it into the barrel. Now the bill was coming due. In 1951 alone, dozens of mostly low-level officials were forced to resign over allegations of bribery, extortion, and embezzlement. In a typical case, a small business owner or lawyer who owed back taxes would be subtly— and sometimes unsubtly— shaken down for bribes and other favors. Many of the officials involved were subsequently convicted and sent to prison.

“The cumulative impression,” as one Truman biographer describes it, “was of a tax bureaucracy rotten through and through, a president lax and complacent.” By the end of 1951, the cloud of scandal had expanded to encompass nearly a dozen fed­eral agencies. Exploiting the controversy, an ambitious junior sen­ator from California proposed that federal grand juries be allowed to appoint special prosecutors on their own authority. His name was Richard Nixon. Nothing came of this, but under mounting pressure, Truman announced that his attorney general, Howard McGrath, would lead an inquiry.

The public outcry was quick and forceful. As head of one of the departments to be investigated, the handsome, hard- drinking McGrath was hardly a disinterested party. In the eyes of many, he was part of the problem that needed investigating. Neither Congress nor the public trusted him to conduct a vigorous and impartial inquiry. To quiet the furor, Truman quickly acquiesced to the appointment of an outside special prosecutor. Following the advice of legendary federal judge Learned Hand, McGrath tapped a reform-minded New York lawyer named Newbold Morris for the job. 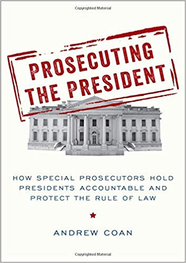 Cocksure and remarkably tone-deaf in personal interactions, Morris was an experienced lawyer but a neophyte in the ways of Washington. His investigation ran into obstacles right from the start. After a bizarre power struggle in Congress, he was denied the authority to issue subpoenas. Publicly, Morris declared that he did not need it because Truman had promised him full cooperation. If every executive employee voluntarily turned over documents and submitted to questioning, Morris would have no need to resort to judicial orders. But Attorney General McGrath had other ideas. Matters came to a head when Morris demanded that McGrath turn over detailed information about his own activities and per­sonal finances. The Attorney General refused to comply and sum­marily dismissed Morris, who had held office for just two months. Hours later, Truman fired McGrath.

Just why Morris and McGrath met such unceremonious ends remains unclear. It is also unclear whether Truman knew or approved of Morris’s firing in advance, though he probably did. But nearly all sources agree that Morris was poorly suited to his role. As one administration insider remembered it, “If you had deliberately run through a computer analysis of the kind of person who would present a good public image of a reformer, but would not make an investigation or find anything, you would have picked Newbold Morris.” McGrath may well have chosen Morris for this very reason.

This is a serious risk any time a President or his subordinates appoint a special prosecutor. Generally, Presidents acquiesce in such appointments only under political duress. To signal their own innocence and commitment to a serious investigation, they must select a figure with an unimpeachable reputation for integrity. But from the administration’s perspective, the ideal choice will often be a well-respected incompetent—one who will make a good show of conducting an independent inquiry without actually accomplishing anything.

If this is what Howard McGrath had in mind when he selected Newbold Morris, he got more than he bargained for. Morris was not an experienced investigator or a skilled bureaucratic politician, but he was genuinely committed to good government and determined to root out whatever corruption might be lurking in the Justice Department. When McGrath fired him for overzealousness, he left Truman little choice but to fire McGrath as well.

There is a close parallel to Watergate. When Nixon fired the first Watergate special prosecutor Archibald Cox in the famed “Saturday Night Massacre,” Nixon charged his chief of staff Alexander Haig with finding a replacement much like Newbold Morris. Any plausible candidate needed to be more pliant than Cox but also to possess sufficient stature and reputation to pass muster with Congress and the public.

Haig thought he had found his man in Leon Jaworski, a conservative Texas Democrat who had previously served as president of the American Bar Association. Like McGrath, however, Haig got more than he bargained for. Instead of providing political cover for Nixon, Jaworski definitively exposed him as a crook, effectively ending his presidency.

Compared to Watergate, the Truman tax scandals were remarkably small-bore—“piddling” even, to quote one Truman biographer. Nevertheless, they teach an important lesson about the relationship between special prosecutors and democratic politics.

On the one hand political pressure forced Truman to permit a genuinely independent investigation of his own Justice Department. The special prosecutor appointed to conduct that investigation was overmatched and not allowed to com­plete his work. But his dismissal immediately led Truman to fire Attorney General McGrath, who headed the scandal-ridden department. Asked to reflect on his investigation, Newbold Morris reportedly remarked: “If I got rid of nothing else, I got rid of Howard McGrath.”

On the other hand, Truman was a lame duck when these scandals arose. As a result, he never seems to have felt any strong pressure to get to the bottom of the matter. A subsequent con­gressional investigation concluded that Morris’s experiences were “replete with indications of bad faith toward his work on the part of his superiors.” Truman’s firing of McGrath was at best a partial response. It also short-circuited any serious further investigation.

The lesson is clear. When a president no longer feels political pressure to support an independent investigation, a special prosecutor can do little of importance. In such circumstances, special prosecutors may be rendered ineffectual even with the support of the American people. Without that support, their failure is virtually inevitable.