Political Leadership and the Need for a New American Story

Walter G. Moss is a professor emeritus of history at Eastern Michigan University a Contributing Editor of HNN. For a list of his recent books and online publications (over 300), click here. His most recent book is In the Face of Fear: Laughing All the Way to Wisdom(2019), which treats humor from a historical perspective. 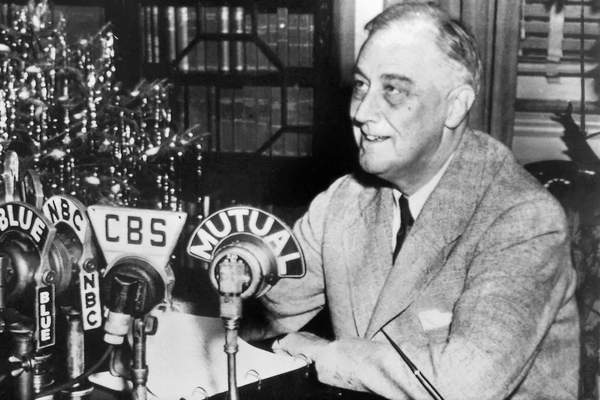 I recently came across Political Humor (1977) by Charles Schutz, and it detailed what a great storyteller Abraham Lincoln was. That got me thinking, “What other notable presidents were also good storytellers?” “How are stories and storytelling related to effective political leadership?” “Do we need a new American Story?”

I checked out Franklin Roosevelt and found that historian Cynthia M. Koch wrote that FDR used heroic individuals like Washington and Lincoln “to tell stories that would unite people and provide comfort, courage, reassurance, and inspiration to Americans facing fear, hardship, uncertainty, and war.” The FDR Foundation added that “to heal a wounded nation,” FDR relied “in no small part” on “storytelling” . . . to tap into humankind’s primeval need to understand issues not only in intellectual terms, but on an emotional level as well.”

This sounded much like Lincoln. At a cabinet meeting he once said, “I don’t propose to argue this matter because arguments have no effect upon men whose opinions are fixed and whose minds are made up.” Instead, he told a story to illustrate his point.

Both great presidents possessed an acute understanding of the common people. Lincoln’s came partly from his origins among common frontier folk, but the aristocratic Roosevelt, who campaigned extensively throughout the nation, “principally relied on his feel for public mood to guide him in leading the country.” Yet both presidents understood that to reach people, to motivate them, to win them over, a president had to appeal to their emotions, and storytelling was one way of doing so. Carl Sandburg, who wrote a six-volume biography of Lincoln and was a strong FDR supporter, saw numerous parallels between the two presidents, especially their attunement to the will of the American people.

In recent years much has been made of the great U. S political divide. In a previous article, I mentioned that Donald Trump appeals to the anti-intellectual strain in American life earlier highlighted by historian Richard Hofstadter’s Anti-Intellectualism in American Life (1962). Liberals, progressives, and even some thoughtful conservatives bemoan the anti-intellectualism of Trump supporters. “Why do they believe the steady spew of lies told by Trump and all his talk of ‘fake news’”? “How can they deny the scientific consensus on climate change?”

The answer is simple. Our problem is that we keep forgetting it: Most people’s politics are not based on reason or rationality. This was a good part of the message of former HNN editor Rick Shenkman’s book Political Animals, as well as earlier ones like Predictably Irrational andThe Righteous Mind.

Supporters of former President Obama are especially prone to forgetting this message, for he spoke on an intellectual level more than most politicians. In 2009, former presidential adviser and television journalist Bill Moyers stated that in the medical care debate Obama “didn't speak in simple, powerful, moral, language. He was speaking like a policy wonk.” In 2011, a similar criticism came from historian John Summers, who wrote that Obama paid insufficient attention to the irrational and emotions, and that conservatism was better at recognizing that “successful politicians tapped into the collective unconscious of voters, controlling their perceptions.” Liberalism, however, as Lionel Trilling wrote in Liberal Imagination (1950), “drifts toward a denial of the emotions and the imagination.”

Not coincidently, Junot Diaz wrote in 2010 that one of the main responsibilities of a president is to be a good storyteller, and that President Obama had failed miserably in this regard. “If a President is to have any success, if his policies are going to gain any kind of traction among the electorate, he first has to tell us a story.” [In his pre-presidential days Obama had told a good story in his Dreams from My Father.] Republicans, Diaz believed, were “much better storytellers.”

In contrast to Obama, President Reagan did pay more attention to the irrational and to storytelling, as Jan Hanska emphasized in Reagan’s Mythical America: Storytelling as Political Leadership (2012). Historian Koch agrees: “Like FDR, he [Reagan] was a great storyteller.” He used stories “to look backward to an earlier time to promote ideas of self-reliance and free enterprise.” President Trump, though not much of a storyteller, also appeals to myths about America’s past—note all the “Make America Great” hats worn by his supporters.

But how does storytelling help political leaders? Lincoln provides some interesting insights.  He believed it often helped “avoid a long and useless discussion . . . or a laborious explanation.” Moreover, it could soften a rebuke, refusal, or wounded feelings. Influenced by Aesop’s fables, as well as the parables of Jesus, Lincoln intuitively understood that to sway the American public simple stories were often more effective than reasoned arguments. As he once stated, “They say I tell a great many stories . . . but I have found in the course of a long experience that common people . . . are more easily informed through the medium of a broad illustration than in any other way.” In his emphasis on Lincoln’s storytelling ability and the humor that often accompanied it, Schutz notes that they reflected his ability to identify with the common people, his appreciation of their practical bent, and his good-natured acceptance of the flawed human condition.

More modern thinkers also have recognized the usefulness of storytelling for political purposes. In a book on violence John Sifton quoted the philosopher Richard Rorty on the usefulness of “sad stories,” rather than reasoned appeals to change people’s minds about using violence. Similarly, British climate-change activist Alex Evans came to realize that bombarding people “with pie-charts, acronyms and statistics” was not persuasive enough and that activists “could only touch people's hearts by telling stories.” He believes “that all successful movements, including those that overturned slavery and racial discrimination, consisted of a network of small and large communities held together not by common calculations or common acceptance of certain technical facts, but by commonly-proclaimed narratives about the past and the future. In his view the political shockwaves of 2016, including Brexit and Donald Trump's victory, reflected the winning camps’ ability to tell better stories, not their superior command of facts.”

Futurist Tom Lombardo believes that the personal narratives we tell ourselves “give order, meaning, and purpose to our lives.” He also writes that “the most powerful way to generate change is to change the personal narrative. . . . Similarly, to change a society, its grand narrative needs to be changed” to one that will help provide “society a sense of integrity, distinctiveness, and overall purpose.”

In a 2016 HNN essay, historian Harvey J. Kaye argued that “the time has come for progressive historians and intellectuals to join with their fellow citizens in the making of a new American narrative,” one that would “encourage renewed struggles to extend and deepen American democratic life.” We now have at least one such narrative, Jill Lepore’s These Truths: A History of the United States (2018).

In a recent Foreign Affairs essay, “A New Americanism: Why a Nation Needs a National Story,” she asks, “What would a new Americanism and a new American history look like?” Her essay and book answer that they would accept and celebrate our ethnic, religious, and gender-identity diversity. In both works, she quotes from an 1869 speech of Frederick Douglass where he refers to a “‘composite nation,’ a strikingly original and generative idea, about a citizenry made better, and stronger, not in spite of its many elements, but because of them.”She ends her essay by criticizing those with a false view of our nation. “They’ll call immigrants ‘animals’ and other states ‘shithole countries.’ They’ll adopt the slogan ‘America first.’ They’ll say they can ‘make America great again.’ They’ll call themselves ‘nationalists.’ Their history will be a fiction. They will say that they alone love this country. They will be wrong.”

In two earlier HNN essays (here and here), I wrote of the need for a new “compelling, unifying vision that a majority of Americans would embrace.” It would build upon the visions suggested in the 1960s by Martin Luther King, Jr. and Robert Kennedy, which foreshadow Lepore’s “new Americanism.” In addition, it might sprinkle in the spirit of Carl Sandburg (1878-1967), “the one living man,” according to Adlai Stevenson, “whose work and whose life epitomize the American dream.” It would also recall other qualities that our country has demonstrated in its finest moments such as tolerance, compromise, pragmatism, generosity, and a willingness to undertake great tasks.

Biographer of Ben Franklin, Walter Isaacsonwrotethat our forefathers who wrote the Constitution demonstrated that they were great compromisers. Also, for Franklin “compromise was not only a practical approach but a moral one. Tolerance, humility and a respect for others required it. . . . Compromisers may not make great heroes, but they do make great democracies.”

Today we again need to demonstrate both the idealism and compromising ability of the Constitution makers. Our present climate-change crisis provides such an opportunity. The Democrats’ Green New Deal reflects our idealism and willingness to once again take up a great task—as FDR did in fighting the Depression and mobilizing U. S. power in World War II. But transforming this idealistic resolution to effective legislation also requires political compromises.

As various Democratic presidential contenders vie for the 2020 nomination, we need at least one of them to provide a unifying vision. Being a storyteller able to relate to and inspire most Americans, like Lincoln and FDR did, would also help create a “new Americanism.” So too would a Republican change of heart about compromise, a word most of them have rejected for far too long.