Oh, What a Beautiful Piece of American History 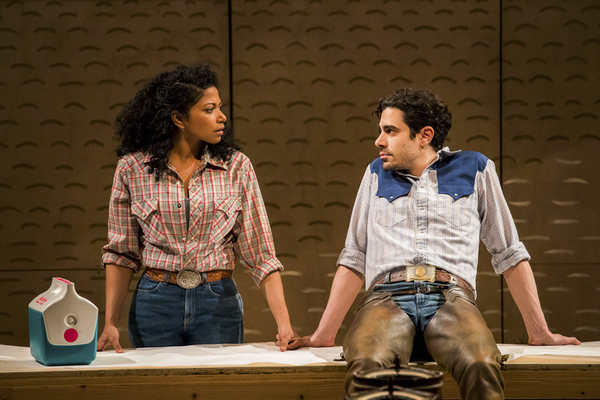 Oklahoma!, one of the great musicals of show business history, often loses its own history amid all of those gorgeous Richard Rodgers and Oscar Hammerstein songs. The play is a straight forward, and yet very complex, story of ranch hands and their women on farms in the bustling Oklahoma territory in 1906, just before Oklahoma became the 46th state. The simplicity and beauty of that life is the basis for the marvelous, new and different version of the play, that opened last week in New York at the Circle in the Square Theater at 1633 Broadway.

The play starts with ranch hand Curly, played superbly by the multi-talented Damon Daunno, a cowboy star in the Oklahoma territory who is desperately infatuated with farm girl Laurey. He stands up and, with a gorgeous voice, sings one of the signature songs in the musical, Oh, What A Beautiful Morning. It kicks off a play that is full of new romances, busted romances, patched up romances, a lot of violence, dark conversations, threats and a wild and wooly battle for the middle of America in a very divided country (sound familiar?). It is the men vs. the women, the good vs. the bad and the cowboys vs. the ranchers, all scrambling for a piece of the Oklahoma territory just after the turn of the century, in 1906, and all of the promises and dreams within it.

This new version is pretty much the same as all the other plays and movies (the 1955 film version won three Oscars) and yet, at the same time, it is distinctly different. The others were grand sprawling sagas with lots of props, such as the time-honored surrey with the fringe on top, farmhouses and barns. There are none of them in this new play, majestically directed by Daniel Fish. All the director gives the audience here is an empty stage with chairs, some spectators on the periphery, a small orchestra (all happily wearing cowboy boots) placed carefully in a shallow pit and that luscious music that drifts through the air and soothes the hearts of everyone in the theater.

The story (Hammerstein also wrote the book) develops nicely. Curly wants to take Laurey to the local dance but she had already promised to go with Jud Fry, a menacing, malevolent cowboy whom nobody likes. She only did it, she tells friends, to spite Curly. This sets off a battle between Curly, Jud and Laurey, in addition to the fight between cowboy Will Parker and traveling salesman Ali Hakim for the hand of the boisterous cowgirl Ado Annie. There is a lot of back and forth and the plot is told with the wonderful songs as well as dialogue. Those tunes include Oh, What a Beautiful Morning, The Surry with the Fringe on the Top, People Will Say We’re in Love, Kansas City, I Can’t Say No, and the rousing, burn-down-the-barn title song, Oklahoma!

Even though this is a barebones show, it has some marvelous special effects. At one point, Curly and Jud are arguing over Laurey with some pretty dangerous and threatening dialogue. Curly even suggests that Jud Hang himself. The whole scene is presented in the dark, so that you only hear their voices of the two men. Part of that confrontation is a huge, haunting, slightly out of focus film of Jud talking. It fills the stage wall.

Many of the conversations in the story are done with dark lighting and stirring music to add a sense of foreboding to the drama. There is some gunplay, pretty authentic for the era. An anti-gun theme is evident around the walls of the theater, where over a hundred rifles and standing in wall racks, ready to be fired at any moment if there is trouble somewhere in the territory of Oklahoma.

The story of the land and the people battling over it, the tale of yet another new frontier in U.S. history, is absorbing and the same story that developed in every other U.S. territory, whether it was Arizona, Alaska or Oklahoma. The play tells the tale of an America that, out there in the cornfields, is bursting at the seams. And, at the same time, it tells the story of Oklahoma, ranchers, cowboys and city folk.

In the play you learn about all the hard work the cowmen and ranchers put into make their ranches successful, the social customs of Oklahoma, and the mid-west, in 1906, the dances, the dating, the generational battles, and marvel of country folks for city folks, told so well in the tune Kansas City.

Amid all of this history is the story of the young people, helped and guided by the older ones, as they try to find their place in Oklahoma, America, and the world. It is a nicely told saga told within all of those memorable tunes.

Stetsons off to director Fish for not just re-staging, but re-inventing this classic musical. He used all of his genius to create a sensational new play out of an equally sensational old one. He gets significant help from a gifted groups of actors, including Daunno as Curly, Mary Testa as Aunt Eller, who holds the chaotic life of the prairie together through all of its storms,  Rebecca Naomi Jones, a fine singer and whirling dervish of a dancer as Laurey, James Davis as the stoic, hunkered down Will Parker, Ali Stroker as his beloved girlfriend Ado Annie, Patrick Vail as the villain Jud Fry,  Anthony Cason as Cord Elam, and Will Brill as salesman Ali Hakim.

The play started its musical journey in 1931 as Lynn Riggs’s Green Grow the Lilacs. It wound up with Rodgers and Hammerstein, who in 1943 made it into their very first, of many, shows. In 1944 it won a Pulitzer Prize. The play was a huge commercial hit and ran on Broadway for nearly seven years. Revivals of it over the years have won numerous Tony Awards. The 1955 movie, starring Gordon Macrae, Shirley Jones and Rod Steiger, garnered three Oscars.

The folks connected to the original play really should have taken some time to give people in the audience a little history about sprawling, ever green and inviting Oklahoma that was so central to the show. The big push for statehood started in the 1889 Oklahoma Land Rush, in which 50,000 energetic settlers raced across the territory’s plains in wagons, carriages and on horseback to claim two million acres of free land, a race into history sanctioned by the U.S. government as a way to populate the huge piece of Midwestern landscape.  As the new settlers developed it, the need for statehood grew. Ironically, after the success of the play, the state of Oklahoma named the title song of the musical as it’s official state song.