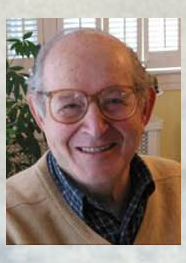 I knew Murray Polner, HNN’s book editor until May 2017, long before I began submitting reviews.  This was his second stint as my editor, the first being in the 1990s, when I became a contributing writer for PS: The Intelligent Guide to Jewish Affairs.

PS was a newsletter he created with co-editor Adam Simms, as a postscript to his time as editor-in-chief of Present Tense, published by the American Jewish Committee from 1973 to 1990 as a liberal counterpoint to Commentary.  (That other AJC publication had evolved under Norman Podhoretz from a forum for liberals and moderate leftists to become the earliest exponent of a new intellectual and political current known as neoconservatism.)

Working with Murray at PS, I got to know him and his wife Louise personally.  I recall visiting their home in Great Neck a couple of times, including for a vegan Passover Seder.  And I was privileged, over 20 years ago, to be included in a big bash at a Manhattan venue in honor of his 70th birthday.

His career trajectory was astonishingly distinctive.  He served in the US Naval Reserve from 1947 to 1952 and then in the US Army from 1953 until ‘55, but he became disillusioned with the military and evolved into a pacifist. In this connection, he worked with a local antiwar group to oppose the possible renewal of military conscription after the Carter administration reinstituted compulsory registration for young men.  And he served as the editor of Fellowship, the organ of the pacifist Fellowship of Reconciliation from 1991 to ’93.

In the late 1950s and early ‘60s, Murray taught at Thomas Jefferson High School in Brooklyn, and then in adjunct capacities at Brooklyn College, Queens College and Suffolk Community College.  He also served as executive assistant to Harvey Scribner, the first chancellor of New York’s public school system.

After graduating CCNY in 1950, he pursued graduate studies in the late 1960s, earning an MA in history from the University of Pennsylvania and a Ph.D. in Russian history at Union Institute and University in 1972. In the meantime, he began publishing the first of his eight books, No Victory Parades: The Return of the Vietnam Veteran, in 1970.  Then came a work on amnesty for draft resisters, When Can I Come Home? a Debate on Amnesty for Exiles, Antiwar Prisoners, and Others in 1972.

The first of his books with a Jewish theme was Rabbi: The American Experience, published in 1977. This was followed with two anthologies, one in 1994, The Challenge of Shalom: The Jewish Tradition of Peace & Justice, co-edited with Naomi Goodman, and Peace, Justice, and Jews: Reclaiming Our Tradition, co-edited with Stefan Merken in 2007.

He linked his passion for baseball with his devotion to social justice in Branch Rickey: A Biography. Published in 1982, this was about the sports executive who broke the color line in Major League Baseball by bringing Jackie Robinson to the Brooklyn Dodgers in 1947.

Returning to the theme of pacifism, Murray felt the need to enlist a knowledgeable Catholic as co-author of Disarmed and Dangerous: The Radical Lives and Times of Daniel and Philip Berrigan, the militant anti-war priests, published in 2007.  His choice was Jim O’Grady, a biographer of the Catholic political radical, Dorothy Day, and a reporter for WNYC public radio.

Murray’s pacifism drew admiration from the antiwar right as well as the left.  In 2008, he co-edited We Who Dared to Say No to War: American Antiwar Writing from 1812 to Now, with Thomas E. Woods, Jr., a libertarian.  And from 2001 until 2015, Murray wrote numerous scathing opinion pieces on US foreign policy for the rightwing antiwar website, LewRockwell.com,  which mourned his passing immediately upon news of his death with a piece by Mr. Woods.

This is what Rick Shenkman, HNN’s founder, emailed to his son, Rob, upon learning of his passing:

“Murray went back almost to the beginning of HNN nearly 20 years ago. I marveled at his productivity into his nineties and his subtle grasp of the key issues facing the country.

“I knew he was slowing down when he asked to retire as HNN’s book editor, but then he surprised me by indicating he wanted to keep up the blog.  And so he did!

“Murray played a big role at HNN and was instrumental in our success.

“I admit I was always jealous because he made writing seem easy.  But when you looked deeply into his complex sentences you realized he was an old-fashioned wordsmith who worked over his paragraphs until they sang.”

And this is from Rob’s message to Rick:

“Just a few days before we lost him, he dictated to me a letter to the editor of the NY Times, asking why the editorial page had not seen fit to warn about a possible US war with Iran. That was my dad, a lion to the end, yet also as sweet as a pussycat.”

Murray is survived by Louise, his wife of over 68 years, their daughter Beth Polner Abrahams, their two sons, Rob and Alex, and six grandchildren.  May his memory long endure.