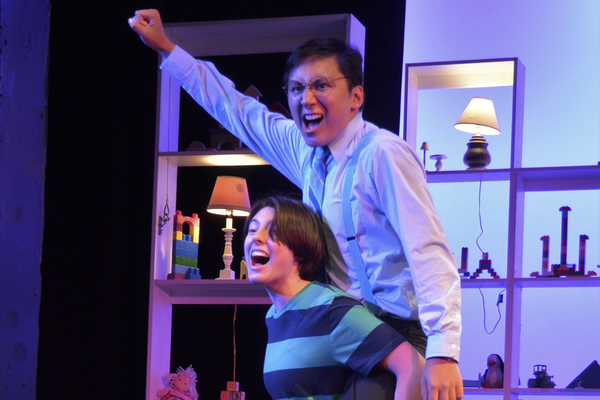 It is 1979 and sodomy is illegal in some states and cross-dressing in others. It has been ten years since the Stonewall riots in New York. The gay community has emerged from the closets of the nation but was still trying to find itself. Marvin, a headstrong, good looking young man, is married to his beloved Trina and the father of an adorable ten year old boy, Jason. Life is good, life Is strong, but Marvin has a problem. He is in love with another…a guy.

He leaves his wife and son and moves in with his boyfriend. His wife, stunned, falls for and lives with her psychiatrist, Mendel. The ten year old boy is thunderstruck by all this activity and concentrates on playing to playing Little League baseball a bit better to keep calm.

Their story is told in a new revival of the 1980s musical Falsettos, that just opened at the Princeton Summer Theater, in Princeton, N.J.

This version of Falsettos is rock solid, a super musical with fine acting, sharp direction, edgy songs and a solid, and quite emotional, story to tell.

I wanted to see this play about 1979 because all the problems the gay community faced forty years ago remain today, but the solutions are better, the public perception of those problems better and the people who have the problems today do not suffer as their forebears did back in 1979. Life for gays in America is better, but not yet as good as it is for heterosexuals.. That theme is underscored in Falsettos, that has music and lyrics by William Finn and book by Finn and James Lapine. Today, though, Falsettos is more than a good play; it is an historic look backwards at the suddenly open lives of gay men and women and the troubles they were besieged by, legal, cultural and medical, in the early 1980s.

Falsettos is a triumphant, but not an altogether happy, tale. Marvin does not find true love with his new boyfriend in 1979. They split up and he is left stranded because his wife has moved in with the psychiatrist. Marvin has lost her and has nearly lost his son.

Trina, the wife, who faces more problems than the Biblical Job, wants the kind of straight, traditional loving relationship with the psychiatrist that she so badly desired with Marvin, but did not get. She is looking for a safe harbor in a mixed-up world and finds it – somewhat.

The songs in the play are good and help to tell the story. They also add nuances to the play. As an example, the opening number is a very hip “Four Jews in a Room Bitching,” a very witty tune, and it sets up what you think is going to be a funny play, which is it, for a while. Later songs, such as “I’m Breaking Down” and “Something Bad Is Happening,” give the play its serious side.

Falsettos is a fine show, but has its problems. It is a good twenty minutes too long. The performance I saw ran nearly an hour and forty-five minutes. There are several songs in the first act that are redundant and could be cut along with a scene or two. In fact, here are 37 songs in the play, way too many. This is a play, not an opera. The first act also drags a bit here and there and the storyling gets lost. The second act is much better. Not only is the story tighter, but far more dramatic and introduces two gay women to the storyline. The second act also expands the plot from marital woes to social and cultural troubles for this torn family and brings in the medical woes that gays faced in the 1980s.

Director Daniel Krane has overcome these problems, though, by offering up a fast-moving story that is heavy on emotion. He has a fine cast that works well as an ensemble. Its members also shine in their work as individuals. They are Michael Rosas as Arvin, Justin Ramos as Mendel, Dylan Blau Edelstein as boyfriend Whizzer, Hannah Chomiczewsi as Jason, Chamari White-MInk as the doctor and Michell Navis as Cordelia. Their neat dance numbers are choreographed by  Jhor Van Der Horst.

This thirty year old musical about gay life is decidedly not worn out or dated. It is as vibrant today as when it first debuted  in New York.

What’s interesting about it is that today the play offers a nice historical window for people to look back at the gay rights crusade, and all of its triumphs and tragedies, by viewing a play that debuted right in the middle of it.

Much is different about gay life today than in 1979. Marriages between gays are legal now,, as an example. Yet many of the troubles homosexuals faced back in the ‘70s still exist. Finn and Lapine could rewrite this play set in 2019 and the plot and characters would pretty much remain the same. It would still be a powerful punch in the stomach tale, though.