by David Wolman and Julian Smith

David Wolman and Julian Smith are the authors of ALOHA RODEO: Three Hawaiian Cowboys, the World’s Greatest Rodeo, and a Hidden History of the American West. 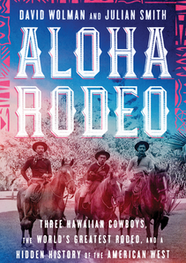 At the turn of the 20th century, three Hawaiian cowboys arrived in Wyoming to compete in a rodeo extravaganza. What happened next overturned much of what people thought they knew, and still think they know, about Hawaii, the American West, and the relationship between the two.

August 20, 1908: The crowd at Frontier Days in Cheyenne, Wyoming waited excitedly for a cowboy to step into the arena. It was the first of three days of competition at the biggest rodeo in the world. Winning in Cheyenne was the rodeo equivalent of Olympic gold. For weeks the small city at the foothills of the Rockies had been abuzz with talk of three men who traveled from thousands of miles away to vie for the title of champion roper.

The mysterious riders from afar had dark skin, long rawhide lariats, and flowers around the brim of their hats. Ikua Purdy and his cousins, Archie Kaʻauʻa and Jack Low, were paniolo, Hawaiian cowboys. Their forebears had been roping cattle in the islands decades before there was such thing as an “American” cowboy.

The early years of the new century marked a tense time in Hawaii. American business interests had orchestrated an overthrow of Hawaii’s monarchy in the late 1800s, followed soon after by forced annexation. For many people throughout the archipelago, these events and this new political reality were not only traumatic, but they also created uncertainty and anxiety. What would incorporation into the United States mean for Hawaiian culture, Hawaii’s future? Within this context, the story of Ikua and his cousins is much more than a rodeo matchup. These Hawaiians were accidental ambassadors of their people.

Meanwhile, frontier towns like Cheyenne were undergoing their own dramatic changes. The boom years of the great cattle drives that had made Cheyenne—for a brief window of time—one of the richest towns in the world, had ended with the arrival of homesteaders and barbed-wire fences that partitioned the vast rangelands. Civilization was surging into the future, with the advent of technologies like cars, airplanes, and moving pictures. Yet life in Cheyenne remained hard, and even harder for the Native Americans who had been forced from their ancestral lands.

At the same time, residents of Wyoming watched as “the frontier” was being mythologized and turned into entertainment before their eyes. Dime novels, the blockbuster popularity of Buffalo Bill Cody’s Wild West Shows, and rodeo competitions like Frontier Days fueled a fascination with cowboy culture that was sweeping the nation.

Aware of this change, people in places like Cheyenne took steps to try and preserve their heritage and profit from outsiders’ curiosity about it. Frontier Days was billed as the “Grand Pageant of the West That Was,” and it served as a stage to revel in this history—at least a white man’s version of it. Locals wanted Frontier Days to push back against this narrative of the taming of the Wild West. Audiences could rest assured that this show, at least, offered “no cheap imitations or sugar coating to sweeten the tongues of the tenderfoot.”

When it came to sporting competition, every cattle roping title since Frontier Days started in 1897 had been won by a Wyoming cowboy. Newspaper coverage of the Hawaiians was a mix of curiosity and thinly veiled condescension. Many people at the time didn’t even know that the Hawaiian Islands had been absorbed into the United States. Whoever these interlopers were, no one really expected them to be actual contenders.

The stands and bleachers of Frontier Park were packed, and cars, carriages, and riders on horseback crowded against the fence. Nobody wanted to miss seeing the “dusky wizards of the rawhide,” as the papers called them. Without giving away the ending, suffice it to say that in 1908, the steer-roping championship left Wyoming.

Upon their return to Hawaii, the paniolo were greeted as heroes. Everywhere they went they were met with cheering crowds, parades, feasts, speeches, even poetry and hula composed in their honor. Their expert performance in Cheyenne came at an important moment in the history of a nation still that was mourning its stolen sovereignty. As the Hawaiian Star newspaper put it: “[N]ow they have seen a man from the Parker Ranch beat all their champions, they will realize that the Hawaiian Islands are something more than a hula platform in the middle of the Pacific.” It was as if all of Hawaii had just said to Washington D.C. and the white men who run it: You may think you own us, but you don’t really own us.