A Declaration of Independence from Hunger

William Lambers is an author who partnered with the UN World Food Program on the book Ending World Hunger. His writings have been published by the NY Times, History News Network and many other media outlets. 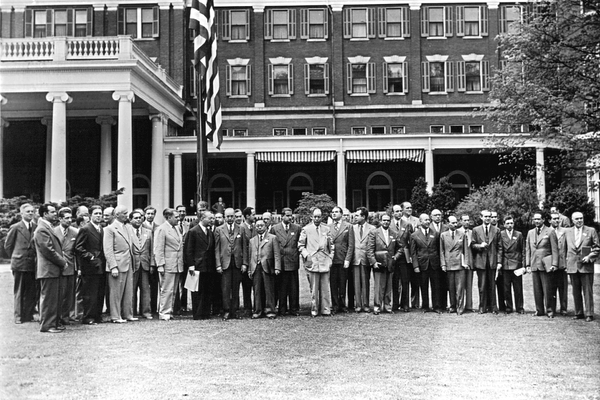 The Homestead at Hot Springs, Virginia, USA, where a UN Food Conference in 1943 laid the foundation for the UN Food and Agriculture Organization. (courtesy FAO)

As we celebrate the Fourth of July, let's remember the greatest line from our Declaration of Independence from Great Britain in 1776: "We hold these truths to be self-evident, that all men are created equal, that they are endowed by their Creator with certain unalienable Rights, that among these are Life, Liberty and the pursuit of Happiness."

These ideals of human rights for all citizens inspire us to end world hunger.  For without basic food and nutrition no person is free to build a life and reach their God given potential.

These essential rights were evident in President Franklin Roosevelt's Four Freedoms speech early in World War II, the third of which was Freedom from Want.

When FDR called for a United Nations Conference on Food during the war, it drew inspiration from the Declaration of Independence, according to Harvard Professor John Black is his book Food Enough.

The delegates stated at Hot Springs, Virginia in 1943: "This Conference, meeting in the midst of the greatest war ever waged, and in full confidence of victory, has considered world problems of food and agriculture and declares its belief that the goal of freedom from want of food, suitable and adequate for the health and strength of all peoples, can be achieved."

While progress has been achieved in fighting world hunger, still too many people go to bed hungry. We must continue to fight hunger at home and abroad.

Americans donating to the Letter Carriers National Stamp Out Hunger food drive in May can feel proud of their efforts to eliminate hunger. Stamp Out Hunger donations were the third highest total ever reaching over 75 million pounds of food. That is 63 million meals donated to America's foodbanks.

Letter Carriers President Fredric Rolando (FVR) says “We are thrilled by the results of this year’s food drive and the impact it will have on helping feed those in need. And we appreciate the generosity and compassion of so many Americans.”

The most donations of any postal branch was San Juan, Puerto Rico, which beat Los Angeles for the top spot. Orlando was third and Florida was the state with the most donations.

When Americans donate to foodbanks it also sends a message to our government to do their part. Congress and the President should support the TEFAP program that helps foodbanks and also the SNAP food stamp safety net for families. The Senate should pass legislation put forth by Senators Sherrod Brown and Kirsten Gillibrand to expand summer feeding.

You never know when trauma can strike and a family will need help putting food on the table.

Charity in fighting hunger may start at home, but it does not end there. Hunger is a major international crisis right now especially with the wars in Syria, Yemen, Afghanistan, and South Sudan. Relief agencies need support in the worst hunger emergencies of our time.

Children suffer the most in the war zones, becoming victims of deadly malnutrition. The new Global Childhood report from Save the Children says "Many children who manage to survive in these fragile and conflict-affected settings suffer from malnutrition. Recent estimates put the number of stunted children living in conflict affected countries between 68 million and 113 million (45 to 75 percent of the global total)."

The child malnutrition crisis is going to get much worse this summer with East Africa facing a major drought. The Congress should increase funding for Food for Peace, McGovern-Dole global school lunches and other aid programs.

As our experiences after World War II taught us, you cannot build peace if there is hunger and chaos.

Food is of the utmost importance to our domestic and foreign policies. Each one of us can do something about it, especially when it comes to helping charities fight hunger. You can support your local foodbank and charities that fight hunger across the globe like the World Food Program, Catholic Relief Services, Mercy Corps, Save the Children, Action Against Hunger, UNICEF and so many others. You can write letters to your representatives in Congress urging them to do more to feed the hungry.

Everyone can be a leader in declaring a new independence: Freedom from hunger for all.