Delightful but Dizzying Romp as the 17th Century Meets the 1950s 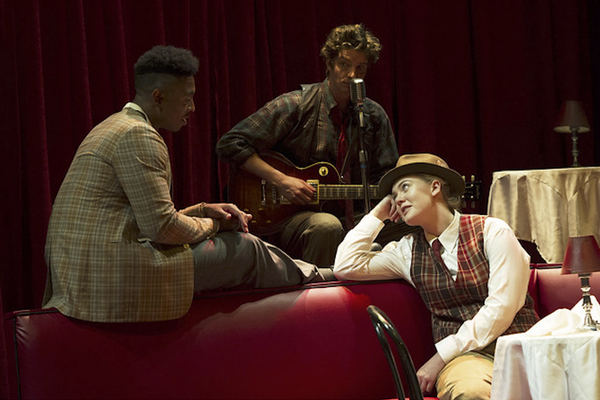 Viola is a lovely young blonde-haired woman washed up on a sandy shore after a shipwreck that took the life of her brother Sebastian. Now alone in the world, and seeking a mate, she disguises herself as a man and goes to work for the wealthy and powerful (and very handsome) Duke Orsino in Illyria. She falls in love with him. The Duke, though, is smitten with Lady Oliva and chases her fervently while Viola chases him. So, you have a man, the Duke, chasing a Lady, Oliva, and a man chasing the Duke. Or is it a woman chasing the Duke? Or is anybody really chasing the Duke? Is everybody chasing him?

There is merriment galore in this new production of William Shakespeare’s play Twelfth Night, that just opened at the Shakespeare & Co. theater in Lenox, Massachusetts in the Berkshires. There is also a bit of dizziness too, as you try to figure out who is who. There are other characters who are trying to help or hinder the romances of this smart trio. They contest against each other and conspire with each other throughout the tale. You need a scorecard.

This production ofTwelfth Night has an unusual setting – a seaside nightclub in the year 1959 to represent, I guess, fun and frolic just before the turbulent 1960s. As you find your seat you are happily bombarded with rock and roll music from 1959, tunes such as Venus, by Frankie Avalon.

All of this makes for an enjoyable night at the theater, but you get lost trying to follow the plot and trying to figure out the motives of all the very odd characters in the story and a lot of hidden wrinkles that should remain hidden – very hidden.

Twelfth Night has been staged in many different ways. It is often set on a ship, as an example, and the sea surrounds the actors. It has been set in different centuries and folks travel by cars, horses and carriages. Here it is the Bard rocking and rolling to the beat of Pink Shoelaces ,by Dodie Stevens, and Rock Around the Clock by Bill Haley and the Comets.

Our heroine, Viola, is really two people, a man and woman. She becomes the sexual object of desire, as a man, for Lady Oliva. Now Oliva is being pursued ardently by a very surprising mystery man. For Viola, wrestling with Oliva throughout the play as a guy and pining for Orsino as a woman (you’ve got to pay attention here), the question is – what to do?

She bumps into a group of men who tell jokes, make sarcastic remarks and sing a lot. They sing original songs written for the play and they, and the audience, listen to a long list of 1950s songs that sometimes have something to do with the play and are a part of this 1601 Dick Clark’s American Bandstand television show.

The pace of the story is faster than the Indianapolis 500 auto race and you have to keep up with three or four subplots at the same time and try, try, try, to find Duke Orsino, who wanders around 1959 like a man in search of an Esso gas station. All of the characters tease and torture poor old Malvolio, one of Shakespeare’s great comic characters, who is wonderful and involved in the hidden sub plot.

Although the plot is a bit mixed up, there are many good thigs to say about this Twelfth Night. Director Allyn Burrows has done a very admirable job of mastering the story and, although unwieldy, keeps the tale moving along and milks every bit of comedy out of it in addition to directing a fine cast of actors. There are wonderful small scenes involving small characters, such the mirthful Sir Andrew and his pals Sir Toby and Feste, who does some fine singing throughout the play. They add some spark to the story.

The director gets really superb work from the cast. Ella Loudon is triumphant as the woman/man Viola. She is on stage for practically the entire play and does yeoman work.  Miles Anderson is just a vision as scampy Malvolio, who has the audience chuckling for the length of the play. Other good performances are turned in by Martin Jason Asprey as the sea captain who rescues Viola from the shipwreck, Bruce Michael Wood as heartthrob Orsino, Steven Barkhimer as Sir Toby, Gregory Boover as Feste, Nigel Gore (marvelous) as Sir Andrew, Deacon Griffin Pressley as the mysterious suitor of Lady Oliva. When Olivas is not shouting too much, she is a welcome addition to the play and portrayed nicely by Cloteale L. Horne. Bella Merlin plays Oliva’s servant and possesses the world’s loudest and longest cackle.

If you see this Twelfth Night, bring a scorecard to keep track of the characters and the plot and be prepared for a long two-and-a-half-hour play. Oh, and bring your dancing shoes. You may not be able to follow Viola, but you certainly can follow the rock and roll songs in the story.