Can You Ever Tame the Shrew? Is She Really the Shrew? 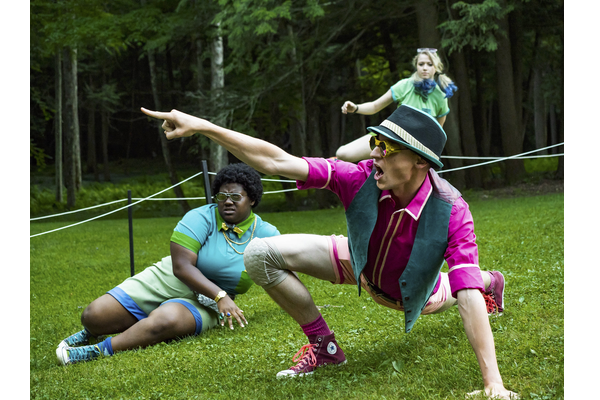 Kate, the bombastic, headstrong.in-your-face daughter of a wealthy merchant there, Baptista, does not believe in those rules and is intent on shattering them. When she is of the age to be married, young Petruchio arrives in town, handsome as anyone can be, and full of good humor, charm and plenty of spunk. He’s the rich heir to his father’s massive fortune.

Kate falls for him, but keeps putting him off to upset the rules makers. There’s no rush, either, because her father has declared that she cannot marry until her younger sister Bianca walks down the aisle, flowers in hand.

Sweet, innocent and very quiet Bianca is pursued by an army of feisty young suitors and meets numerous men and women who are not who they seem to be. Who will marry first? Can Kate stay the shrew? Will old Padua every be the same again?

All of those questions are answered amid the lovely forest and meadows of The Mount, writer Edith Wharton’s sprawling, beautiful estate in Lenox, Massachusetts, where Shakespeare and Co. stages The Taming of the Shrew in an outdoor dell just about every night of the week through August 17.

Director Kelly Galvin has done wonders with the setting. Actors race on to and off the stage from the woods and disappear back into them. Gangs of characters meander under the trees. The forest is large and deep and the meadow wide so there is plenty of room for Galvin to work some magic and she does.

Galvin has given the play a splashy new look. It appears to be set in 2019 and the characters all seem like extras from the Godspell show or college beer blast– all tie-dyed shirts, sneakers and shorts. Baptista, the dad, is his own fashion statement with a light green 1601 meets 2019 suit and lovely pea green hat. He looks like Leonardo de Caprio, too.

The stage in the Dell is a small one, set on boards. It is framed by huge billboards with words like  POW! BUZZ! And O! painted on them in color. It looks like a glossy scene for one of the old Batman television shows (“to the bat cave Robin!}. There is much audience participation in the comedy, too, with large, colorful applause signs raised from time to time that draw boisterous roars from the audience. The audience is frequently encouraged to groan AWWWW at some points in the play and OOOOO at others and it does.

Director Galvin has also livened up the play with several contemporary rock and roll songs, such as Billy Idol’s White Wedding (staged during a wedding in the play).

The director works with a fine cast, too. Particularly good are Nick Nudler as Petruchio, Matthew Macca as dad Baptista, Jordan Marin and Caitlyn Kraft (don’t ask) as Gromio, Devante Owens as Lucentio, Bella Pelz as Bianca, Daniel Light as Hortensio, and Dara Brown as Tranio.

Kirsten Peacock, as the tempestuous Kate, steals the show. She plays her role to the hilt, appearing as brutish woman wrestler at times, ready to body slam someone instead of the comely Milady.

In short, this Taming of the Shrew  is a madcap romp through history, literature and the woods. It is a lot of fun. The theater really encourages people to attend the play, too, heavily advertising it in the Berkshires and slashing ticket prices to just $10.

NOTE – the recurring controversy. The play may have been a frolic in the 1600s, but its message, that it is better to be a docile, subservient wife and not an aggressive shrew who must get her way, has reverberated over the centuries. You would think that the #MeToo movement would be out in full force against this one. The end of the play is particularly sexually savage when the newly wed husbands stage a contest to see which wife is more subservient than the others.

You could re-write the whole play and amend the “shrewishness” and sexism of it, but then it would not be Shakespeare and it would not be literary history. You don’t like the sexism? Frown, grimace and roll your eyes all at the same time.

It’s just a play, and as Shakespeare often said, the play’s the thing.

See this play. It is a first-rate production of a first-rate comedy, full of mirth, tricks, ooos and aaahs, wild clothing, joyous weddings, plenty of rockin’ good music and a bunch of young people doing acrobatics you did not think possible.

Hooray for sneakers, and Shakespeare too.

PRODUCTION: The play is produced by Shakespeare and Co. Sets: Devon Drohan, Costumes: Amie Jay. The play is directed by Kelly Galvin. It runs through August 17.