Reflecting on Patriotism in the Trump Era 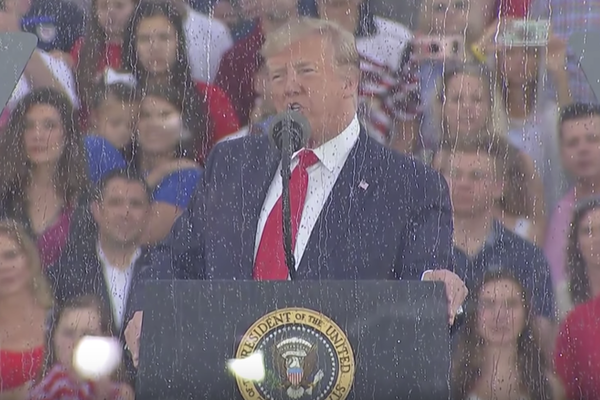 Sometimes these days I am asked what bothers me about the present leadership (or lack of it) that occupies the Oval Office, appoints subordinates, decides if our country will go to war, and proclaims the direction we are all going.  If hesitant, all I have to do is take a look at the columnists on the editorial page of the nearest newspaper.

That President Donald J. Trump is the target of every arrow is nearly inevitable, as there are many different Causes for open hostility. He is enroute to permanently dividing our “united” Country, one I thought headed that happy direction.  In our Congress, Republicans and Democrats seem to have precious little in common.

Men and women in uniform hope these days that the erratic Trump fellow represents only a minority of the “folks back home.”  Meanwhile, it does seem more than likely that almost any unit of professors and teachers will be deeply resentful of the Trumpian use of language on Twitter.

There is bitterness among the competent over cabinet appointments and the handling of foreign relations. Many of us who spent so long fighting our wars do fear a Trump war stirred up almost casually—without thinking. As we try to follow what our president is up to, we discover he is likely to be vacationing. We observers feel that our hotel and golf course magnet only has one foot in “governing.”

Let’s admit it: the 4th of July that just passed became something of a strain midway when our erratic President  did much as he pleased. Predominating was showmanship.  It seems true enough that children and the military minded admittedly did seem to get a real “bang” out of watching those nine overflights in formation.

As we celebrated our nation’s birthday, many of us reflected on our shared history and our future. All that time we existed as the United States of America; all those wars and battles we can’t forget.  The heroism that we acknowledge without reservation. Yes, a lot of us did want to commemorate the 4th of July. Did we want it to become a Trumpian holiday?

We found ourselves detouring as we tried “celebrating” as well as “commemorating” the dead and dying in the aftermath of War.  Our White House occupant clearly got in the way! The holiday was imperfect for some of us. I was at least was a bit sorry for Donald as the rain trapped him in his apparently bullet-proof square glass cage where the prepared text had to be given, no matter what.

Patriotic holidays are decidedly a time for looking back with pride. Always, we center our attention on “our military,” even though there are an endless number of administrative units who have served usefully and faithfully over the decades.

That brings up several new subjects for worry and concern.  Will our intelligence services do their highly essential job under that inexperiencedpresident? That’s not all.  How in the world is William Pendley, long-critical of the Bureau of Land Management going to manage once in charge? Out here, the BLM controls vast square miles of land. It stands for “conservation.”  Pendley apparently favors wholesale drilling for oil on the BLM acres—we shutter.

And yet, there is much to be proud of. We did win Independence, preserve our new capital after 1812, and expand to the Pacific after waging war briefly with Mexico to end up with West Texas, New Mexico, Arizona, and California! That bloody Civil War early in the 1860s proved so costly (there were over six hundred thousand casualties). In the years after Lee surrendered, many of those who fought and survived came to ponder if the former slave was as “free” as had been hoped. The memory at the time was of bravery on both sides, in any case! But as time passed, that Reconstruction Era proved a disappointment, for sure. A New South gradually arrived, but not in every county.

As the Indians were forced onto Reservations, they and sensitive observers hoped for a better outcome, somewhere down the line.  After all, the natives were being displaced (to put it gently), and results were by no means universally approved. Fighting Spain, we did manage to bring a form of freedom to Cuba and the Philippines, but taking the long view offers only diluted celebration.

World War I brought celebration to our streets but also division as our homegrown Germans fumed. The era also brought women’s right to vote and Prohibition. With massive World War II we came to  appreciate fully what the American military is able to do under terrible pressure. Hitler, Mussolini, Tojo and dedicated Japanese, all surrendered as we and our sacrificing Allies in two wars brought the right side to its final triumph.  The path to sudden victory at the very end (in August, 1945) revealed a tool of war all hope to be avoided if there is a “next time.”

We took on northern Korea, then  apparently with no plans to do so, we fought intervening China.  It was cold and there was plenty of discouragement.  South Korea today looks good to most observers. (Except, oddly, to our President, who clearly  isn’t sure! One could almost accuse him of partisanship toward that awful North Korea.) The Republic of China is another entity over which we can show pride—although we didn’t quite fight a war (not yet, anyway)  for that independent state.

Any pride mainlanders have felt for interacting with Puerto Rico has been pretty much shelved in today’s time of post-storm neglect. There is turmoil, as one writes, and something drastic must be done. Lots of us hope our deteriorating national government will take on this neglected island as a project very soon now.

Far on our periphery we are in an uproar over our Federal Government's conduct on the southern border. There is disrespect for family as an entity and cruel treatment of children who deserve Care.

Meanwhile, we do realize that partly due to our Vietnam effort  nearly all of South Asia ended up safe from Communism as the last century ended.  It isn’t put that way very often—though President Reagan ventured to say “noble” when considering everything overall. (Maybe fighting Saigon helped, a little, in the overall region.) But almost all admit these days that our massive South Vietnam effort didn’t come to the kind of conclusion this sometimes war-making state likes to see.

Our Nation cherishes victories and deplores defeats—not surprisingly. We prefer to feel something like content with the outcome when the flags are packed away!  That Vietnam War with its humiliating end in 1975 is hard to reconsider….

Grenada and Panama don’t begin to make up for that ghastly exit from south Asia in 1975; not close.  In a few decades Kuwait was a small war won, but Iraq has attracted few to cheer.  Using our weapons in Afghanistan has not brought much cheer (except maybe over at those National Guard buildings).  Those casualties do not help in such places.

Thoughtful Americans are in an uproar as our Nation’s “leadership” seems willing to embark on an unsought, unthought, sudden New War.  Fight Iran? Why in the hell? Will they start it by attacking our carrier force? Or attack the British instead? Is that Oval Office seeking a war to divert us?  From what?  From all the administrators who quit or were jailed, or proved incompetent?

Wars worth “celebrating” are not easily come by, are they?  Between memories of the dead and the wounded, sad analyses of how causes did and didn’t work out, and frustrated hopes as  expectations get compared with results, we do have to think, consider, reflect, yes, and avoid much better--don’t we?

At the outset of this essay I expressed giant unease about the state of our good Country as led by one who continues to act, repeatedly, as one out in the hustings, campaigning.  He spends every weekend at purely political rallies.

Nonetheless, looking back to the recent July 4th remembrance, we did commemorate another historic Independence Day first class. It was easy, as always, wasn’t it,  to find  a whole lot to remember and to celebrate enroute?  It seems clear that the problem we faced as we tried to be “patriotic” was that we do not respect or even trust our presidential leadership.  We, most of us anyway, want New Leadership.

But:  let’s put our heads together before July 4th, 2020.  We do like tapping our feet cheerfully to that patriotic band music—yes, we do. But let’s make sure our Land stays at peace.  Most of all, we will not be bypassing this or any other patriotic holiday.  All of us with the label “American” want to participate with unmitigated, patriotic enthusiasm at times when loyalty to Country is appropriate.

If we must, we can commemorate July 4th this coming year in spite of who occupies that Pennsylvania Avenue address.  But it would be so nice if we could somehow be free of that odd figure by then.  We do want to be able to concentrate on a United States of America that is still proud to be the home of every one of us!