Martin Halpern is a professor emeritus of history, Henderson State University, and the author of UAW Politics in the Cold War Era and Unions, Radicals, and Democratic Presidents: Seeking Social Change in the Twentieth Century. He is completing a manuscript entitled, “Emma, Maury, and the San Antonio 1939 Municipal Auditorium Riot.”  He can be reached at halpern@hsu.edu. 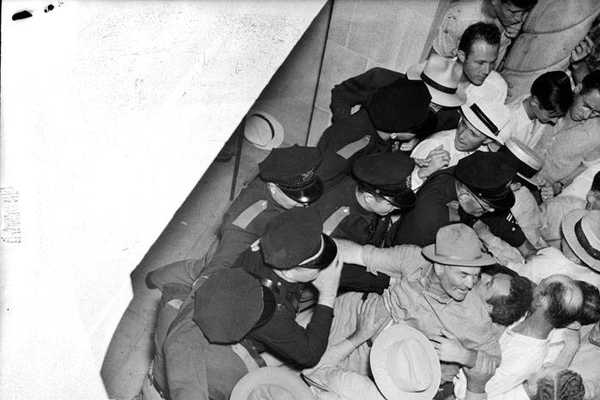 Words have power. When Donald Trump expresses his hostility to minority groups, women, immigrants, and political opponents, his words mobilize those with similar feelings to act. The actions may include expressing angry sentiments verbally, attending a rally, or committing violent acts.

Provoking violent outbursts is nothing new. Eighty years ago this week, on August 25, 1939, five to ten thousand people rioted at the San Antonio Municipal Auditorium to prevent the Communist Party from holding a public meeting. The rioters targeted not only the Communists and their leader, Emma Tenayuca, but also recently elected Mayor Maury Maverick, whose administration had granted a permit for the gathering.

The efforts of police and fire fighters to protect the meeting failed. The rioters broke the windows in the building’s west wing, forcing Communists and others in attendance to flee the building. Aided by two plainclothes police officers, Tenayuca escaped unharmed. After rioters entered the building, they ripped up curtains and seats, held a meeting, marched through downtown San Antonio, and rallied at the Alamo. Some rioters sought, without success, to find Maverick at his home while others hanged the mayor in effigy at City Hall.

What took five to ten thousand people to the auditorium? The opposition to the Communist meeting of veterans, civic, and religious groups and publicity given these protests created the conditions that led to the riot. The riot was an organized region-wide affair. The crowd included many onlookers as well as a large group of violent rioters and their supporters. Historian Julia Kirk Blackwelder commented: “The violence that greeted Emma Tenayuca . . . not only was indicative of San Antonio’s virulent anticommunism but also reflected basic antagonism toward the city’s poorest Hispanic workers.”

Who provoked the riot?

The most important individual protesting the granting of a permit for the Communist meeting was Catholic Archbishop Arthur Drossaerts. At the time of the 1938 pecan strike by thousands of Mexican Americans/Mexicans, especially women, Drossaerts had supported police repression. He argued that “the poor Mexican peon if left alone is a patient, long-suffering individual. But if excited his Indian blood takes the upper hand and he may be turned into a demon.” In opposing the permit for a Communist meeting, Drossaerts commented: “Our people may wonder if our city authorities, in renting the Municipal Auditorium to that persistent propagandist of Communism, Emma Tenayuca, have forgotten that self-preservation is after all the first law of nature.” Characterizing Communism as an “awful Asiatic plague menacing our country, its liberty, its institutions.” Drossaerts exclaimed, “Let a universal protest be sent up at once . . . that the Trojan horse be kept out of the city auditorium forever.”

B.F. Harris of the San Antonio Americanism committee of the Veterans of Foreign Wars asserted that “veterans concede the right of free speech to Communists as well as to anybody,” but the Municipal Auditorium had been designated as a “Veterans Memorial Building.” Thus it was not the place for “any kind of meeting by those who are opposed to American democracy for which our veterans gave their lives.”

Joining in protesting the renting of the city facility to the Communist Party were the Baptist Pastors Conference, chapters of the American Legion and the Disabled War Veterans, a meeting of fifty veterans from several groups in Bexar County, the Knights of Columbus, the Junior Chamber of Commerce, the AFL Trades Council, the AFL Building Trades Council, the Council of Protestant Women, the Catholic Daughters of America, the Saint Anthony Society, the San Antonio Ku Klux Klan, the Texas Pioneers, the Exchange Club, and the League of Loyal Americans.

The Bexar County Commissioners on August 11, 1939, unanimously adopted a resolution that claimed that Communism was a “plague that destroys the Church of God, the sanctity of the home, the liberties of man, and every quality of Christian civilization that elevates man from brute barbarism.”

Maverick held firm against the pressure to rescind the permit. The mayor cited the Bill of Rights’ guarantees of freedom of speech and freedom of assembly, the recent Supreme Court decision rebuking Mayor Hague of Jersey City for “denying permits under precisely the same circumstances,” and the American Bar Association’s brief in the latter case. Maverick declared, “no amount of pressure will force me to violate my oath to support the constitution nor force me to fail to carry out the principles of democracy.”

Who were the targets?

The principal leader of the Communist Party in San Antonio was twenty-two year old Emma Tenayuca, who had been leading massive protests by members of the Workers Alliance for jobs and relief since 1936. In 1938 she was a key leader of the successful strike of pecan shellers, the lowest paid workers in the city. The CIO Pecan Shellers Union Local 172 became a force in the community. The majority of those attending the Communist meeting were Mexican Americans/Mexicans, the most impoverished group in the city. Mexican Americans/Mexicans were over one third of the city’s population but had no political power.

Maverick was a nationally prominent pro-CIO New Dealer member of Congress. He had opposed police repression of both the Workers Alliance and the pecan shellers. In the House of Representatives, he had led an influential multi-party pro-New Deal bloc known as the Progressive Open Forum Discussion group. Maverick lost his congressional seat due to his defeat in the 1938 Democratic primary by Paul Kilday, the candidate of San Antonio’s long-established conservative political machine.  Maverick made a comeback in May 1939, winning election as mayor and gaining a majority on the city council for the local Fusion Party.

Newspaper commentary on the riot was largely hostile to the rioters. Many commentators made anti-Communist remarks, however, and saw Maverick’s liberal “pinkish” politics as partly or largely to blame. Empowered by the riot, Maverick’s opponents sought to drive him from office. They held mass meetings and signed petitions to recall him. The recall effort ultimately failed, as did criminal and civil prosecutions of the mayor. Maverick’s tenure as mayor, meanwhile, included significant accomplishments including improvements in health and housing. He failed to win reelection in 1941.  During World War II, he held administrative posts with the Roosevelt Administration. Although he departed from his consistent civil libertarianism in 1940, he opposed the post-World War II red scare.

As charismatic leader of San Antonio’s Workers Alliance, honorary chair of the pecan strike, and the public face of the Communist Party in the city, Tenayuca was subject to constant pressure and was blacklisted in San Antonio. She continued organizing in Texas for a time but moved to California in 1945. Other Communists were able to remain in the city and continue political activity. Although Tenayuca dropped out of the Communist Party in1946, she remained a life-long radical intellectual. When she returned to San Antonio in 1968, she taught reading until her retirement. Scholars and journalists interviewed her often in the last two decades of her life.

The words of the Catholic archbishop, veterans’ organizations, and officials allied with San Antonio’s political machine were given effective publicity by the city’s English-language newspapers. Anti-communist organizations from near and far mobilized members to participate in what became a violent riot.

Historian John Weber has argued, “Emma Tenayuca . . . became the individual most associated with . . . efforts to shift the balance of power away from the region’s employers. . . . rioters were not driven by hunger or poverty. . . but by a reactionary desire to halt efforts to change the nature of political and economic control is South Texas.”

The San Antonio rioters of 1939 succeeded in stopping a Communist meeting, weakening Maverick’s hold on the mayoralty, and slowing Mexican Americans/Mexicans’ drive for inclusion in San Antonio’s economy and polity. Their victory lasted many years but ultimately proved temporary. Mexican Americans/Mexicans eventually gained political power in San Antonio. Emma Tenayuca returned from exile in California to be honored by Chicana/o and women’s organizations in Texas. Her 1999 funeral took place in the San Fernando Cathedral, the oldest church in the city and the center of the San Antonio archdiocese. Among the offered gifts was “a simple basket of pecans,” a symbol of the mass movement she led in the 1930s.