Chocolate and the History Behind Historical Fiction

Karen Brooks is the author of nine novels, an academic, a newspaper columnist and social commentator and has appeared regularly on national TV and radio in her native Australia. Before turning to academia, she was an army officer, and dabbled in acting. She lives in Hobart, Tasmania. 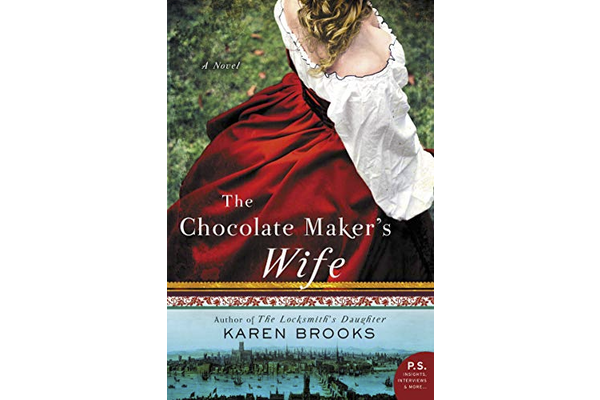 One of the great pleasures of writing historical fiction is undertaking the research. Reading books, drama, poetry and a range of other documents written in or about the era by historians, academics, novelists, journalists, playwrights, and even those from the legal profession, help a writer bring a period to life. So does travel. I adore the research and, in many ways, find it difficult to stop and simply start writing!

The events in my latest novel, The Chocolate Maker’s Wife, take place between 1662-1667, a time in British and indeed, world history, that saw huge changes to society. Trade boomed and the exploration, colonisation and exploitation of other cultures was unprecedented. There was religious and political turmoil.  England saw the return of an exiled king, Charles II who heralded a time of decadence and hedonism. Termed the Restoration, Charles’ reign also saw a rise in literacy, the arts, women’s rights, trade, and so many scientific and other marvels. But there was also, in those early years of his governance, internal religious conflict, war, and the tragedy of the Great Plague followed closely by the Great Fire in which three-quarters of London burned.

While I used every kind of resource and the events they covered when writing The Chocolate Maker’s Wife, the greatest source I used was actually a diary. The diary of one Master Samuel Pepys, someone who between the years 1660-1670, kept an almost daily record of his life. Having access both in print form and online to Mr Pepy’s diary meant I read intimate facts about the funny, portly little naval clerk’s various relationships with everyone from his wife, Elizabeth, to his servants, peers, the court and even the king. I also learned about the weather, conditions within the city and outside its limits, what plays were being performed, the impact of the plague and Great Fire, gossip, politics, war and commerce. As a consequence, I was able to not only use Mr Pepys’ observations about life and the struggles and triumphs he and those close to him endured and enjoyed, but I learned about him. There’s not much Mr Pepys doesn’t reveal. At first, reading his diary was akin to eavesdropping. But, after a while, I began to feel like a friend to whom he was confessing his secrets – not all of them palatable! The result was, I felt I knew Samuel Pepys and it seemed churlish not to honor his memory by including him as a character in the novel.

Of course, Sam’s diary was where I encountered the much-touted beverage being introduced to Londoners: chocolate. It wasn’t the first time I’d heard of it. In 2014, I was in England doing some on the ground research for my earlier novels, The Brewer’s Tale and The Locksmith’s Daughter. I’d travelled out to Hampton Court to consolidate my sense of Elizabethan England (the era in which The Locksmith’s Daughter is set). Lo and behold, as I was wandering about its magnificent cloisters and gardens, I saw directions to a Chocolate Room and Chocolate Kitchen. Believing these were somewhat anachronistic (after all, what did chocolate have to do with British history?), I assumed it was for the benefit of modern tourists and was inclined to disregard them. My inclinations were further cemented when I saw an enormous queue snaking out of the Chocolate Room where, a sign proclaimed, “free samples”. I walked past (craning my neck) and, in the process, almost missed another room further down the hall which had no visitors and attracted no interest – except mine.

This room – well, more a largish space cordoned by a rope – was the “Chocolate Kitchen.” Filled with shiny pots, pans and ladles as well as a range of pretty porcelain dishes and furniture, it was the portrait on the opposite wall that caught my eye. It was of a rather homely-looking woman named Grace Tosier. She had a bunch of flowers tucked into her décolletage and sported a floppy hat. According to the information, she was the wife of the king’s (William) designated chocolate maker, Thomas Tosier. It turns out, Grace entered the profession too and opened a Chocolate House in Greenwich which became renowned for what went on behind its doors – that, and the chocolate drink she served.

My imagination was fired. A woman and chocolate! And it was a drink!

My research began soon after and I learned not only that chocolate was a rich, spicy, often gritty and even bitter drink imported from Spain and France via South America, but it began life in London with a reputation. Purported to be an aphrodisiac as well as a panacea for just about every ill, it was also associated with the growing slave trade in not only South America, but Africa as well. Chocolate, while being consumed by an increasingly sober and literate English society, had a dark and abusive history. Many suffered for chocolate.This story was so compelling, I decided to write about how chocolate first came to London and its public reception, including the changes it wrought socially and culturally.

Chocolate Houses began to spring up in London in the early 1660s. They were places where men could go to quaff the new-fangled drink, discuss business, politics, read the freshly-printed news-sheets and exchange views. Trade was conducted, auctions as well. Side by side with the already popular Coffee Houses, the fate of powerful individuals, monarchs, governments and so much more was decided over a bowl of chocolate and/or coffee.  Women, however, were excluded from these spaces.

You can imagine how intriguing this was. I began to think, what if a woman’s talent for making chocolate allowed her entrée and access to this man’s world? What if she stood as a symbol for the incredible and sweeping social changes London and the world were undergoing – the rise in literacy, human rights, and the accumulation of knowledge? Out of the melange of ideas, my heroine, the kind, resilient and beautiful, Rosamund Tomkins was born.

Those who come into her orbit are also based on, if not on real characters (though there are many of those as well), then the type of people that flourished or failed in those times. There are greedy and astute businessmen, daring and sycophantic journalists, printers, publishers, those spouting propaganda and those exploding it. There are also two slaves – Jacopo and Bianca. Dehumanised by the conditions that brought them to England, in Rosamund’s sphere, they’re given their humanity once more and in doing so, help Rosamund in ways no one could have foreseen. The book is also populated with historical figures – from King Charles II and his demanding mistress, to his spymaster, other famous nobles, scientists, poets, and philosophers, to real printers, polemicists, radicals, thieves, navigators, the Tosiers, other genuine chocolate and coffee makers and producers, and so many more.

Hovering around all these characters – real and imagined – is Samuel Pepys. The man who left the world the legacy of his marvellously gossipy, fact-filled, observant and private diaries and, in doing so, gifted us insights into an era we might never have otherwise possessed. He also helped me bring to life The Chocolate Maker’s Wife and for that, I’m forever grateful.