How The Media Covered Woodstock – and How Woodstock Changed The Media 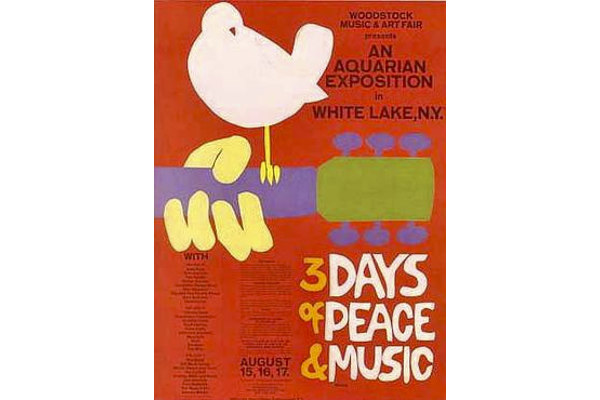 Initial media coverage of the Woodstock concert portrayed the event as a disaster in the making. However, a young generation of reporters saw the event differently. Harlan Lebo, author of 100 Days: How Four Events in 1969 Shaped America (Amazon, Barnes & Noble), describes how coverage of Woodstock set a tone for reappraising American perceptions of young people in the 1960s. This is the second in a two part series on Woodstock. Click here to read the first.

As the last stragglers from Woodstock drifting back to their normal routines on the third Monday in August 1969, reporters and editors in newsrooms across America struggled to characterize the era-changing events that had occurred over the weekend.

At the offices of The New York Times, the mood was highly-charged, with the staff and editors divided by the same types of conflicts Americans at large were experiencing in the wake of cultural change.

Over the weekend, most of America’s newspapers – drawing on articles written by national wire services – had covered Woodstock by focusing on the disaster angle, with sprinklings of drug overdoses and mud thrown in. Typical of the headlines was the banner across the top of the New York Daily News on Saturday morning: “Traffic Uptight at Hippiefest.” A caption for a photo that showed a choked road began “Go-Go Is a No-No.”

Perhaps the most flagrant of these stories was the report distributed across the country by United Press International (UPI), which covered the story entirely in a negative light by focusing on the “mud, sickness, and thousands of drug overdoses.” UPI quoted “one far-out music lover” as saying, “I don’t know, man – this thing is just one bad trip.”

Reporters from theTimes who were at Woodstock knew better. Writer Barney Collier fought by phone with the news desk to cover the event as an evolving cultural milestone.

“To me, it looked like an amazingly well-behaved bunch of folks,” Collier recalled in 2009.  “Every major Times editor up to and including executive editor James Reston insisted that the tenor of the story must be a social catastrophe in the making.

“I had to resort to refusing to write the story unless it reflected to a great extent my on-the-scene conviction that ‘peace’ and ‘love’ was the actual emphasis, not the preconceived opinions of Manhattan-bound editors.

“This caused a big furor at The Times in New York,” Collier recalled. “And this eventually went up to Reston. He said, ‘if that’s the way Barney sees it, that’s the way we’ll write it.’ Collier’s article ran as the lead story on page one of the Sunday Times, and was picked up by other papers across the country.

“Despite massive traffic jams, drenching rain storms, and shortages of food, water, and medical facilities, young people swarmed over this rural area today for the Woodstock Music and Art Fair,” Collier wrote.  “The young people came in droves, camping in the woods, romping in the mud, talking, smoking, and listening to the music.”

To Collier, “that was probably the most important thing I did – to get it to be seen as it was, rather than the preconceptions of a lot of editors back on the desks. After the first day’sTimes story appeared on page one, the event was widely recognized for the amazing and beautiful accident it was.”

Conflict on the editorial page

But Collier and other New York Times writers who had covered the event had no control over the editorials that appeared in the paper.

That Monday, in a staff editorial titled, “Nightmare in the Catskills,” the Times editors – none of whom had first-hand knowledge of what had occurred in Bethel – blistered the Woodstock Festival.

“The dreams of marijuana and rock music that drew 300,000 fans and hippies to the Catskills had little more sanity than the impulses that drive the lemmings to march to their deaths in the sea,” the Times’ editors pontificated. “What kind of culture is it that can produce so colossal a mess?”

Reporters at the Times rebelled against the editorial, some reportedly threatening to quit if the paper did not revise its view. And incredibly, the Times did something rare for the paper: it recanted – reluctantly.

On Tuesday, August 19, the editors ran a second editorial – this one entitled “Morning After at Bethel,” which toned down the rhetoric from the day before and offered a somewhat more thoughtful appraisal.

“Now that Bethel [New York] has shrunk back to the dimensions of a Catskill village,” the editorial began, “and most of the 300,000 young people who made it a ‘scene’ have returned to their homes, the rock festival begins to take on the quality of a social phenomenon.”

The attendees endured the discomforts, the Times wrote, “to enjoy their own society, free to exult in a life style that is its own declaration of independence.”

While newspapers across the country continued to focus on the concert-as-disaster-area and “hippiefest” in their coverage during the weekend, network television news programs were quick to pick up on the message of Woodstock. At that time, the media with the broadest reach – some 20 million households nightly – were the half-hour evening news shows aired by ABC, CBS, and NBC.

Each network had a crew at the concert site on August 18 to wrap up the coverage. While the reporting touched on the logistical problems over the weekend, the correspondents– each with experience covering youth and the issues of the ‘60s – focused most of their attention on the message of Woodstock.

“This weekend says a lot about the youth of America,” said Lem Tucker from NBC, standing near the stage surrounded by a sea of refuse. “More than 350,000 people came looking for peace and music. Many said they learned a lot about themselves, and learned a lot about getting along together, and priorities. And for most, that alone makes it all worthwhile.”

On the CBS Evening News with Walter Cronkite, reporter John Laurence delivered a commentary that looked past the drugs and the traffic.

“What happened this weekend may have been more than an uncontrolled outpouring of hip young people,” said Laurence. “What happened was that hundreds of thousands of kids invaded a rural resort area totally unprepared to accommodate them, among adults who reject their youthful style of life. And that somehow, by nature of old-fashioned kindness and caring, both groups came together, in harmony and good humor, and all of them learned from the experience.”

Laurence described Woodstock as “a revelation in human understanding.” The local – and older – eyewitnesses, Laurence explained, “had not been aware, as the kids are, of the gentle nature of kids to one another. These long-haired, mostly-white kids in their blue jeans and sandals, were no wide-eyed anarchists looking for trouble.

“So what was learned was not that hundreds of thousands of people can paralyze an area…but that in an emergency at least, people of all ages are capable of compassion,” concluded Laurence. “And while such a spectacle may never happen again, it has recorded the growing proportions of this youthful culture in the mind of adult America.”

The realities of change

How would media coverage of youth culture change after Woodstock?

To Ken Paulson – in 1969 a fifteen-year-old fledgling music writer who four decades later would become editor of USA Today– the reporting on Woodstock and the internal strife it produced at The New York Times were vivid examples of the disconnection at many media outlets that would continue to fester in their coverage of youth culture in America.

“The news media didn't know how to cover a cultural event like Woodstock, and they had no appreciation of the art involved,” Paulson said. “This was no surprise. Newspapers across the country were staffed with people who grew up on Elvis, and it is a giant leap from Elvis to The Who.”

This lack of appreciation says much about thoughtful discussions of news coveragein the 1960s, but speaks even louder about the financial needs that were emerging for media in that era. During the 1960s, news organizations had to court the emerging baby boomers – a generation strong in numbers and in buying power– but not without significant challenges.

“Media slowly began to realize that they needed younger readers to buy their publications and buy from their advertisers,” said Paulson. “But most aspects of counterculture– such as alternative lifestyles and social protest – just didn't lend themselves to advertising revenue or support for general-interest publications.

One method to reach that growing audience was through coverage of music, which created opportunities for a new, more diverse generation of reporters.

“Music coverage was the most visible form reflecting the culture at the time,” Paulson said.  “Woodstock inspired a reexamination among the nation's news media about how they cover these events – and without appearing to be totally out of touch.”

“As a result, in the early seventies, major publications hired young people who could write about young people's music, as well as film.”

This lack of awareness of the contemporary scene among mainstream media outlets continues to shape coverage.

“It's not unusual for news organizations to be clueless about emerging cultural developments,” Paulson said, “especially when it involves the art of young people." “I think the gap has intensified now – it’s just taken different forms today,” Paulson said. “For instance, it’s very difficult for mainstream news organizations to understand rap, or to truly appreciate hip hop.”

So although that gap has lingered in the fifty years since the summer of 1969, Woodstock was nevertheless a milestone – not just in coverage of the music scene, but also in broader media exploration of social and economic issues that affect younger audiences. After the Woodstock weekend, rock music and other topics concerning young people in the American experience were no longer oddities. It was clear that the future had arrived, when for three days, 400,000 people were part of an instant city that defined its own culture.

“Suddenly,” Said Collier, “we began to realize that we were coming into a different world.”

“Over the last few days we’ve had a glimpse of our future,” Smithtold his viewers, “and this is what it looked like.”