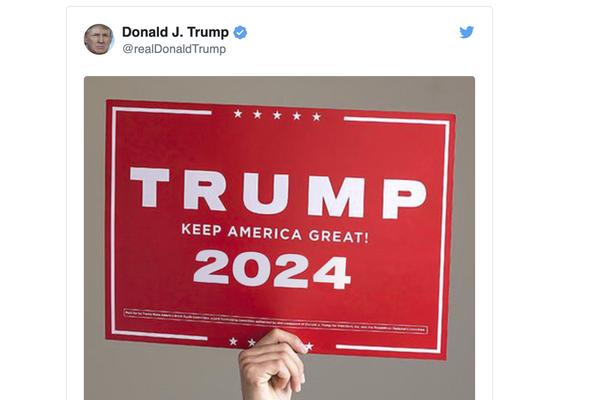 In a view shared by many, it is easy to believe that what Donald Trump really wants is not to be president of the country, but dictator of it.

Indeed, he has suggested how good it might be for him to enjoy a third term, perhaps more, even though the Constitution forcefully forbids it.

In a Fathers Day tweet he fantasized over the possibility, suggesting the public might “demand” that he serve a third term. The [good news], he wrote, “is that at the end of six years, after America has been made GREAT again and I leave the beautiful White House  (do you think the people would demand that I stay longer? KEEP AMERICA GREAT)….”

After Chinese president Xi Jingping abolished term limits in his own country, Trump said he liked the sound of that. “President for life. No, he’s great. And look, he was able to do that. I think it’s great. Maybe we’ll have give that a shot some day.” Just joking? It is not all that laughable. [The quotes in these two paragraphs are from an article by Gabrielle Bruney in Esquire, July 16, 2019. They have also appeared in the New York Times and Washington Post.]

So what does a wannabe dictator who wants to give that a shot some day have to do day-by-day to reach his miserable goal? And how is Trump measuring up?

It is not an easy jump from democracy to dictatorship in our country. There is that dratted Constitution in the way. There are laws to be violated. There are critics, opponents, Democrats, immigrants, and the unfaithful to be purged.There is the critical mainstream media to be done away with. There are many lies to be told. It is hard, nasty work and Trump is fast running out of time.

A dictator must as soon as possible, by any means, shut down the media or control it. No dictatorship can exist in the presence of a free press. So far Trump has only been able to call the media names—"the fake news media,” “the enemy of the people,” “the opposition party.” From the time of announcing his candidacy to the end of his second year in office he had tweeted 5,400 times. Some 1,339 of those tweets were attacks of some kind on the media or individual reporters. This doesn’t count the times he has harangued the media in his speeches. He has turned many of his supporters into media haters like himself.

He is particularly incensed by the Washington Post and the New York Times, both of them highly critical of him. He has said that in the event that the public did demand  that he stay, “both of these horrible papers will quickly go out of business & be forever gone!”

A dictator must be an avid hater of some minority group and wanting to purge it. Trump hates Muslims. He is not too crazy about blacks and Hispanics either. But there are now many of them, a very tall purging job. On the other side of this coin, Trump seems in no mind to purge white supremacists, who love him as one of their own.

A dictator must tell lies, lots of lies. Trump is far and away the champion liar in presidential history. It is said by news outlets who keep track of such things, that Trump averages about six lies per day.

A dictator must be willing to exterminate people, lots of people. Since this is forbidden in a democracy, Trump can only slander them with a tweet or in a speech or fire them. In a successful dictatorship you just shoot anybody you want any time you want. Trump can only fire them, or tweet insults at them. But it is not a far jump to think of Trump’s firings and insults as symbolic exterminations. Nor is it a far leap to think of the would-be immigrants pinned up and families separated on our southern border as concentration camps.

A dictator often has an affinity with other established dictators. Trump admires and is on friendly footing with two elite of the world’s dictators—Vladimir Putin of the Soviet Union and Kim Jong-Un of North Korea. He has met and spoken kindly of both. And there is that admiration of  China’s Xi Jinping for making himself president for life.

A dictator is narcissistic, in love with himself and glory seeking, demanding and getting total obedience and acclamation from his followers. In his first cabinet meeting Trump invited each member to praise and celebrate his greatness. He loves his many rallies out in the country, where he basks in the acclamation of his many avid followers, which are said to be a strong third of the country’s population.

A dictator is lawless, often pushing the limits of his power. Breaking a law seems meaningless to Trump. Whether intentionally or ignorantly, he has violated a host of laws, many later challenged or overturned by the courts, thwarted by the judiciary. That is why it is so important for Trump and the Republican Party to appoint sympathetic judges to as many courts as possible. As for the Constitution, it can perhaps be questioned whether he has ever read it, much less  whether he worries about violating it.

A dictator questions the legitimacy of his opponents, demonizing them and curtailing or abolishing their rights. In the 2016 campaign for president, Trump suggested he might not accept the legitimacy of his opponent, Hillary Clinton, if she won the election, and suggested several times that she ought to be thrown in prison. He has tweeted hatred of many of his detractors and has encouraged brutality against anti-Trump demonstrators at his rallies.

As a wannabe dictator in training he has been doing reasonably well.