1949: A Crucial Year for America, Russia, China and the World 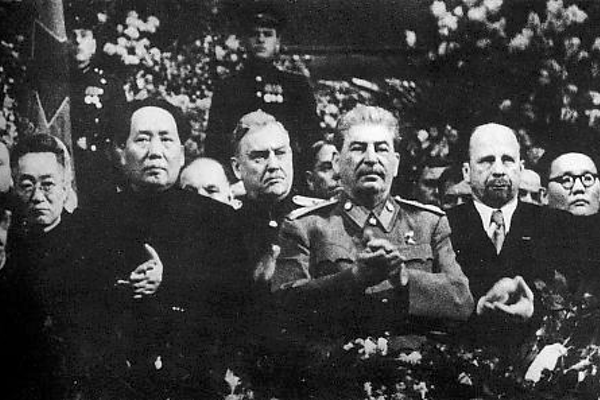 Recently, I attended a birthday party for my nephew who was born in the year 1949. Reflecting on the year of his birth, I was struck by how significant the year 1949 was in American, Russian and Chinese history. It’s valuable to revisit three events of global importance from 70 years ago and reflect on how global events intertwine with personal histories. Three events of global importance came to mind.

First, on April 4, 1949, in Washington, D.C., the United States joined Canada and ten other European countries in forming—for better or worse-- the North Atlantic Treaty Organization (NATO). This was a military alliance against the Soviet Union whose purpose was to thwart a presumed invasion of Western Europe by Russia.

For the first time in American History, the U.S., going against the advice of George Washington and Thomas Jefferson, joined a “permanent” and “entangling” military alliance. As a result, U.S. troops would be permanently stationed in Europe during peace time—also a first in American history

One of the members of NATO was Turkey. The ultimate result of this for both me and my nephew was that in 1972 we both lived in Turkey. He was in the U.S. Air-Force and stationed at its base in Adana, Turkey. At the same time, I was living in Istanbul and taught U.S. Foreign Policy for the University of Maryland on a Turkish army base twenty miles west of Istanbul and on a U.S. Air Station at Karamursel, Turkey located on the Southern Shore of the Sea of Marmara.

Second, in mid-August 1949, the Soviet Union exploded its first Atomic bomb. America’s nuclear monopoly, lasting for four years after the bombings of  Hiroshima and Nagasaki, ended. The U.S. and the Soviet Union now increased their nuclear stockpiles. The era of MAD (Mutually Insured Destruction) now began.

This came to a climax during those frightening “thirteen days” in October 1962 called the Cuban Missile crisis. Then, both Moscow and Washington peered into the horrifying abyss of total mutual annihilation. Fortunately, they both stepped back before going over this tragic cliff. The solution to this crisis was basically settled when President John F. Kennedy secretly agreed to pull U.S. atomic missiles out of Turkey.

At the time, I was an undergraduate student and did not fully appreciate the danger the world was in then in. The full sense of the vulnerability of the human species did not strike home to me until I began teaching classes on the subject starting in 1986 and continued to do so for the next twenty years.

Third, on October 1, 1949, Chairman of the Chinese Communist Party, Mao Tse Tung, stood on a balcony over-looking the Gate of Heavenly Peace and Tiananmen Square in Beijing and announced the entry of the People’s Republic of China into international affairs. All of Asia and the West would never be the same again.

After this announcement, Mao proclaimed “China has stood up.” In saying this, Mao reminded his fellow citizens about China’s “Century of Humiliation” (1842-1949) suffered at the hand of Western nations and Japan. Events that happened to China during this time are seared in the historical consciousness of the Chinese people.

If one looks at China’s present place in global affairs, it is readily apparent that, seventy years after Mao made this statement, China is, indeed, standing up. It is no exaggeration that China is standing tall and the economic and political shadow it casts across the globe is astounding.  Today, for the first time since the reign of King George III of England in the 18thcentury, the U.S. and the West is being seriously challenged by a non-Western, non-Christian and non-white Civilization.

The time is not far off, that China may quite be standing taller, economically, than the U.S. President Barack Obama once referred to Sino-American relations as the most important determinant of whether life in the Twenty First Century will be more peaceful than the previous one.

The truth of Obama’s observation has only dawned recently in my mind. Since my retirement from the University at Albany, my life has brought me to the Asia, Japan and Korean Societies in New York. There, I have had the singular pleasure to learn about events in Asia from such august instructors as Kevin Rudd, President of the Asia Society Policy Institute, and 26th Prime Minister of Australia and Orville Schell, an impressive Chinese scholar, and President of the Chinese-America Center at the Asia Society. They, and the esteemed experts at the Japan and Korea Society are filling in the large gaps of ignorance in the education of this rank amateur in Asian history and affairs.

So, the world has turned over many times since 1949. And the next seventy years will, I’m sure, to quote Mao Tse Tung, be “interesting times.” I’m sure we all can agree that 1949 was, for these three historical events, a most significant year.