MAX EISEN is a Hungarian Jew who was deported to Auschwitz in the spring of 1944. He is a passionate speaker and educator who volunteers at the Sarah and Chaim Neuberger Holocaust Education Centre and the Friends of Simon Wiesenthal Center in Toronto. He currently resides in Toronto with his wife, Ivy. 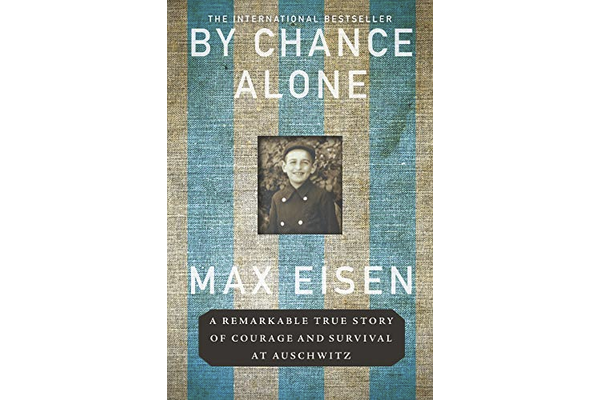 I was awoken suddenly from my short sleep to loud banging and shouts of “Raus schnell!” We were on the top bunk. Father jumped down first, then me, and then finally my uncle. The Kapos ordered us out of the barracks. It was a beautiful, sunny morning and I found myself looking at hundreds of barracks, thousands of emaciated people behind barbed-wire fences, and dozens of guard towers where SS soldiers manned machine guns and searchlights. Nearby, there were four huge chimneys belching angry red flames and smoke. The smell of burning flesh that had first overwhelmed me when I exited the cattle car still permeated the air. I could not fathom the immense size of this place, and I thought that we must be in a large industrial area. My father told me to move fast if I heard the Kapo’s orders, because otherwise they would beat me.

Tables were set up in front of our barracks, and two men sat at each one. They ordered us to come to the table nearest us in single file. Again, my father went first, I was next, and my uncle was last. The first man asked my name, my place and date of birth, what languages I spoke, my height and weight, and the color of my hair. The next man tattooed a number on my left arm: A-9892. My father’s number was A-9891 and my uncle’s was A-9893. Wherever we went, I was always between them; they were my guardian angels.

Nearby, there were piles of striped pants, jackets, and caps. I was handed one of each and put them on, but they didn’t fit well. We had no socks or underwear, no belt or suspenders to hold up our pants. From a pile of unattended dirty rags, my father managed to find a pair of trousers, and with his teeth and fingers he ripped off strips of material that he twisted into belts for me, my uncle, and himself. We stripped more pieces of cloth and wrapped them around our feet in place of socks. We also kept a small piece to use as a wipe in lieu of toilet paper. My father and uncle were inventive, and they taught me how to survive under these horrific conditions.

Once I put on these striped prisoner’s clothes, I felt like I was no longer a human being, only a number. On two strips of white material, prisoner workers stamped a Star of David with my number. As we proceeded down the line, they used needle and thread to stitch one strip on the front left side on the jacket and the other on the back. Different groups had different triangles: political prisoners got a red triangle (with a Pfor Polish or F for French, etc.), Roma people had a brown triangle, Jehovah’s Witnesses a violet triangle, homosexuals a pink triangle, habitual criminals a green triangle, and so-called asocials a black triangle. Out of all these groups, we Jews were on the lowest rung of the ladder in the camp hierarchy.

Soon, two prisoners arrived carrying a large canister of hot tea, my first food or drink in days. They gave us metal dishes, lined us up, and portioned out the tea. It tasted quite different from what I was used to at home. My father asked these men if we would see our families that day. They laughed at him, pointed to one of the chimneys spewing flames, and asked, “Where did you come from?”

My father replied, “We arrived from Hungary in the middle of the night.”

The prisoner said, “It’s 1944 and you don’t know what this place is all about? Your families have gone up through the chimney.” This was camp vernacular to describe being gassed and cremated.

At that moment, I’m sure Father realized that my mother and the rest of our family had been murdered soon after our arrival, but it took me a few days to understand the processes of this killing machine. Until I learned more about the existence of the gas chambers, I assumed that they had been burned alive. I was devastated, but I was under such threat at every moment that I could not dwell on the loss of my family during the day. I could think only of work, food, and physical survival. My father and uncle never spoke of the deaths, so when I thought of my family while I lay in my bunk at night, I was alone with my grief. In truth, it was easier to exist in a state of denial than to face this horrible reality.

After the prison workers tattooed our numbers on our left arms and inscribed them on our clothing, they lined us up once more. An officer yelled out, “Doctors and lawyers, raise your hands!” Those who did were ordered to step out of the formation and were taken away. Next, he asked for farmers. Many of us raised our hands. My father knew from his time in the labor battalions that working on a farm would give us access to potatoes, turnips, or beets. The guards selected a hundred men, including the three of us.

I was hungry, thirsty, and completely shocked by how my life was changing minute by minute and hour by hour. Everything about this place was threatening and filled me with fear, and now we were told that we were going to a different camp. I wondered if the new camp would be similar to Birkenau.

The guards marched us several kilometers down the road to Auschwitz I. En route, we passed a group of women with shaved heads and striped dresses; they were harnessed to a huge cement roller that they pulled to grade the road. Some had dilapidated shoes, some wooden clogs or sandals, and some were barefoot. The SS women guards were whipping them and yelling, “Schnell! Faster, you damn Jews!” The soles of the feet of the women without shoes had been ripped to shreds, and the rocks they walked upon were covered with their blood. The SS women were large and bursting out of their uniforms, and the contrast between them and their skeletal prisoners was striking. I couldn’t help wondering if we would be treated the same way.

Copyright Harper Collins Inc. Republished from By Chance Alone: A Remarkable True Story of Courage and Survival at Auschwitz with the permission of the publisher.