The Ghosts of Founders Past

Jason Pack is a Non-Resident Fellow at the Middle East Institute and the Founder of Libya-Analysis LLC . He frequently advises the US and UK governments on issues of sovereignty in international law . His prior doctoral work at Cambridge University explored themes of institutional and Imperial history. 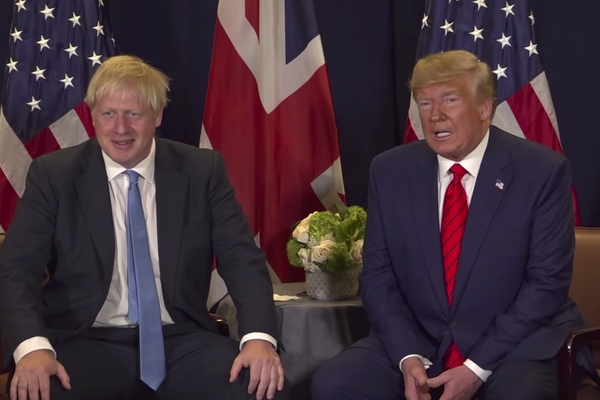 Halloween held a ghoulish surprise for American President Donald Trump and British Prime Minister Boris Johnson. As a result of their hubris, they were both forced to watch their longstanding dreams of unbridled executive authority die in the ditch of rule of law.

As a very scary October for global democracy came to an end, actions by the British House of Commons kept the UK in the European Union and largely prevented the possibility of an economically catastrophic No Deal Brexit, while the American House of Representatives passed the most fair-minded, non-partisan, and forward-looking rules for an Impeachment inquiry in American history. Despite these legislative triumphs, it is far too early to declare victory over the coordinated, Russian-backed, neo-populist authoritarian coup attempts, which have over the last few years sought to capture the epicenters of global power. Nonetheless, it is also quite necessary for historically minded citizens to look back with immense pride at what our elected representatives have achieved over the past two months.

We also need to celebrate the robustness of our institutions and the extreme prescience of our founding founders. They constructed the checks and balances of our Anglo-Saxon institutions for exactly the kind of circumstances we are now living in. When these institutions were created, they were unique in world history. They bucked the global trend throughout the Early Modern and Enlightenment periods towards greater and greater centralization of power.

Two-hundred and thirty years ago, in 1789, the United States’ House of Representatives and the Senate held their first sessions in Manhattan, weeks before George Washington was inaugurated as America's first President. This symbolism was important. Our founders had articulated in the newly ratified Constitution and Bill of Rights, that individuals were to be spared from arbitrary authority and that Congress was to have sovereignty over the domains of legislation, taxation, Declarations of War, and assuring that the President of the United States did not conspire with foreign powers against the interests of the United States or seek to use his office for personal gain.

Fascinatingly, the United States Congress first sat exactly one hundred years after the constitutional upheaval of the British Glorious Revolution (1688) and the ensuing English Bill of Rights (1689). These monumental developments established Parliamentary Sovereignty in Westminster and imported a new Protestant Royal House from The Netherlands -- a monarchy which had expressly consented to having their powers constrained even before receiving the throne. The American founding fathers were extremely aware of British precedent. They sought to adopt what they thought best about British constitutional and parliamentary practice into the new Republic.

Dispersion of powers and the supremacy of the elected legislative branch over the executive branch was the key Anglo-Saxon innovation. The founders on both sides of the Atlantic knew that circumstances would change, requiring flexibility in how the Congress and Parliament deployed their sovereign prerogatives. As such they only sketched a broad framework relating to issues like impeachment or the precise relationships between Parliament and Government, allowing future legislators and jurists to fill in the details as circumstance would require.

Today we see that these precedents, conventions, and institutions are being upheld.  In the UK, the Benn Act, the Letwin Amendment , and the rejection of the Government’s Brexit Bill timetable -- and in the U.S., the Whistleblower Complaint, the House Intelligence committee subpoenas, and the Oct 31 ground rules  for the Impeachment inquiry -- are exactly the kinds of legislation, amendments, and legal frameworks that the founders wanted our sovereign parliaments to be able to devise to fit evolving circumstances, when they dreamed up our forms of governance over two centuries ago.

The sovereignty of our parliaments is a mirror image of the freedoms we have as individuals that are encapsulated in the Anglo-American Bills of Rights.

We were truly on the crux of losing our personal freedoms. Had we been living in the younger and more centralized democratic systems of continental Europe or the even newer democracies in the former French and Spanish colonial spheres, the existing structures and precedents would have made it much harder to check an Executive keen on overreach. Those systems are what Samuel Huntington referred to in his Political Order in Changing Societies  as ‘modern’ (i.e. more centralized) with the executive being the most important branch of government, where as he referred to Anglo-Saxon political systems as 'Tudor'  (i.e. having power more dispersed and with the legislative branch as primus inter pares). Huntingdon correctly diagnosed that each new technological advance in communication and human organization had made an ever greater and more arbitrary centralization of authority possible. Huntington also grasped that what technology had made possible, new political forces and ideologies would arise to try to implement.

Miraculously, our founders anticipated developments like this, grasping the fundamental truth articulated by Huntington that advancements in communications technology makes centralization of authority increasingly likely. Our founders sought to devise institutions, which would buttress what they saw as our uniquely Anglo-Saxon cultural legacy of individual freedom by creating a sovereign legislature with robust oversight powers to check aspiring tyrants, long before they could usurp unfettered power.

On All Hallows’ Eve 2019, the Ghosts of Founders Past were reveling in their uncanny prescience by exercising their all too righteous revenge.