Jim Castagnera holds a JD and PhD (American Studies) from Case Western Reserve University. Today the president of K&C HR Enterprises, he served in the U.S. Coast Guard from 1969-1973. 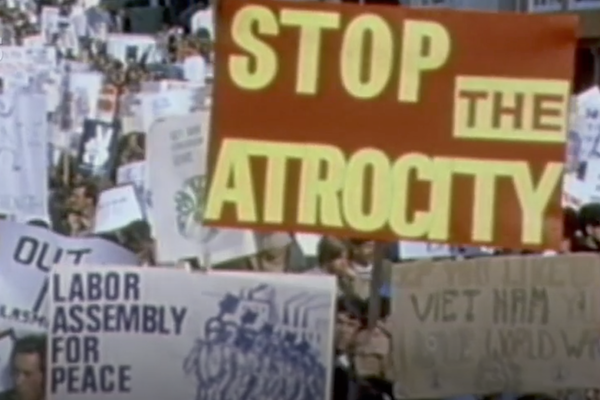 “Old men forget; yet all shall be forgot, But he'll remember, with advantages, What feats he did that day,” predicted Shakespeare’s Henry V.

Well, I’m not so sure that mine was much of a feat, that pleasant evening of October 15, 1969.  But just being in Manhattan, marching toward St. Patrick’s Cathedral, was in itself risky business…that is, if you were a member of the American military.  And so we were, my friend Johnny and I.

Of course, we wore our civvies.  All the same, we stood out.  Fresh from the Coast Guard’s boot camp in Cape May, New Jersey, just a month earlier, we still had nothing but stubble on our scalps… this when “Hair” was the hottest ticket on Broadway. Neither of us owned a civilian cap, so, yes, indeed, we stood out.

What would have happened to us, had we been spotted by a Coastie officer or senior petty officer stationed with us on Governors Island in New York harbor is hard to say.  At a minimum, I suppose, I could have kissed goodbye my berth in the February 1970 Officer Candidate School class.  Worst-case scenario: our commanding officer, who was in profile the spitting image of the American eagle, was fond of warning us that a cutter left from the island for Vietnam almost weekly.  He could make sure the next to sail found room for any one of us who didn’t properly appreciate our cushy place in the personnel department.

That would have been very bad luck, indeed, especially considering I had joined the Coast Guard to avoid being drafted into the Army or Marine Corps. So perhaps being in Manhattan, candle in hand, with the tens of thousands who turned out that night, was something of a feat.

The Big Apple gathering was only one of many occurring across the country that night.  Boston’s was the largest, as Senator George McGovern was the big draw.  A Rhodes Scholar named William Jefferson Clinton organized one in England, a fact that would cause him a bit of trouble in 1992.  But he assured voters he hadn’t even inhaled and skated past accusations about his Oxford antics to slide into the White House.

Feat or no, as active-duty military, Johnny and I added to the noteworthy diversity of the Moratorium.  The organizers consciously chose to take to the streets, rather than focusing on college campuses, so that John and Jane Q. Public might participate. And participate they did.  To my knowledge, October of ’69 marked a turning point in opposition to the war.

The turn had been a long time --- and 45,000 young American lives --- in coming. In 1964, when I was still in high school, journalists first began speculating that U.S. “advisors” in South Vietnam were actually engaging in combat.  August 2, 1964, a month before I began my senior year, was the day the USS Maddox claimed to have been attacked by North Vietnamese torpedo boats. Though the exchange of fire left no American casualties, it got LBJ a Congressional blank check (the Tonkin Gulf Resolution).

During the next four years, while I enjoyed my 2-S (college student) deferment and majored in fraternity at Franklin & Marshall College, the twin themes in Vietnam were escalation of American troops on the ground and American bombs from the air. Frustrated and hated by many, Lyndon Baines Johnson pulled himself from the ’68 race. More Hamlet than Henry V, Vice President Humphrey dithered his way to defeat, handing Richard M. Nixon the most remarkable come-back story in American political history.

Nixon claimed during the campaign to have a secret plan to extricate us from the war.  A college senior by then, I dearly hoped his plan would kick in before I lost my deferment. But by the time I received my reclassification to 1-A (prime meat, if you will) in June of ‘69, thousands more American boys had died during Tricky Dick’s first half-year in office.  I called my local draft board and asked if I could appeal my reclassification on the basis of a graduate fellowship to Penn State.

“Sure, you can appeal, son,” came the elderly reply down the telephone line.

“What will that do for me?” I followed up.

“You’ll be inducted in August instead of July,” she responded.

Thus, my four-year enlistment into the ranks of Charlie Gulf.

And, thus, following nine weeks of basic training, a week of liberty, and hardly a month in my Governors Island duty station, I was walking down Fifth Avenue to the Cathedral, where the speeches took place.  And I was in the company of men and women from all walks of life and economic circumstances.

The October events were dwarfed a month later by the Moratorium-on-steroids in Washington.  Outdoing its October predecessors, the November 15th event drew a half million souls, including many bright lights from the entertainment industry.  Two days prior to the Saturday extravaganza, at least 40,000 made a Thursday evening “march against death” that dragged into Friday, making the Moratorium something of a three-day phenomenon.

The Moratoria (for the benefit of any Latin scholars reading this) were inspiring, hopeful, even exhilarating… and utterly useless, so far as I could tell then or can remember now.

Nixon, reportedly infuriated but presenting a façade of indifference, allowed the war to drag on.  I was stationed in Cleveland on Lake Erie, when 25 miles away in May of 1970 National Guardsmen shot students at Kent State University.  Campuses across the country erupted in turmoil and rage.  Two years later, Nixon won reelection by a landslide against the same McGovern who had captivated the crowd in Boston three years earlier.  I guess Nixon was right about a silent majority.

Old men forget?  No…as I watch events unfolding in Washington today, I recall the river of candles flowing up Fifth Avenue fifty years ago. And I recall the words of another writer, a Frenchman, I think: “The more things change, the more they remain the same.”  (Don’t ask for that in French. Remember, I majored in fraternity and got D’s in French.)