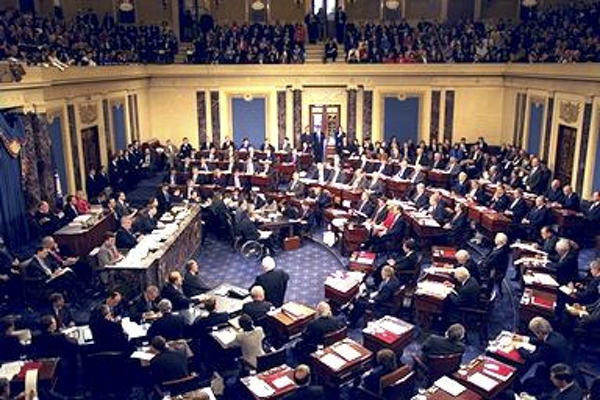 Donald Trump joins presidents John Tyler, Andrew Johnson, Richard Nixon, and Bill Clinton as yet another president facing impeachment. In the wake of Nancy Pelosi’s announcement, historians were quick to draw comparisons between them, and ponder how past impeachments could inform our current moment.

This article discusses when and how impeachment first made its way into American History and how it has shaped the American Presidency through the years.

Video of the Week: The Historical Context of Impeachment

In this video from MSNBC, Chris Jansing and presidential historian Jon Meacham discuss the broad historical context of impeachment.

This article discusses how the British initially shaped Impeachment in the United States, but how it has changed over the course of history.

‘He lies like a dog’: The first effort to impeach a president was led by his own party by Ronald G. Shafer

Unbeknownst to most Americans, John Tyler was actually the first president to face potential impeachment.

Why Donald Trump is much more dangerous than Andrew Johnson by Sidney M. Milkis and Daniel J. Tichenor

This article draws on similarities between both Johnson’s and Trump’s rhetoric and administration, showing how these similarities could have played a role in both of their impeachents.

In this article from the Associated Press, historians dive deep into the impeachment of Andrew Johnson, drawing many similarities between Trump and Johnson .

This article provides a brief history of Watergate and how it led to Nixon’s impeachment.

President Trump’s lack of trust in the media is not a new phenomena, as seen by similar portrayals of the press during the Nixon Era.

“The System Worked!” Watergate’s Lesson in an Age of Trump by Michael A. Genovese

Are our political institutions strong enough to protect us from yet another dangerous president? Michael A. Genovese investigates.

I Voted to Impeach Nixon. I’d Do the Same for Trump. By Elizabeth Holtzman

In this Op-Ed, Holtzman argues why Nixon deserved to be impeached and why Trump’s similar actions as President warrant his impeachment.

Impeachment, Constituional History, and the Founders

This is why the impeachment clause exists by Adam Serwer

In this article from the atlantic, Adam Serwer tells us that The Framers underestimated the extent to which a demagogue might convince his supporters that the president and the people are one and the same.

In his HNN article, Harlow Unger breaks down the concept of emoluments into digestible terms and examines how emoluments impacted prominent early Americans.

Historian Harlow Giles Unger gives us a glimpse into the debate about impeachment at the Constitutional Convention.

What we get wrong about Ben Franklin’s ‘a republic, if you can keep it’ by Zara Anishanslin

Zara Anishanslin analyzes Benjamin Franklin’s famous quote in the context of Nancy Pelosi and Neil Gorsuch quoting the line publicly in the wrong context that it was intended for.

Brent Kendall argues that impeachment has been defined by legal procedures in the Constitution balanced with “political calculation.”

Why Originalism should apply to impeachment by Donald J. Fraser

Donald J. Fraser supports the idea of originalism to apply to the impeachment inquiry. Originalism is the idea that “the Constitution should be interpreted in accordance with its original meaning”.

Jordan E Taylor discusses how the first generation of American political leaders understood the danger of foreign involvement in their elections because they lived through it.

The History of Whistleblowers

Much of the news regarding the pending impeachment inquiry into President Donald Trump has focused on a whistleblower's report regarding the President’s dealings with Ukraine. Whistleblowing has a rich history in American politics, especially under the context of impeachment. The following articles explore examples of such history, their potential implications for the current inquiry, and the prevailing rhetoric on today’s whistleblower:

The History Briefing on Whistleblowers: How Historians Covered Breaking News by Sam Mastriani

HNN intern Sam Mastriani compiles an overview of historians’ responses to the whistleblower in the Trump impeachment inquiry.

Whistleblower or Spy? What the History of Cold War Espionage Can Teach Us by Marc Favreau

Marc Favreau cuts through the Whitehouse’s rhetoric comparing today’s whistleblower with a spy, drawing a line between whistleblowing and espionage through an examination of Cold War history.

Before the Trump Impeachment Inquiry, These Were American History's Most Famous Whistle-Blowers by Olivia Waxman

Olivia Waxman explores the history of the term “whistle-blower”, highlights some of the United States’ most famous whistle-blowers, and outlines the reality of how non-glamorous being a whistle-blower actually is.

Jennifer Pacella explores the history of retaliation against whistleblowers, specifically referencing the likes of Edward Snowden and Chelsea Manning.

U.S. Whistleblowers First Got Government Protection in 1777 by Christopher Klein

Breaking Down Republican Lawmakers’ Defenses of Trump by Steve Hochstadt

Steve Hochstadt describes the defenses Republican Lawmakers have made for President Trump, and the inability of these Lawmakers to take an active stand against what he sees as corruption.

The History Behind Trump’s Defenses

President Trump has pushed back against the impeachment inquiry, calling it a “witch hunt” and attacking the whistleblower whose report triggered the inquiry. Trump himself has denied any wrongdoing altogether, tweeting “there is no quid pro quo!” Congressional Republicans have backed him up, despite his comparison of his treatment to a lynching. How should we understand what exactly quid pro quo is, and how do we place Trump’s responses in the context of the history of impeachment? The articles below attempt to do so.

The Return of the ‘Witch Hunt’ Analogy by Tony Fels

The ‘Witch Hunt’ analogy  has its history dating back the Salem witch trials of 1692 and even made an appearance in the impeachment of Bill Clinton in the 1990s, but historians help us understand if the term was used effectively.

So you want to talk about lynching? Understand this first. by Michele Norris

After referring to his legal impeachment proceeding as a “lynching,” drawing to some of the darkest annals of U.S. history, historians point to the brutal history around the term and its meaning in light of President Trump’s comment.

Whistleblower or Spy? What the History of Cold War Espionage Can Teach US by Marc Favreau

President Donald Trump has called the source of the whistleblower complaint “close to a spy,” and even the modern history of espionage serves as a guide to Trump’s accusation.

A History Of 'Quid Pro Quo'

The central question to President Donald J. Trump’s impeachment proceeding is whether or not he engaged in a quid pro quo with the leader of Ukraine, thus one must comprehend the true meaning to the phrase “quid pro quo” as Trump refuses to believe that any quid pro quo ever happened.

This impeachment inquiry is history, and what each Republican politician does or doesn’t do, says or doesn’t say, will define their legacies.

Why Donald Trump is much more dangerous than Andrew Johnson by Sidney M. Milkis and Daniel J. Tichenor

Down the Rabbit Hole With Donald Trump by Tom Engelhardt

One way to explain the Trumpian world we’ve been plunged into is through Lewis Carroll’s Alice’s Adventures in Wonderland.

Beyond adding context to current events, many historians have explicitly advocated specific strategies and actions. Others have predicted what Americans can expect in the weeks and months to come. These perspectives show the variety of ways historians understand politics and anticipate future developments.

Why We Must Impeach by Sean Wilentz

In this powerful article for Rolling Stone, Sean Wilentz argues that the Founding Fathers created impeachment for this exact purpose. He gives compelling reasons why utilizing this tool is essential for American democracy.

What Does History Tell Us About Impeachment and Presidential Scandal? Here's 7 Historians' Analysis, Kyla Sommers

Breaking Down Republican Lawmaker's Defenses of Trump by Steve Hochstadt

Could Trump Lose the Republican Nomination? Here's the History of Primary Challenges to Incumbent Presidents by Olivia Waxman

What If Mike Pence is the 2020 Republican Nominee? by Ronald L. Feinman

If Donald Trump is removed from office and Mike Pence is the 2020 presidential nominee, what can we expect? What can Lyndon B. Johnson, Gerald Ford, and Calvin Coolidge teach us?

What If Donald Trump Resigned? by Vaughn Davis Bornet

Dr. Bornet argues the easiest path forward for the nation would be if Donald Trump just resigned.

As The Trump Administration Demonstrates, We Have Undervalued Virtues And Values by Walter G. Moss

Dr. Moss argues that to defeat Trump in the 2020 election, Democrats must agree upon and advocate central values and to contrast with Trump's corruption.

Trump and the Divine Rights of Kings by Ed Simon
Donald Trump and King Charles I are political leaders in vastly different capacities.  But how do their abuses of power relate to removal from office?

Plutarch - a roman historian and essayist - was known for his comprehensive comparisons.  Using his model, Morrow Trump compares to other world leaders dating back to Julius Caesar.

Who Will Be America's Brutus? By Michael Genovese

Julius Caesar was assassinated because Brutus - a respected leader with behind the scenes knowledge - decided he was becoming too powerful.  Will an American leader take the same responsibility and provide the evidence to impeach Trump?

The Surprising History of Impeachment by Frank Bowman

Frank Bowman III, author of “High Crimes and Misdemeanors: A History of Impeachment for the Age of Trump,” sat down with CNN to discuss how the history of impeachment-even as far

back as the Magna Carta, informs Trump’s impeachment proceedings today.