J.D. Dickey is the author of the forthcoming American Demagogue: The Great Awakening and the Rise and Fall of Populism, published by Pegasus Books. 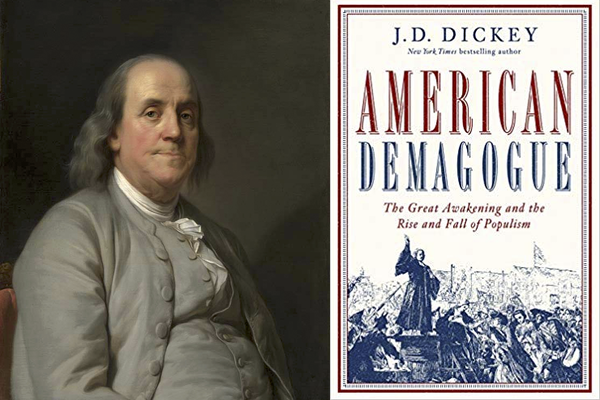 In 21st century America, evangelical Christianity is a bulwark of the political right. Not only are evangelicals some of Donald Trump’s firmest supporters, but the born-again movement has translated its power into an array of churches, radio and TV networks, print media and political action committees designed to advance the fortunes of the Republican Party. Indeed, the association of evangelicalism with reactionary politics is so well known as to be axiomatic (despite notable exceptions such as African American evangelicals who are also unshakable Democrats). Surprisingly, however, during America’s first major evangelical revival — the Great Awakening of the 1730s and ’40s — one of its most important figures had little use for religious conservatism. In fact, he wasn’t a preacher at all, but the reform-minded, freethinking Philadelphia printer Benjamin Franklin.

Franklin’s role in the Awakening is unexpected, considering his well-documented hostility to organized religion, especially in its institutional and hidebound forms. From his youth, he found the Calvinism widely preached in New England to be “very dry, uninteresting and unedifying” and sought out an alternative system of belief. With a questing mind and relentless talent for invention, he crafted a detailed moral inventory that highlighted 13 virtues that he found essential, among them temperance, justice, cleanliness and humility. His own idea of God favored these qualities, even if that God was an austere figure who stood at some distance from the daily concerns of those who professed to believe in him. If Franklin was measured in his conception of the deity, he could be downright hostile to clerics and those who enforced church authority. In one case, he compared a group of Presbyterian ministers to “grave and dull Animals…or if you will, Rev. Asses.” Nonetheless, despite these feelings, when the evangelical revival came to Pennsylvania, he did all he could to advance the cause.

The key was his association with the Anglican priest and firebrand George Whitefield. Although legendary ministers such as Jonathan Edwards had already led multiple revivals in New England, Whitefield enflamed passions well beyond the region. By the time his second tour of British North America (from 1739-41) was complete, the English preacher had ignited a Christian revival throughout the colonies. As Franklin expressed it in his Pennsylvania Gazette newspaper, “the alteration in the face of religion here is altogether surprising,” as outbreaks of public piety, a surge of church attendance, and a new hunger for devotional books and pamphlets all marked the sudden rebound in Protestant zeal. Franklin himself profited by the revival, and it was due in no small measure to his personal and business alliance with Whitefield himself.

Franklin’s skills as an entrepreneur were unmatched in the colonies, and he found countless avenues to benefit himself and his business. He published Whitefield’s private journals, along with his sermons ; he publicized the travels of the preacher and his tour stops around the region; and he hawked memorabilia such as portraits and engravings of Whitefield to round out his growing inventory of devotional goods that capitalized on the Awakening. In so doing, Franklin not only enhanced Whitefield’s celebrity; he expanded the movement the preacher led, as Whitefield drew crowds of up to 20,000 or greater to his incredibly popular sermons. It’s hard to imagine the movement achieving the power it did without Franklin’s efforts, just as it’s hard to appreciate why Franklin did so, beyond the simple urge to make money.

The preacher and the printer differed markedly in belief: Franklin promoted a system of virtue that he called a “bold and arduous project of arriving at moral Perfection” through upholding the various qualities he esteemed. Whitefield, by contrast, argued for a stringent Calvinism that demanded sinners confess to their sins and be redeemed by the “New Birth” (to be born again, in modern parlance) to have even a small chance that God would save them from eternal damnation. Franklin understood the necessity of human free will and argued for proper morals and good conduct; Whitefield saw divine predestination and human depravity as essential to his theology. All of this should have made the Anglican priest anathema to Franklin. Instead, he became one of his most reliable friends — for decades until Whitefield’s death.

One reason is that Franklin stood in awe of the preacher’s abilities in the pulpit. Since Whitefield had some experience in the theatre as a youth (before rejecting it as ungodly), he was able to channel his skills into electrifying public performances in which he brought audiences, and often himself, to fits of tears. Franklin marveled over “the extraordinary influence of his oratory on his hearers” and praised the way the revival had altered the corrupt habits of his fellow Philadelphians. He saw “it was wonderful to see the change soon made in the manner of our inhabitants. From being thoughtless or indifferent about religion, it seemed as if all the world were growing religious.” If this seems surprising coming from Franklin, it shouldn’t be: the printer appreciated the upturn in public morality, regardless of the means necessary to achieve it. Part of this stemmed from the ennobling effect he saw in religious belief; the other stemmed from his fear of what would happen if it didn’t exist. As he later reflected, “If men are so wicked as we now see them with religion, what would they be if without it?”

Franklin also seemed to have a genuine affection for Whitefield. Each clearly benefited from the financial arrangement they had, but more than this, the two men exchanged letters and expressed bonhomie in ways that went well beyond mere profit-seeking. Later in life, Franklin even proposed they settle a colony on the Ohio River: “What a glorious thing it would be, to settle in that fine country a large strong body of religious and industrious people!” The plan did not come to fruition, but as the years passed the bonds between them only seemed to grow stronger, even though neither wavered in his core beliefs. Whitefield regularly encouraged Franklin to convert to Christianity; the printer just as regularly rebuffed him. On one occasion, after Whitefield stayed at Franklin’s house, the preacher suggested Jesus would reward Franklin if he had done so out of a sense of Christian charity. Franklin replied, “Don’t let me be mistaken; it was not for Christ’s sake, but for your sake.”

In the end, Franklin’s association with Whitefield and his role in promoting the Great Awakening benefited him greatly. Not only he profit handsomely by printing the tracts of revival preachers; he was able to enjoy the fruits of this and his many other business ventures to retire early and devote his attention to the needs of public affairs and, decades later, the revolution. The irony was dual: a man who rejected the tenets of the first great evangelical revival helped spread its message and ensure its success, and in so doing the profits he earned from that revival allowed him to devote his time to politics, and eventually emerge as a champion of the separation of church and state.