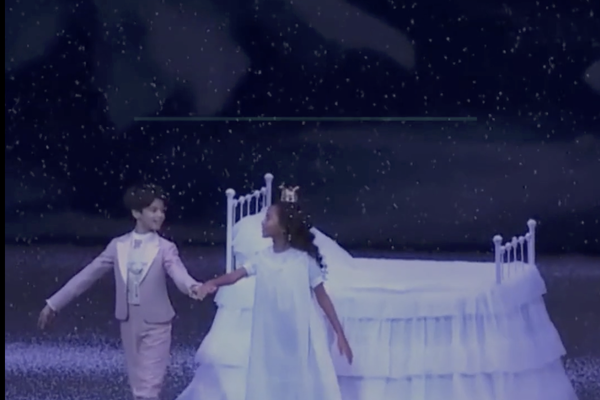 I reveled in watching the New York City Ballet’s gorgeous production of Tchaikovsky’s The Nutcracker ballet at Koch Theater, Lincoln Center, New York on Tuesday night. Particularly lovely was the scene in which it snows on stage. Later that night, driving home, it started to snow for real and a one-inch snowfall covered the metropolitan New York area like a soft, gentle white blanket an hour later. There was snow on the treetops, the bushes, the shores of lakes, the roofs of buildings, country lanes, barns, vast lawns, highways and byways.  Perfect.

The Nutcracker has been staged by the New York City Ballet since 1954 and in that sixty-five years has brought boundless joy to tens of thousands of people, as other productions of The Nutcracker all across the country have done. If the Nutcracker boy prince saves his heroine from the army of huge mice, the Christmas tree grows from twelve to forty feet, the Sugarplum Fairy delights the audience and armies of neatly uniformed toy soldiers march across the stage, it is time for the Nutcracker and time for Christmas.

The production of the ballet that I saw at Lincoln Center on Tuesday was wonderful. I have seen it several times over the years and each time it gets better. This production was the best. First, it has that wonderful, rhapsodic music of Peter Tchaikovsky. It has sensational dancing by the enormously skilled members of the New York City Ballet company, the 65 year old and flawless original choreography by George Balanchine, a lot of adorable kids led by  Sophie Thomopoulos (in the performance I saw) as Marie and Brandon Chosed as her pal Fritz, Lauren Lovette as the Sugarplum Fairy, Joseph Gordon as her cavalier and Unity Phelan as Dewdrop.

The story in the Nutcracker is simple. A number of families gather at the home of a friend for the Christmas holidays. They all dance, the adults on the left side of the stage and the children on the right. The adults are fine dancers but, surprisingly, so are the children. Later, the parents carry the little ones off to bed and they retire, too. Little Marie falls asleep on a couch in the parlor clutching a Nutcracker doll she received as a present. At night, she dreams that the doll has become a life size Nutcracker prince who saves her from an army of terrifying huge mice. He uses a small battalion of adorably dressed toy soldiers to do so. In the second act, the pair watch a dreamland party with numerous ballet performances. At the end of the party, the two kids soar off into the night sky in a bright, white sleigh

The Nutcracker ballet, today hailed worldwide by critics, got off to a rough start in chilly old St. Petersburg, Russia, when it debuted in 1892. The critics just hated it, as did audiences. They all thought Tchaikovsky, who would die a year later, had written his worst ballet. They all believed that the story, based on E.T. A. Hoffman’s  tale The Nutcracker and the Mouse King,  was silly, that the party scene was  far too long, that the best dancing came at the end of the performance and not early in it, as they all believed proper, and that the show starred children and not seasoned dancers. Oh, everybody back in 1892 thought Tchaikovsky’s near-immortal music was absolutely dreadful, too.

The reception was so ferocious that ballet companies rarely staged the Christmas ballet. In 1919, though, little George Balanchine played the role of the child prince and loved the show. Later, in 1954, as head of the New York City Ballet, he saw several more productions of it and brought it to New York. There, he staged if differently. Balanchine did not see it as a mere ballet, but as a Christmas season spectacular. If it had more family appeal, he thought he could make it a holiday hit and he was right. He substantially increased the role of children in it, built scrumptious sets, merged the regular ballet company with kids from a ballet school and surrounded it with holiday cheer every way he could.

It was a hit right away in that winter of 1954 and has been a worldwide success ever since. In fact, kids who see it grow up and take their own kids and then their grand kids to the ballet. It has had a generational appeal. The ballet has also become a box office superstar. Today, about 40% of annual ticket revenue for all Americana ballet companies comes from productions of The Nutcracker.

When you go to sleep some snowy night during the holiday season, close your eyes tight and wait for the huge mice to attack and the Nutcracker Prince to save you and all of your loved ones. He’ll be there, I assure you, ready to do battle.