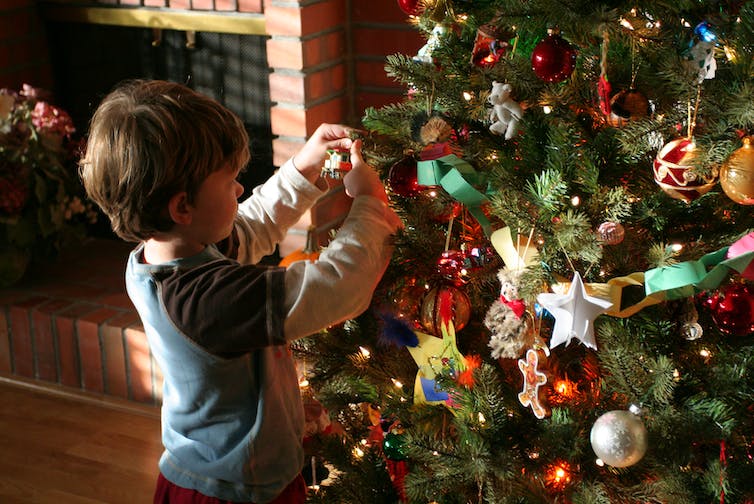 Decorated with ornaments purchased, created and inherited for years, even generations, Christmas trees are a reflection of a family’s history and tastes. John Morgan/flickr, CC BY-SA

As Christmas approaches, many families undertake a familiar ritual: an annual sojourn to the attic, basement or closet to pull out a box of treasured ornaments bought, created and collected over years, even generations.

Hanging these ornaments on the tree is an opportunity to reconnect with memories of personal milestones, holiday icons and, in many cases, destinations visited.

But, I argue, it may be time to take some of these old travel keepsakes off the tree.

In researching my 2019 book, “Confederate Exceptionalism,” I studied sites throughout the American South whose histories are tied to enslaved labor. Seemingly charming souvenirs are sold to commemorate many of these places – from the White House of the Confederacy in Richmond, Virginia, to Stone Mountain, a Georgia cliffside carved with images of Confederate generals.

Christmas ornaments are among them. And while these keepsakes may seem apolitical, their very circulation enables Confederate myths and symbols to become “normal” features of people’s daily lives. My research suggests they can thus desensitize Americans to the destructive nature of such stories and icons. 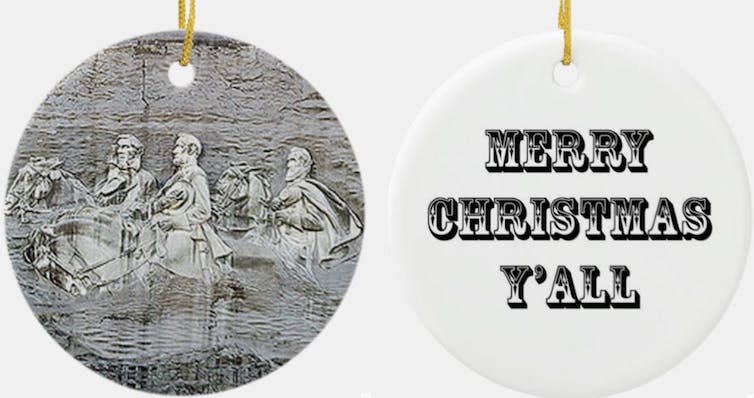 The front and back of a Christmas ornament commemorating Georgia’s Stone Mountain, the ‘Mt. Rushmore of the Confederacy,’ screengrab Dec. 17, 2019. www.zazzle.com

In recent years the U.S. has seen heated conversations about public symbols that commemorate the Confederacy, centered on the Confederate battle flag and statues of Confederate generals.

After a white shooter’s deadly 2015 massacre of nine black congregants at Emanuel AME Church in Charleston, South Carolina, activist Bree Newsome scaled the flagpole outside the state capitol to remove the Confederate flag flying there.

After Newsome’s act of civil resistance, then-President Barack Obama referred to the Confederate battle flag as “a reminder of systemic oppression and racial subjugation.” But some in the U.S. and even abroad still see the flag as a symbol of “heritage not hate.”

Statues of Confederate generals that dot courthouse lawns and public plazas across the United States have prompted similar controversy. In 2017 plans to remove a Robert E. Lee statue triggered violence in Charlottesville, Virginia, where a white supremacist at the “Unite the Right” rally killed activist counter-protester Heather Heyer.

That tragedy spurred more cities, towns and colleges to remove or relocate Confederate statues seen as offensive. Nationwide debates followed on how best to grapple appropriately with this chapter of American history.

Beyond the scope of these national discussions, my research on Confederate myths and memory finds, many unexamined Confederate symbols have made their way into people’s kitchens, bedrooms and living rooms.

Take “Confederate cookbooks” that help modern-day chefs recreate the recipes of the Old South and stuffed animals based on Little Sorrel, the taxidermied war horse of Confederate General Stonewall Jackson, for example. 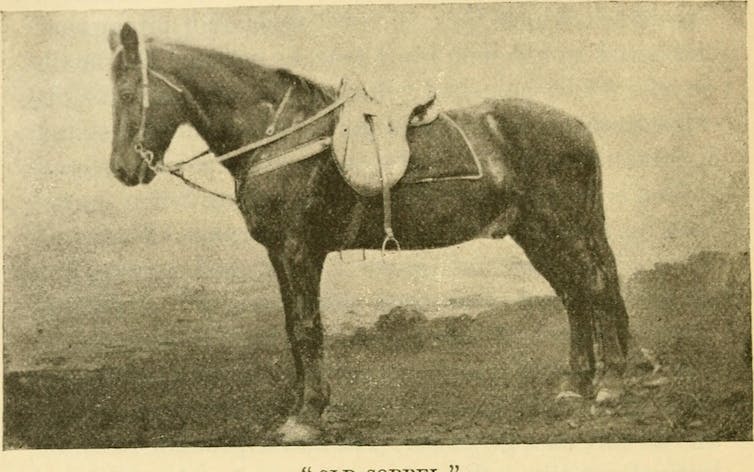 People probably don’t reflect on the horrors of slavery when baking an apple pie or purchasing a cuddly toy for their child. They aren’t meant to. But they are participating in that history and its mythologies nonetheless.

In that way, seemingly apolitical objects like cookbooks, toys and Christmas ornaments commemorating Confederate history serve to normalize – rather than problematize – the objects, rituals and stories surrounding the Confederacy.

More than a souvenir

As a result, tree ornaments depicting the White House of the Confederacy, a home of Gen. Robert E. Lee or the carvings of Stone Mountain are not simply mementos of a leisurely visit. 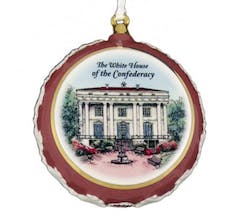 A decorative ornament on sale at the White House of the Confederacy. American Civil War Museum

These places and people are also icons of the “Lost Cause,” an ideology that romanticizes the Confederacy by portraying the American Civil War as a battle of “states’ rights” rather than a fight to preserve slavery.

The Lost Cause is still taught in some Southern schools, demonstrating that the vestiges of the Confederacy are powerful and lasting. Like Confederate statues and flags, Confederate Christmas ornaments strengthen this myth that the Confederacy – an entity built on white supremacy – was about southern “heritage.”

What appears to be a nostalgic trip reminder, then, is in fact deeply implicated in a complex matrix of memory, history and racism in the United States. It’s just packaged in a seemingly benign way.

Christmas ornaments communicate something about the person or family that displays them. They reveal their history, passions and aesthetic taste.

So pause to consider whether your Christmas tree represents your values. Does a keepsake from Stone Mountain really belong between an ornament crafted in a kindergarten classroom and a glass nutcracker gifted by your grandmother?

[ Get the best of The Conversation, every weekend. Sign up for our weekly newsletter. ]