The Real Santa Who Fed the Hungry

William Lambers is an author who partnered with the UN World Food Program and Catholic Relief Services on the book Ending World Hunger. His writings have been published by USA Today, History News Network, The Hill and many other news outlets. 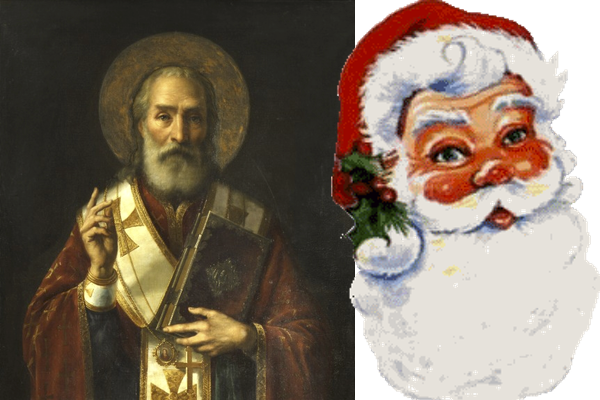 The Santa Claus we know and love was based on St. Nicholas, a 4th century Christian bishop from what is now modern day Turkey. St. Nick's idea of Christmas today would be gifts of food for the millions of starving people in the world.

George McKnight's 1917 book on St. Nicholas describes the legend of the saintly man's dedication to feeding the hungry: "It was so on a time that all the province of S. Nicolas suffered great famine, in such wise that victual failed. And then this holy man heard say that certain ships laden with wheat were arrived in the haven."

Those ships were just making a stop and were actually en route to another destination to deliver the wheat. St. Nicholas went to those ships pleading for food donations to help his starving people. However, the ship captains said they could not spare any because it had been measured. The Emperor in Alexandria, whom they were making the delivery for, would punish them if they gave away food before reaching their destination.

St. Nicholas promised them, in God's name, that any amount they gave would not lessen their cargo. The ship captains agreed and unloaded food for Nicholas to distribute to his people.

It is written "Then this holy man distributed the wheat to every man after that he had need, in such wise that it sufficed for two years, not only for to sell, but also to sow."  The communities of St. Nicholas now had food again.  And when those ships continued on and arrived at their destination their cargo measured no less than before. It was another miracle they attributed to Nicholas, servant of God.

The greatest gift one can give is food to a starving person. Doing so does not diminish what you have, but rather lifts up the hungry and yourself. This story of St. Nicholas is a great example for anyone to be a great negotiator in getting food to the hungry. Imagine if every leader in the world followed that example of St. Nicholas.

Elizabeth Rundle Charles' book on saints tells of St. Nicholas and his passion for helping the poor and hungry calling him "the saint of the people, of the oppressed and of strangers."

St. Nick's kindness and the poem "A visit from St. Nicholas", (known as "Twas the night before Christmas") led to the creation of Santa Claus and also the gift giving in today’s holiday.  We all know that sometimes this goes to the extreme. If you turn on the television in December you will definitely see commercials about sales and super expensive products. Christmas shopping can easily get wild and excessive.

But if we are to be true to the legend of St. Nicholas, Christmas should include food for every hungry person in the world. For we know the real St. Nicholas, who lived the Gospel, would not allow someone to starve.

As this Christmas arrives though many people are starving, including children.  There are massive hunger emergencies like in Southern Africa. The UN warns "more than 11 million people now experiencing “crisis” or “emergency” levels of food insecurity (IPC Phases 3 and 4) in nine Southern African countries: Angola, Zimbabwe, Mozambique, Zambia, Madagascar, Malawi, Namibia, Eswatini and Lesotho."

In the Horn of Africa likewise drought has caused food shortages in Somalia, Ethiopia and Kenya. The impact of climate change is very real for the hungry in these nations.

South Sudan, Afghanistan and Syria are all suffering in hunger because of conflict. Likewise the Sahel region of Africa is experiencing severe hunger from conflict and drought. In Yemen, a civil war has left over 20 million people in need of food aid. Haiti and Central America also live in hunger because of drought.

Relief agencies like the World Food Program, Save the Children, UNICEF, Catholic Relief Services and others don't have enough funds to keep up with the hunger crisis. We can help them feed the hungry.

The non-profit Edesia, which makes life-saving Plumpy’nut to treat malnourished children, sent some overseas last year along with stuffed animals. The starving children would have food to eat and a friend so they are never alone. That is a gift in keeping with the true Christmas spirit.

To follow St. Nick's example is to feed the hungry. Donating to hunger relief in honor of someone would be a magical Christmas gift that you would never forget.