Somewhere Over Their Rainbows - Deanna Durbin and Judy Garland 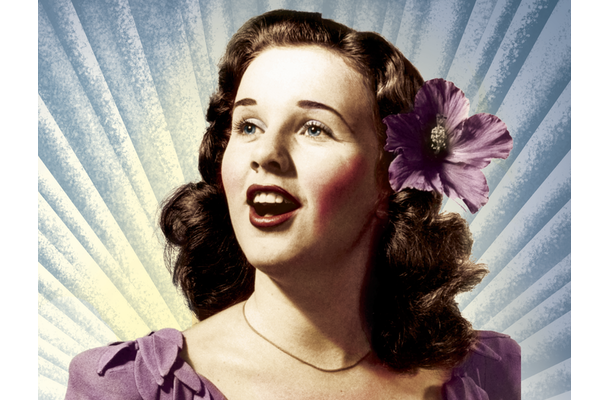 Do you remember actress Deanna Durbin? If so, you are one of the few.

How about Judy Garland? Well, of course you do - Dorothy from Oz.

In the late 1930s and 1940s, Deanna and Judy, just teenagers, were two of the biggest stars in Hollywood. Deanna was not only a superb actress, but as a singer had the voice of an angel. Judy had, well, Judy had it all.

Judy stayed in Hollywood, led a tragic life and died of a drug overdose at 47. Deanna fled the bright lights and cameras at age 29, stunning the world, moved to a farm house in France, became a recluse and never appeared in another film. Over the next 62 years, she only gave one single media interview. Two careers, two lives and two distinctly different stories.

Actress/singer Melanie Gall has merged the two stories into one, Ingenue: Deanna Durbin and Judy Garland, and the Golden Age of Hollywood. The one woman play just opened at the Soho Playhouse, on Van Dam Street, in New York. Gall, who also wrote the drama, has done a fine job. It is an eye opener of a tale and an absolute treasure chest of show business history. Gall plays Deanna and brings in the story of Judy in an interview with an invisible New York Times reporter. It is Deanna’s story, not Judy’s, and she sings Deanna’s music and not Judy’s (except for Somewhere Over the Rainbow).

I knew a little bit about Durbin, the Canadian born singer who rocketed to fame by the age of 15, but not much. Nobody knows very much about her. When Durbin fled Hollywood, she not only never appeared as an entertainer again but pulled the plug on most of her American movies and you can hardly see them any more (ironically, a Durbin movie and Garland film were playing at the same time on television last week).

The legend was that the two, who starred in a movie together in 1936, were lifelong bitter rivals, but really, they were not. There may have been some jealousy between them, but I doubt they were enemies. Gall, in her story, suggests that latter version, and points out that Garland thought Durbin was shortsighted in leaving the movies and wished she had remained.

Gall tells a fascinating and colorful story. Durbin came to Hollywood as kid, like so many others, but had a great voice and won a $100 a week contract with MGM. There, she met Garland and the two became close friends. Movie mogul L.B. Mayer did not think he needed two child stars, so he fired Durbin (the play suggests that might have been accidental and he may have wanted to boot Garland), Durbin, at her new studio, Universal, became famous right away and her first few pictures were so successful that they saved the studio (Deanna starred in  21 movies in her storied career). Judy caught fire with The Wizard of Oz and became immortal. The rumor was that MGM wanted Deanna for the role of Dorothy in Oz and that she auditioned for it, but refused it because Judy wanted it

Gall tells the audience that Durbin was probably a better singer, but Judy had more hits. However, film historians seem to agree that in that era Durbin was one of the most beloved actresses in the world. In 1947, she was not only the highest paid actress in Hollywood but the highest paid woman in America.  That year her fan club was the biggest on earth. American GIs in World War II even named a bomber after her. The Metropolitan Opera was even after her to join its company. Deanna was also Winston Churchill’s favorite actress.

So why did Durbin become a recluse? Gall says she was tired of Hollywood, found fame tedious and wanted to live a normal life. That can’t be all of it, though. Others say she hated the studio system of dictatorial control of a performer’s life and thought her life was over at 29, as it was for many actresses, and hated never being cast in very serious roles (the directors always had her singing something somewhere in the script).

Gall is quite good playing Durbin and she is a superb singer. The problem with the play is that It is a play abut Durbin and Garland without Garland. It would be much better as a two-character play and it should be a bit longer (it’s just a little over an hour). Gall carries the play well, but you really need a richer story and more nuance about Judy’s life.

Also, nowhere in the play is any reference to Ray Bradbury’s The Anthem Sprintersa delightful short story about a Deanna Durbin movie screened in Ireland followed by a race of moviegoers to a pub before the cinema starts to play the Irish national anthem at the conclusion of the film.

The story needs a far better explanation of why Durbin fled Hollywood. What did her friends say? Show biz buddies? Neighbors? Family? How did her rather wild personal life (three marriages and two out of wedlock pregnancies) affect her?

She is far better known today in the United Kingdom and Europe that in the U.S. because the actress never cut off her films there. In fact, there is still a ‘Deanna Devotees’ fan club in England.

The best part of the play, for me, was the question and answer session at the end. Gall is an authority on both women and researched their lives thoroughly. She really illuminated their lives by just answering audience questions. It was there, in that Q and A session, that she dropped her bombshell. It seems that back in the early 1950s, when Durbin had been retired for a few years, that the writers of the still untested MyFair Lady went to see her to convince her to play Eliza Doolittle. She flat out refused. That role, of course, would have made her famous all over again, an international superstar, a brilliant comet racing across the show business sky.

The strength of the play is its show biz history. You get a wonderful education in how the old movie studio system worked, how child actors were educated at special studio schools how stars had homes built for them right on the film sets. Impressive money could be made, too. The play should be subtitled Show Biz History 101.

If you ever notice that one of Deanna Durbin’s movies is on television, a rarity, catch it. This girl could sing!

PRODUCTION: The play, originally staged in the Fringe Festival is produced by the Soho Playhouse. Piano and musical arrangements: Bennett Paster, Graphic Design: Christache Ross. The play had a three week run and will be staged again at some U.S. theater.