Frank Ramsey: A Genius By All Tests for Genius

Cheryl Misak is University Professor and Professor of Philosophy at the University of Toronto. She has written extensively on American pragmatism, truth theory, ethics, and philosophy of medicine. Her latest book is a biography: Frank Ramsey: A Sheer Excess of Powers. 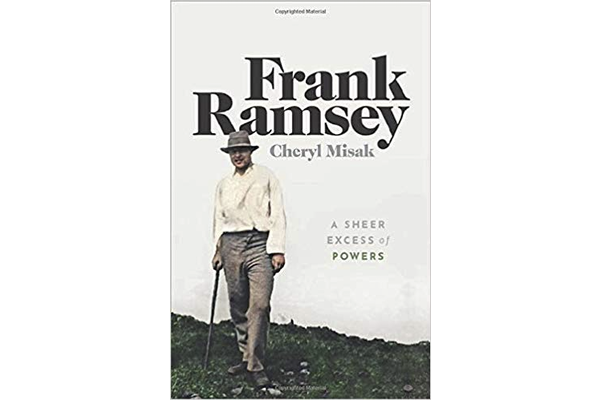 It is hard to get our ordinary minds around the achievements of the great Cambridge mathematician, philosopher, and economist, Frank Ramsey. He made indelible contributions to as many as seven disciplines: philosophy, economics, pure mathematics, mathematical logic, the foundations of mathematics, probability theory, and decision theory. My book Frank Ramsey: A Sheer Excess of Powers, tells the story of this remarkable thinker. The subtitle is taken from the words of the Austrian economist Joseph Schumpeter, who described Ramsey as being like a young thoroughbred, frolicking with ideas and champing at the bit out of a sheer excess of powers.  Or as another economist, the Nobel Laureate Paul Samuelson said ‘Frank Ramsey was a genius by all tests for genius’.

Ramsey led an interesting life in interesting times. He began his Cambridge undergraduate degree just as the Great War was ending; he was part of the race to be psychoanalyzed in Vienna in the 1920s; he was a core member of the secret Cambridge discussion society, the Apostles, during one of its most vital periods; as well as a member of the Bloomsbury set of writers and artists and the Guild Socialist movement. He lived his life via Bloomsbury’s open moral codes and lived it successfully.

The economist John Maynard Keynes identified Ramsey as a major talent when he was a mathematics student at Cambridge in the early 1920s. During his undergraduate days, Ramsey demolished Keynes’ theory of probability and C.H. Douglas’s social credit theory; made a valiant attempt at repairing Bertrand Russell’s Principia Mathematica; and translated Ludwig Wittgenstein’s Tractatus Logico-Philosophicus, and wrote a critique of the latter alongside a critical notice of hat still stands as one of the most challenging commentaries of that difficult and influential book.

Keynes, in an impressive show of administrative skill and sleight of hand, made the 21-year-old Ramsey a fellow of King’s College at a time when only someone who had studied there could be a fellow. (Ramsey had done his degree at Trinity).

Ramsey validated Keynes’ judgment. In 1926 he was the first to figure out how to define probability subjectively and invented the expected utility that underpins much of contemporary economics. Beginning with the idea that a belief involves a disposition to act, he devised a way of measuring belief by looking at action in betting contexts. But while Ramsey provided us with a logic of partial belief, he would have hated the direction in which it has been taken. Today the theory is often employed by those who want to understand decisions by studying mathematical models of conflict and cooperation between rational and self-interested choosers. Ramsey clearly believed it was a mistake to think that people are ideally rational and essentially selfish. He also would have loathed those who used his results to argue that the best economy is one generated by the decisions of individuals, with minimal government intrusion. He was a socialist who favored government intervention to help the disadvantaged in society.

In addition to his pioneering work on decisions made under uncertain conditions, Ramsey with encouragement from Keynes wrote two pathbreaking papers for the latter’s Economic Journal. The first, “A Contribution to the Theory of Taxation” founded the sub-field of optimal taxation and laid the foundation for the field of macro-public finance, so much so that any research problem about optimal monetary or fiscal government policy is now called a Ramsey Problem. The second, “Mathematical Theory of Saving” founded the field of optimal savings by trying to determine how much a nation should save for future generations. This work on intergenerational justice has been expanded and improved upon by economic luminaries such as Kenneth Arrow, Partha Dasgupta, Tjalling Koopmans, and Robert Solow. As Ramsey suggested, the theory has been applied not only to income, but also to exhaustible resources such as the environment, resulting in yet another new sub-discipline in economics called ‘optimal development’.

Ironically, Ramsey told Keynes that it was a waste of time to write these papers, as he was preoccupied with much more difficult work in philosophy, and didn’t want to be distracted.

His contributions in the latter field were enormous. Ramsey was responsible for one of the most important shifts in the history of philosophy. He had a profound influence on Ludwig Wittgenstein, persuading him to drop the quest for certainty, purity, and sparse metaphysical landscapes in the Tractatus and turn to ordinary language and human practices. Wittgenstein is one of the most influential philosophers in the history of the discipline and the shift from his early to his later position, caused by Ramsey, is one of the major signposts in the contemporary philosophical landscape.

More importantly, his own alternative philosophical views are still being mined for gems. Ramsey’s theory of truth and knowledge is the very best manifestation of the tradition of American pragmatism. His most illustrious contemporaries in philosophy—Bertrand Russell, G.E. Moore, the early Wittgenstein, and the members of the Vienna Circle—sought to logically analyze sentences so that the true ones would mirror a world independent of us. In contrast, Ramsey was influenced by C.S. Peirce, the founder of American pragmatism, who characterized truth in terms of its place in human life. When Ramsey died, he was in the middle of writing a book that is only now starting to be appreciated for its unified and powerful way of understanding how all sorts of beliefs are candidates for truth and falsity, including counterfactual conditionals and ethical beliefs. His general stance was to shift away from high metaphysics, unanswerable questions, and indefinable concepts, and move towards human questions that are in principle answerable. His approach, to use his own term, was ‘realistic’, rejecting mystical and metaphysical so-called solutions to humanity’s deepest problems in favor of down-to-earth naturalist solutions.

Although Ramsey was employed by Cambridge as a mathematician, he only published eight pages of pure mathematics. But those eight pages yielded impressive results. He had been working on the decision problem in the foundations of mathematics that David Hilbert had set in 1928. It called for an algorithm to determine whether or not any particular formula is valid or true on every structure satisfying the axioms of its theory. Ramsey solved a special case of the problem, pushed its general expression to the limit, and saw that limit very clearly. Shortly after his death, in one of the biggest moments in the history of the foundations of mathematics, Kurt Gödel, Alonzo Church and Alan Turing demonstrated that the general decision problem was unsolvable. But a theorem that Ramsey had proven along the way, a profound mathematical truth now called Ramsey’s Theorem, showed that in large but apparently disordered systems, there must be some order. That fruitful branch of pure mathematics, the study of the conditions under which order occurs, is called Ramsey Theory.

His work in mathematics and philosophy is only the tip of the iceberg. A query sent out to Twitter, asking for innovations named after Ramsey, produced an astonishing nineteen items. Most of them are technical and would take an article of their own to explain. One, however, is easily accessible. In 1999, Donald Davidson, a leading philosopher of the twentieth century,  coined the term ‘the Ramsey Effect’: the phenomenon of discovering that an exciting and apparently original philosophical discovery already has been presented, and presented more elegantly, by Frank Ramsey.

Ramsey did all this, and more, in an alarmingly short lifespan. He died at the age of 26 probably from leptospirosis (bacteria from the feces of animals) contracted by swimming in the river Cam.

His death made his friends and family (including his brother Michael, who later became Archbishop of Canterbury) question the meaning of life. Ramsey had something to say about that too. His poignant remarks in 1925 on the timeless problem of what it is to be human are just as important as his technical work:

My picture of the world is drawn in perspective, and not like a model to scale. The foreground is occupied by human beings and the stars are all as small as threepenny bits. … I apply my perspective not merely to space but also to time. In time the world will cool and everything will die; but that is a long time off still, and its present value at compound discount is almost nothing. Nor is the present less valuable because the future will be blank. Humanity, which fills the foreground of my picture, I find interesting and on the whole admirable. I find, just now at least, the world a pleasant and exciting place. You may find it depressing; I am sorry for you, and you despise me. But [the world] is not in itself good or bad; it is just that it thrills me but depresses you. On the other hand, I pity you with reason, because it is pleasanter to be thrilled than to be depressed, and not merely pleasanter but better for all one’s activities.

Unlike his friends Russell and Wittgenstein who focused on the vastness and the unknowability of the world, Ramsey believed it was more important to concentrate on what is admirable and conducive to living a good life. Rather than focus on a ‘oneness’ or God, like his brother Michael, he thought the good life was to be found within our human, fallible, ways of being.