Gregory A. Daddis is a retired U.S. Army colonel who served in both Operations Desert Storm and Iraqi Freedom. He is a professor of history and director of Chapman University’s MA Program in War and Society, and the author of Withdrawal: Reassessing America’s Final Years in Vietnam. 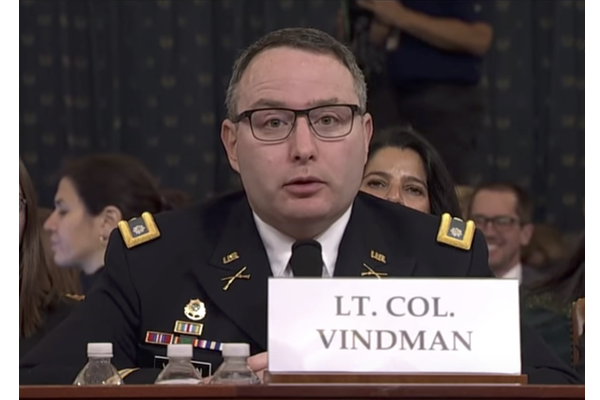 When news broke back in November 2019 that U.S. Army Lt. Col. Alexander Vindman would be offering testimony at the House impeachment inquiry of President Donald Trump, it didn’t take long for many conservative pundits to attack the National Security Council official’s patriotism.

Fox News stalwarts Laura Ingraham and Brian Kilmeade led the charge, publicly intimating that Vindman, despite being wounded in Iraq and earning a combat infantryman’s badge, might be a Ukrainian double agent. More recently, Tennessee Sen. Marsha Blackburn shared a tweet claiming: “Do not let the uniform fool you. He is a political activist in uniform.”

While perhaps an indication of our current toxic political environment, the attacks on “unpatriotic” veterans like Vindman—which have continued unabated into this year—actually have a long and checkered history in post-World War II America. Citizens may reflexively honor their countrymen and women who have served—and continue to serve—our nation in uniform, but they too often are eager to attack those who don’t fit their preconceived notions about what it means to be a veteran.

For those who break socially sanctioned views of the “patriotic” veteran, public wrath can be as swift as it is outraged. Along with Vindman, two examples illustrate this point: Ron Kovic, Vietnam War veteran and author of the bestselling memoir Born on the Fourth of July, and recently retired U.S. Army major Danny Sjursen.

Kovic is paralyzed from the chest down, wounded in Vietnam as a 22-year old who believed he was defending the world against the evils of communism. Sjursen suffers from PTSD, the result of losing soldiers under his command in combat.

Both love their country, though not in the jingoistic way perpetuated by Lee Greenwood songs or NFL pre-game flyovers. And both have suffered for speaking out against war, for not playing their assigned roles as the “patriotic” veteran.

A popular narrative holds that after the Vietnam War, in part because of their collective guilt, Americans became more supportive of veterans, even though they might oppose military interventions overseas. Yet a comparison of Kovic and Sjursen suggests otherwise.

After returning home from Vietnam, a grievously-wounded Kovic suffered through a painful recovery in VA hospitals as he increasingly turned against the war. Though wheelchair bound, he was manhandled while participating in antiwar protests, even being forcibly jolted about by Secret Servicemen at the 1972 Republican party national convention. When he, and fellow Vietnam Veterans against the War members, started chanting “Stop the war, stop the bombing,” a delegate wearing a “Four More Years” button ran up to Kovic and spat in his face.

Kovic, however, was far from alone. Other antiwar Vietnam veterans endured similar abuse. As protest marchers demonstrated in New Jersey over Labor Day weekend in 1970, a World War II veteran shouted at them: “You men are a disgrace to your uniforms. You’re a disgrace to everything we stand for. You ought to go back to Hanoi.” Apparently, those who fought in war were not allowed to speak out against war.

Nearly fifty years later, Sjursen published a piece in the Los Angeles Times condemning U.S. policies overseas. The op-ed asked readers to consider the consequences of our nation being “engaged in global war, patrolling an increasingly militarized world.” Sjursen’s tone was raw, as he passionately sought alternatives to a foreign policy committing the United States to seemingly endless war.

The public reactions were not simply ad hominem attacks against the Iraq-Afghanistan veteran, but denigrating, hard-hearted, and downright malicious. One popular Facebook page that shares defense-related news posted Sjursen’s op-ed. Of the roughly 200 comments, nearly all were disapproving. Some called the major “pathetic,” “bitter,” and “sour grapes,” while one critic, noting that Sjursen likely had PTSD, claimed he was a “progressive” who had just “decided to become a victim.” One detractor evidently spoke for many—“the Army is better off with him in retirement.”

The experiences of Kovic, Sjursen, and Vindman are noteworthy and should force us to ask some serious questions about the relationships with veterans from our armed forces. From where did our expectations about veteran patriotism and conformity emerge and harden? Has the current fissure in our domestic politics extended to the veteran community, so that if we disagree with members of our all-volunteer force, we reflexively assail their devotion to country?

This is not at all to argue that a military uniform automatically confers upon its wearer an elevated public status in which they are honored regardless of their actions. The recent case of Edward Gallagher, the Navy Seal accused of murder yet acquitted of charges, demonstrates the importance of our armed forces being held to the highest of standards when conducting military operations abroad. When President Trump personally intervened in Gallagher’s case, former NATO supreme commander, Adm. James Stavridis, worried publicly—and rightfully so—that the commander-in-chief’s decision would diminish “American moral authority on the battlefield to our detriment internationally.”

Gallagher, however, wasn’t speaking out against U.S. foreign policy or debating issues of national security, rather engaging in a social media campaign to protect his own self-interests. All the while, the same conservative media outlets which so vigorously attacked Vindman championed Gallagher’s cause with equal vigor. Might there be a connection?

There seems to be something in our current state of domestic politics wherein veterans automatically earn an entitlement to public admiration, while simultaneously losing some of their basic rights of citizenship, particularly their right to voice dissent. Active-duty servicemembers long have had to forfeit some of their freedoms of speech, the Uniform Code of Military Justice (UMCJ), for instance, prohibiting “contemptuous words” against public officials like the president or members of Congress.

Yet to return to Kovic and Sjursen, their dissent against American foreign policy was censured not from within the military, but from those outside who sought to define and then rigorously police the expectations for “appropriate” veterans’ behavior and politics.

There’s a critical point to be teased out in all this, which is that people without the experience of directly fighting wars and serving in uniform are disallowing actual veterans from a conversation about future wars and armed conflict.

This silencing has extended to any dissent that is not in favor of militarism, even when it comes from the very people whose direct wartime experiences have shaped their opposition to intervention, armed nation-building, and war more generally. Who does that leave, we might ask, to speak out against U.S. military action overseas? Has it become impossible to question and debate our national security strategy while being “patriotic” at the same time?

It seems important, then, that we probe more deeply the contradictions in the relationship we have with our veterans. Despite their often audacious communal outpouring of support, far too many Americans prefer to laud only those vets who are unabashedly patriotic and completely silent about any concerns they have with U.S. foreign policy.

Of course, the unfortunate reality is that we want to be inspired by stories of young men and women’s “perseverance through combat.” We are heartened by tales linking national security and pride to the resolve of hearty individuals willing to sacrifice for the greater good. And, in the same vein, we are disappointed when soldiers, like one Vietnam veteran, return home and share that they “felt it was all so futile.”

In short, we want to find meaning in war, a sense of purpose that makes us feel better about ourselves and our nation. To view war as less than ennobling smacks of unpatriotic apologism. Thus, we attack the iconoclastic veteran-messenger without listening to their actual message. We decry the “broken” vet who somehow makes us look bad by not waving the red, white, and blue.

But patriotism, like courage, comes in many forms. Perhaps Americans of all persuasions, political or otherwise, might challenge themselves to be more accepting of veterans’ voices who don’t accord with their own “patriotic” views.

Kovic, Sjursen, and Vindman fought because their nation asked them to. The least we can do is allow them to speak up when they return home and respectfully contemplate what they have to say without attacking their “patriotism.”