Who Can be An American?

Donald J. Fraser has spent a lifetime working in a variety of capacities in government. Fraser holds a bachelor’s degree in political science and a master’s degree in public policy and administration and currently teaches history through U.C. Davis’s Osher Center. He is a regular contributor to the History New Network. This article is an excerpt from his newly released book The Growth and Collapse of One American Nation. 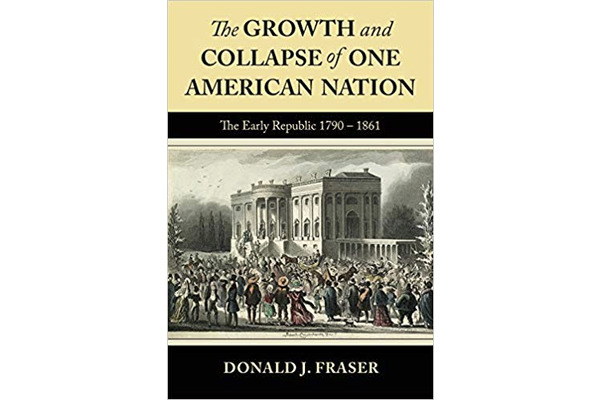 As we approach the 2020 election, we will see a replay of one of the oldest questions in our history: Who can be an American? When Barack Obama won the presidency in 2008, it appeared that this question had finally been settled, ushering in an era of post racial politics symbolized by a black man reaching the highest office in the land. But, in fact, the election of our first African American president reopened old racial wounds that were exploited by Donald Trump in 2016, who ran a divisive and fear drenched campaign that took him to the White House.

As I researched both my first and second books, I was amazed at how much this theme runs through American history. There have always been two views of what makes America a nation. One is tied to a traditional racial or ethnic view, ethnonationalism for short. The other is an ideal of America, as expressed in Jefferson’s natural rights section of the Declaration of Independence, which Gunnar Myrdal called the American Creed.

Today, the United States is religiously, culturally, and ethnically diverse. Yet we see ourselves as Americans in large part due to a creedal notion of America. In 2018, two scholars at Grinnell College “polled Americans on what they most associate with being a real American.” They found that a “vast majority of respondents identified a set of values as more essential than any particular identity.” As historian Mark Byrnes wrote for the History News Network back in 2016, “The United States is fundamentally an idea, one whose basic tenets were argued in the Declaration of Independence and given practical application in the Constitution.” These ideas revolve around liberty, equality, self-government, and equal justice for all, and have universal appeal. They are not partisan, not tied to any particular political party. Men with such differing political ideologies as Barack Obama and Lindsey Graham share in the creedal notion of America.

The universal ideals expressed in the Declaration of Independence and memorialized in the law through the Constitution and the Bill of Rights have not always been achieved, certainly not at the time they were written, and not today as we continue with the struggle to meet them. Nor are they self-actualizing. One way to view American history is as a struggle by individuals and groups to claim their share of these rights, from the abolishment of slavery, to the women’s movement to gain the vote and a share of equal rights, to today’s clash over gay and transgender rights.

Despite the strong appeal of the American Creed, 25 percent of those polled by Grinnell College held nativist views similar to those espoused by Donald Trump. The view that ethnicity and race made the United States one people predominated in the early American republic, as my book The Growth and Collapse of One American Nation explores. John Jay, in Federalist No. 2, made the argument that the United States was one nation at the time of the debate over ratification of the Constitution by appealing to ethnonationalism. He wrote that we are “one united people—a people descended from the same ancestors [the British], speaking the same language [English], professing the same religion [Protestantism]…” No doubt Jay overstated the degree of national unity at the time that the Constitution was being debated, and also the extent to which the original thirteen colonies were solely of British origin.

The ethnonationalist perspective cannot describe the United States today—it was inaccurate even in 1790, when we were already a diverse people. While white Anglo-Saxon Protestant men came to dominate the United States, they were not the only ethnic or racial group present in 1790. Black people, most of them enslaved, were almost 20 percent of the total population of the South in 1790. The middle colonies were quite diverse, made up of German and Dutch settlers.

Immigration is another hot button issue in the United States, not just today but also in our past. Many of the founders were skeptical about new immigrants that were not of English stock. Benjamin Franklin complained about German immigrants, the “Palatine Boors” who swarmed “into our Settlements . . . herding together” and created a “Colony of Aliens.” “Thomas Jefferson doubted that he shared the same blood as the ‘Scotch’ and worried about immigrants from the wrong parts of Europe coming to the United States,” Francis Fukuyama has written. Nativist movements would rise during periods of large-scale immigration, such as the 1850’s when the Know Nothing Party competed for power.

While ethnonationalism has deep roots in the United States, so too does the American Creed. Jay noted how the United States was “attached to the same principles of government.” To Thomas Paine, the country was drawn from “people from different nations, speaking different languages” who were melded together “by the simple operation of constructing governments on the principles of society and the Rights of Man.” Washington saw America as a place that was “open to receive not only the Opulent and respectable Stranger, but the oppressed and persecuted of all Nations and Religions.”

We Americans have always struggled with our composition as a nation of immigrants. For the newly arrived and people of color, America has not always been a welcoming place. Black people were brought here as slaves, and native peoples were overrun as the insatiable desire for land led to ever-greater westward expansion. Nonwhites were excluded from being members of the nation during the early Republic. In the Supreme Court’s Dred Scott decision issued in 1857 on the eve of the Civil War, Chief Justice Taney found that no black person, whether free or slave, could be a citizen of the United States. It is often considered by scholars as the worst decision in our history. Fukuyama goes so far as to say that the “American Civil War was, at its root, a fight over American national identity. The Southern states explicitly linked identity to race by excluding nonwhites from citizenship.” The North, which had largely eliminated slavery, was also racist, treating free blacks as second class citizens. The rise of the abolitionists in the 1830s would eventually lead to the formation of the Republican Party in the 1850s, a group committed to stopping the spread of slavery. Abraham Lincoln would become one of the party’s leaders, a man committed to a creedal view of America who believed that the rights enshrined in the Declaration of Independence applied to all people, black and white, native born and immigrant. His election would also lead to a Civil War over the issue of slavery.

The sense of being one nation was fragile during the early Republic, and it continues to be so in the early twenty-first century. Too often, we view those we disagree with as enemies, as members of a different nation. That was the challenge our ancestors faced too, and they allowed their differences to devolve into the Civil War. Perhaps that struggle was inevitable, since the overriding moral issue of their time, slavery, had to be eliminated. Today, we continue to face the problems of our heritage, especially racial prejudice, born out of historical experience. Perhaps lessons can be learned from history that will help in finding ways to work together for the common good.

The challenge of our times, especially in the upcoming 2020 election, is to continue our commitment to a creedal vision of America. We need to make a reality of the opening words of our Constitution, that “We the People” means all people who share the American Creed, regardless of race, ethnicity, or religion, and to constantly strive to unleash, in Lincoln’s words, “the better angels of our nature.”